Since we planned to go to Vietnam, we were supposed to have come through Cambodia from the south, via Phnom Penh. Time was against us, so we decided to just go to Siem Reap, where the remarkable Angkor Watt temple complex resides.

Cambodia has gone through much of what Laos has, but to a higher degree. The people here have suffered from the Vietnam war, as well as Pol Pot with the Khmer Rouge. Cambodia is the scene of the infamous killing fields, where the Khmer Rouge systematically murdered millions of their own people. Mainly the educated, monks, political opponents. Even if you looked intelligent or wore glasses, you were murdered. The reasoning is hard to follow, but basically Pol Pot wanted to keep Cambodia an agrarian society (ie all farmers). He didn’t want the country to modernise, and to do so, he wiped out everybody who was a threat to his goals.

Pol pot is long gone now, but Cambodia still suffers his legacy of millions of land mines. People are still being maimed every day, and they say it could take 50 years to clean the countryside. It is also a very expensive exercise, and this is a poor country. There is evidence of land mine casualties everywhere, you just can’t miss them begging. Land mines are one of the most hideous things ever created, and all countries should stop making them now, but the fact is they are still being churned out by the millions by well known companies such as Fiat. Australia fortunately has had the ethics to refuse to use land mines for many years. Now if we could get all the other countries, and western nations are the worst, to stop using them, the world will be a better place. 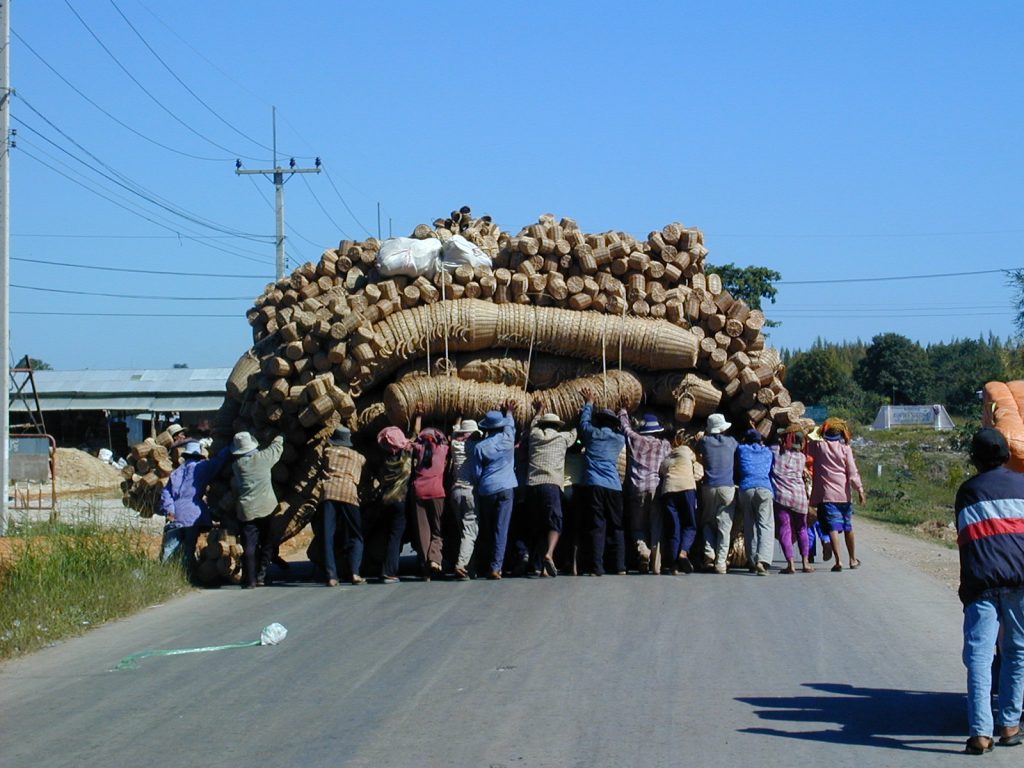 At the border town of Poipet, we saw this incredible sight. A mountain of woven baskets on a wagon 3m long, 1.2m wide at best. There were as many people in front of the cart as there were behind. 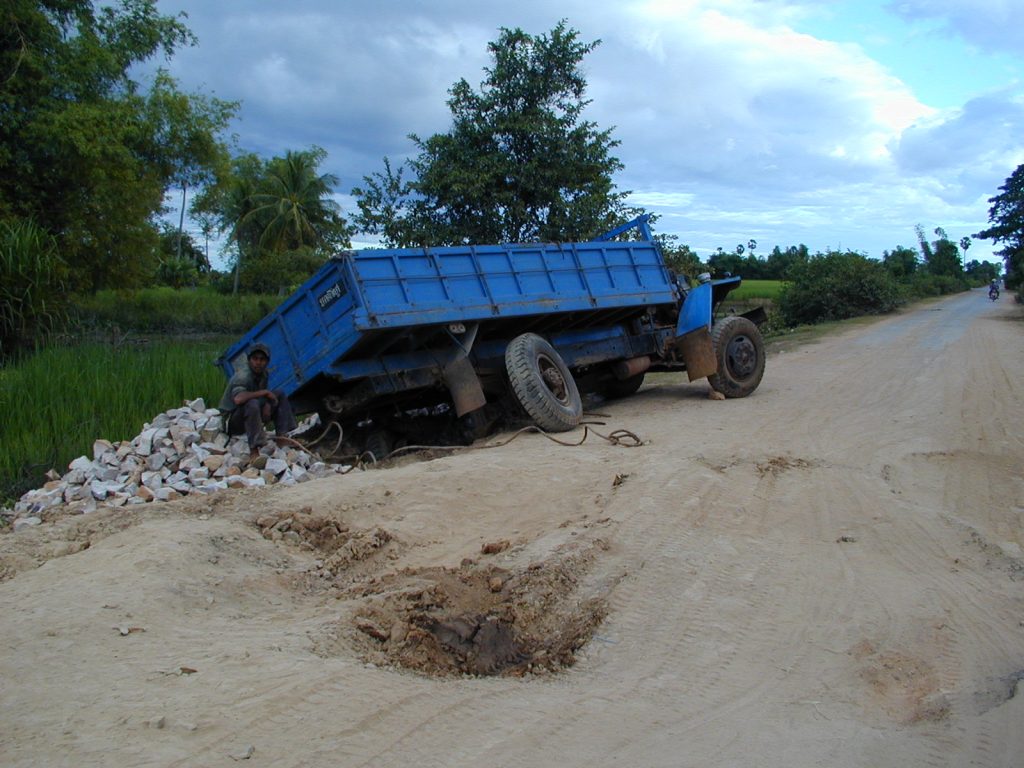 The road conditions were abysmal. This pothole ripped the axle out of the truck. 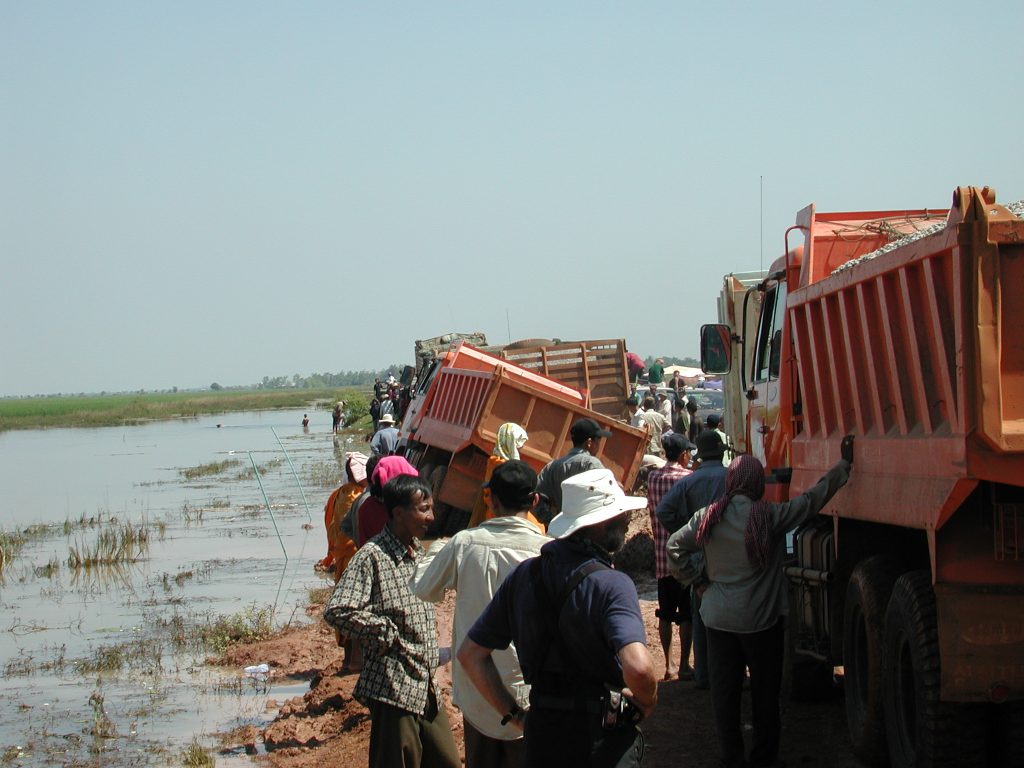 About two hours later, we encountered a collapsed bridge. Almost all the several thousand bridges in Cambodia were built by the Australian army, using temporary, modular steel frames. All the trucks are hopelessly overloaded, and eventually they succumb to metal fatigue. 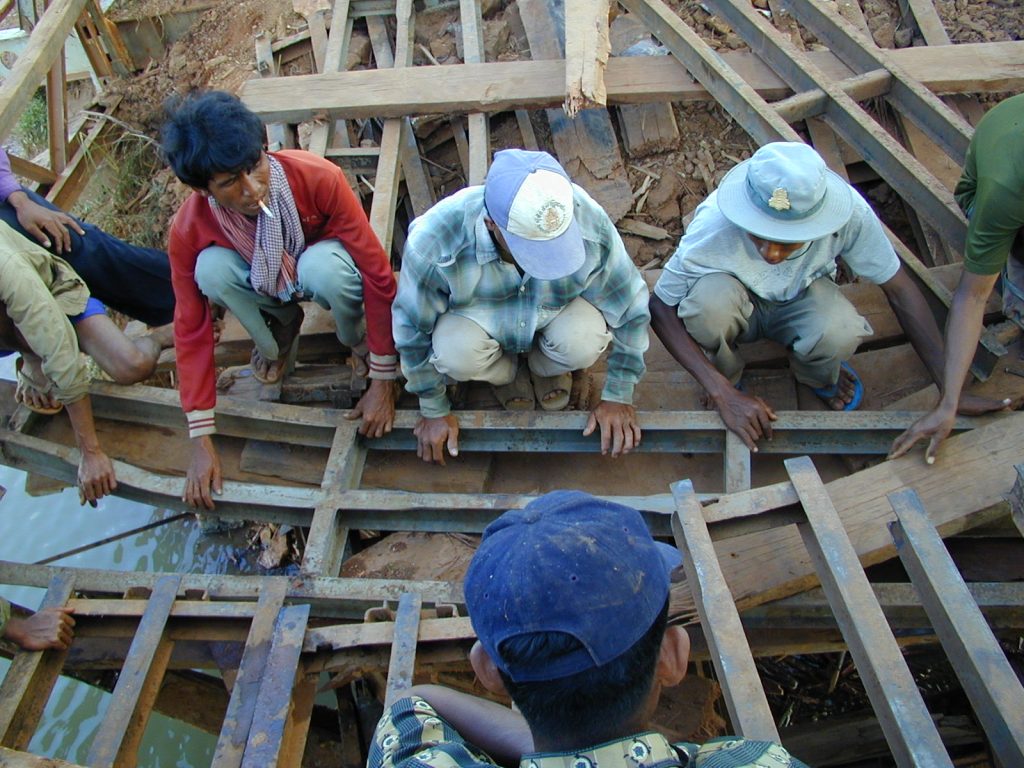 The locals trying to shore up something to get the utilities through. 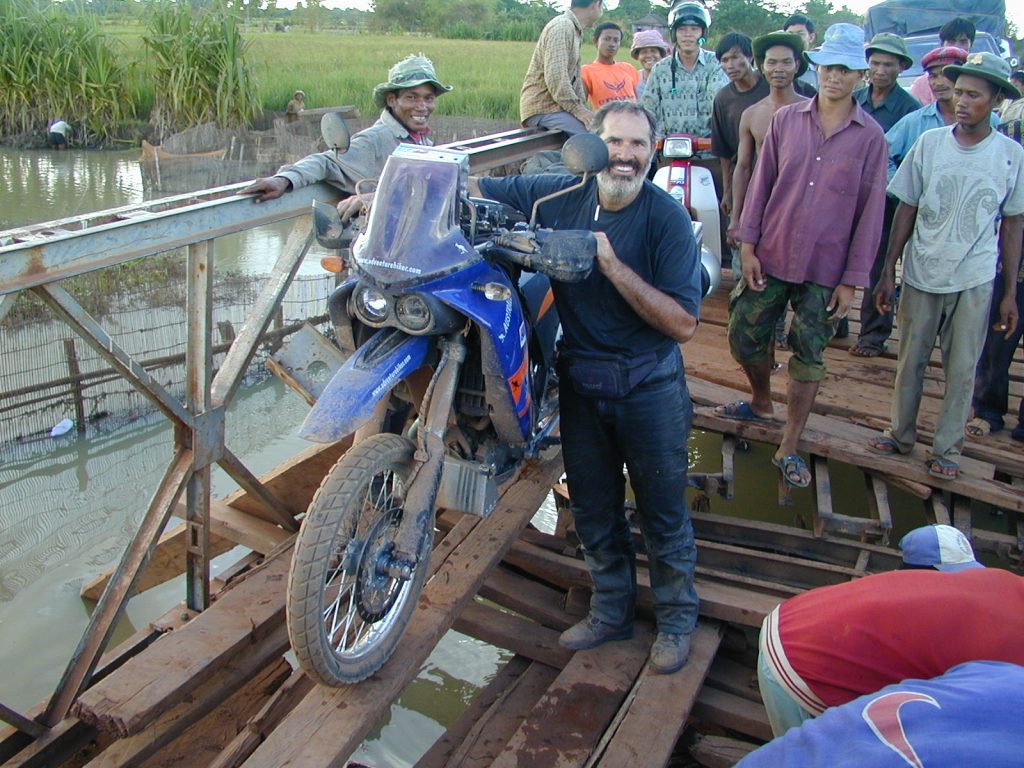 I was one of the first through, with the aid of this plank. When I first saw the damaged bridge, I was dubious of them being able to patch it up, but they did, and the utilities started flying through again, sometimes, all four wheels off the ground, and a dozen people in the back. Not the safest place in the world to travel 🙂 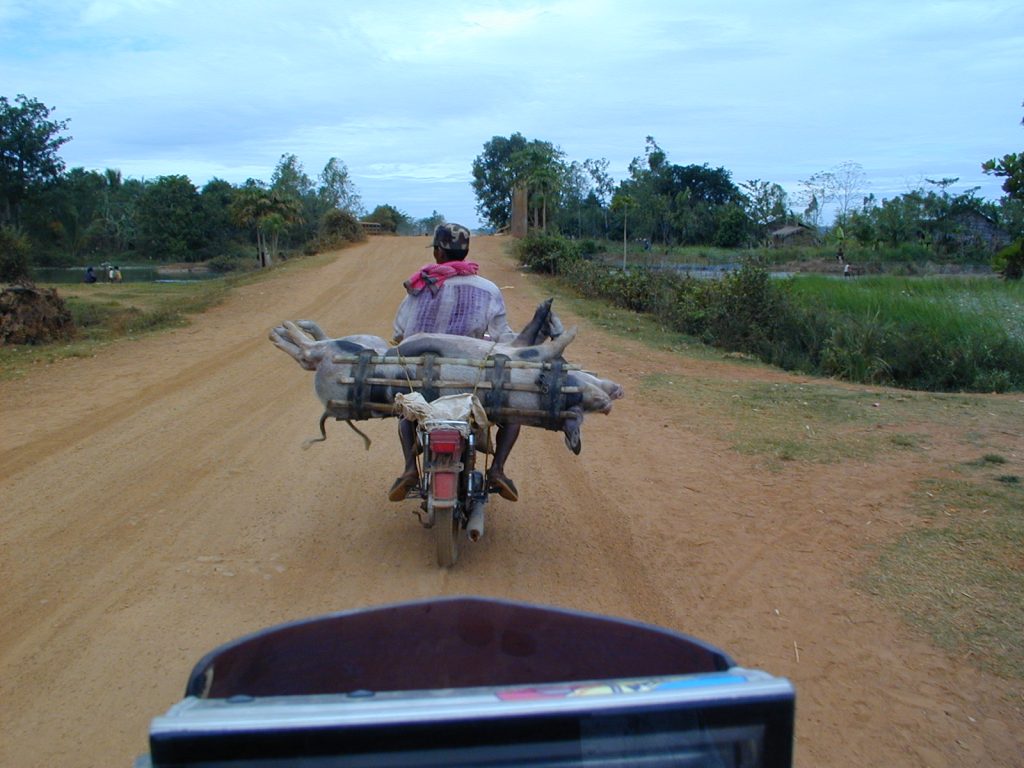 Animal rights groups would go ape about this. These two pigs are alive and screaming for all they are worth. 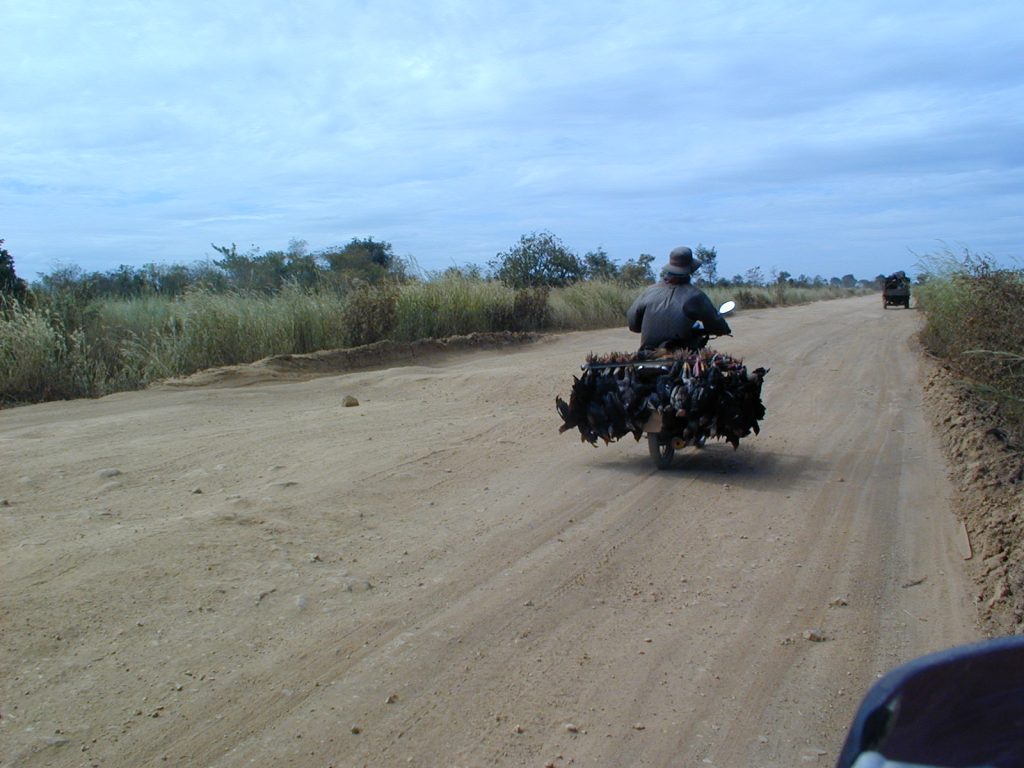 There are 6 rows of 4 chickens on each side (48), alive, and getting their heads whacked in every pothole. Fortunately, this was a rare section of smooth road, so I could take the photos one handed as I rode behind. 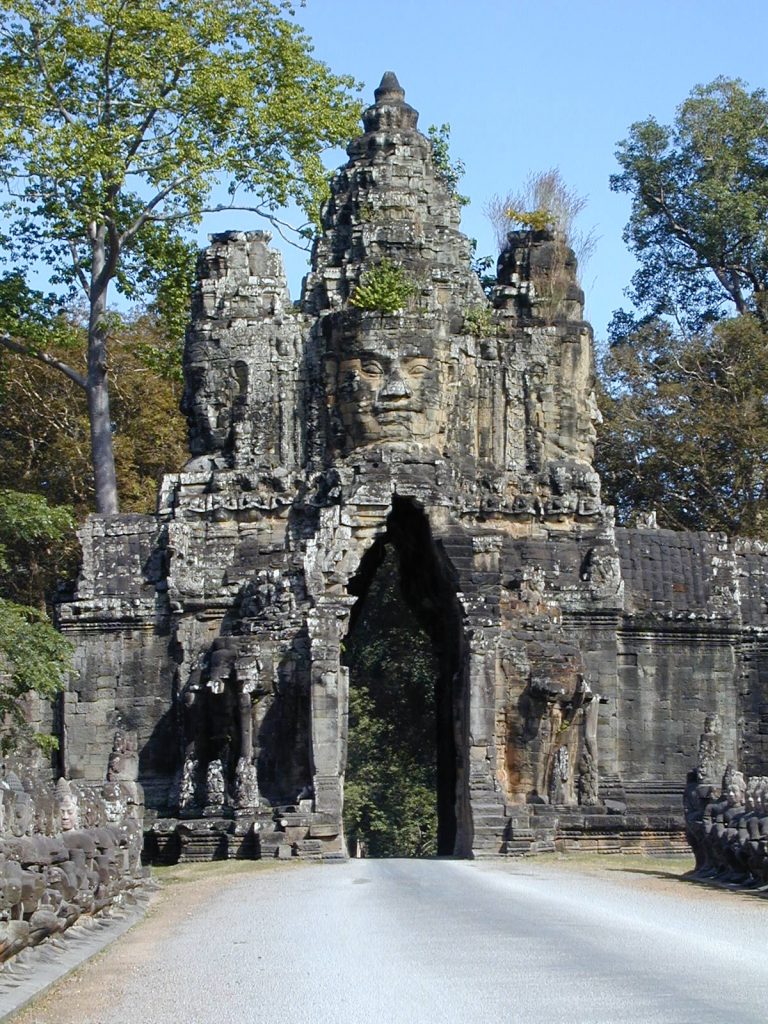 This what we came to Cambodia for. Angkor Watt. One of the man-made wonders of the world. A huge area filled with monstrous temples of sandstone) The same Khmer rulers that built similar temples in Laos and Myanmar (Burma). They were obviously very successful rulers, because these monuments would have cost a fortune in labour. They once ruled most of SE Asia, but have long since faded into oblivion. The Cambodians are mainly Khmers, and a minority of Vietnamese. The infamous Khmer Rouge is simply French for Red Khmers, or the communists.

It can take days to see everything here, but being Philistines, and having our own transport, we saw all we wanted to see in a day. We did actually see the majority of it. 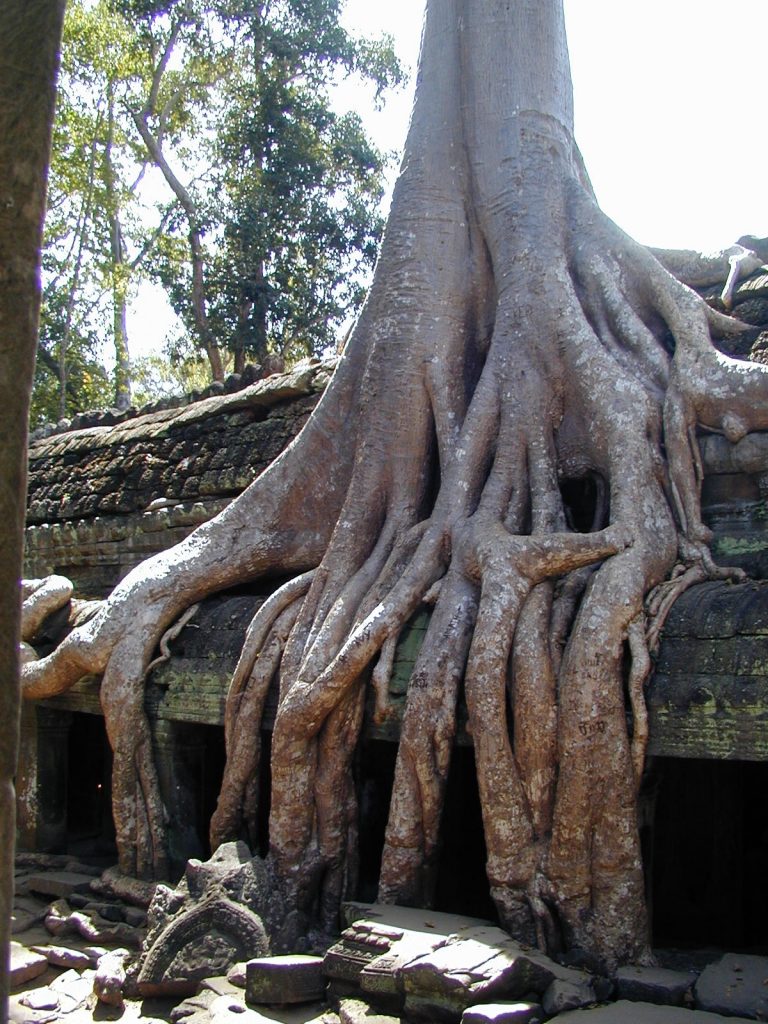 As you can see, the jungle has taken control of some areas, and most of the buildings have required a lot of restoration. Millions have been spent by the West to help preserve it. 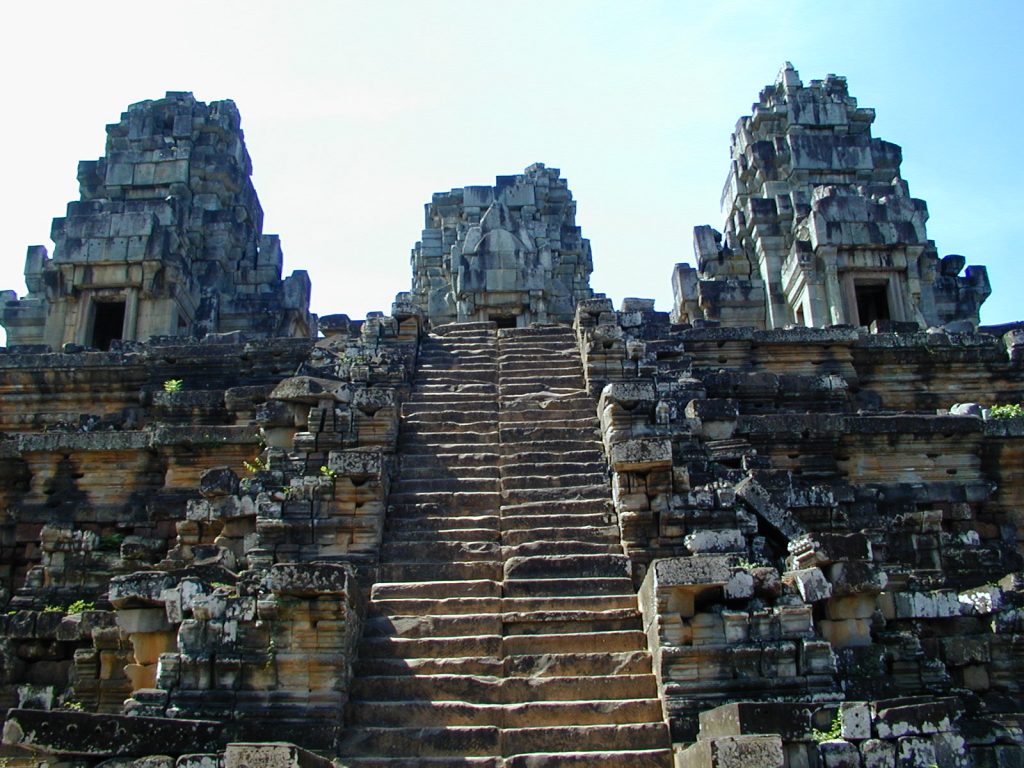 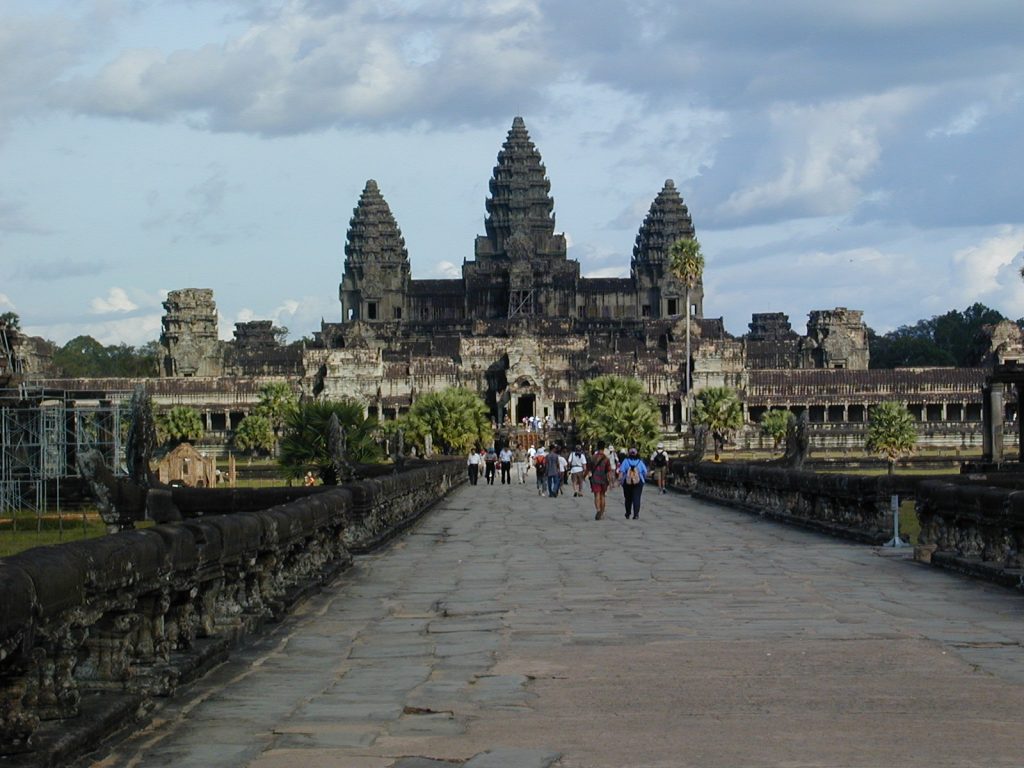 Although the area is generally referred to as Angkor Watt, this is the main temple from which the area got it’s name. Built in the 12th century, originally Hindu, but changed to Theravadin Buddhism a few centuries later. 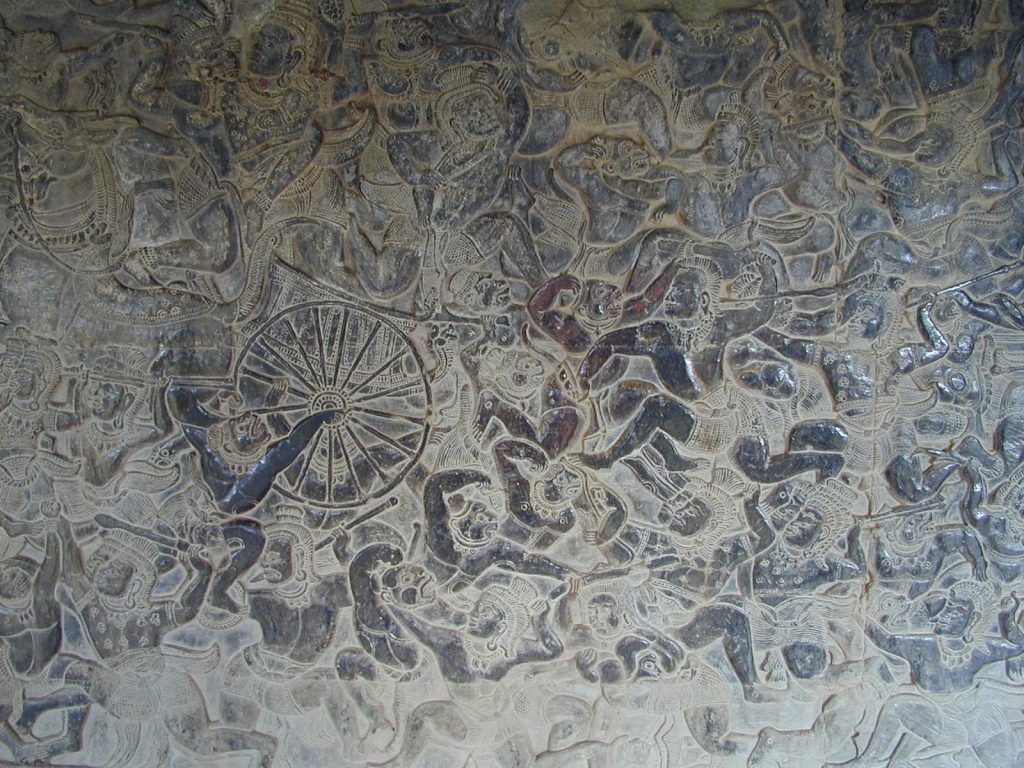 These bass reliefs are in remarkable condition. Even though they were done some 400 years are the original construction, and were by then Buddhist, these scenes are derived directly from Hindu mythology. They include the gods Vishna, Shiva and Krishna. 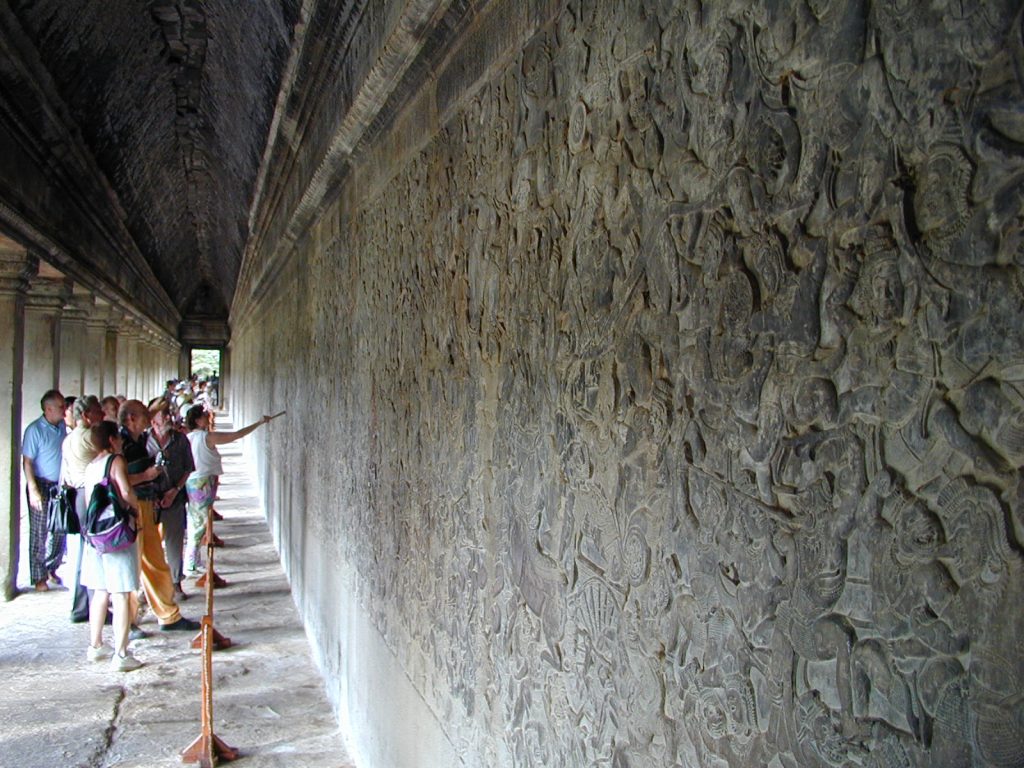 This scene depicts the Ramayana, which a Sri Lankan prince goes to battle with his monkey army to retrieve his wife Sita. 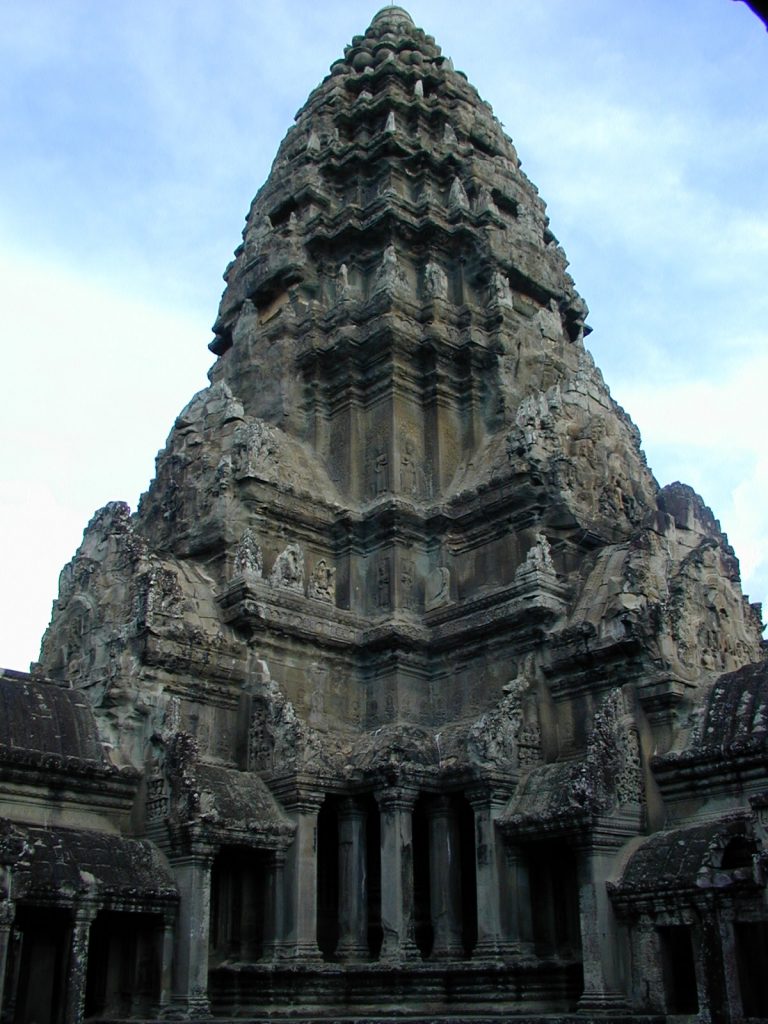 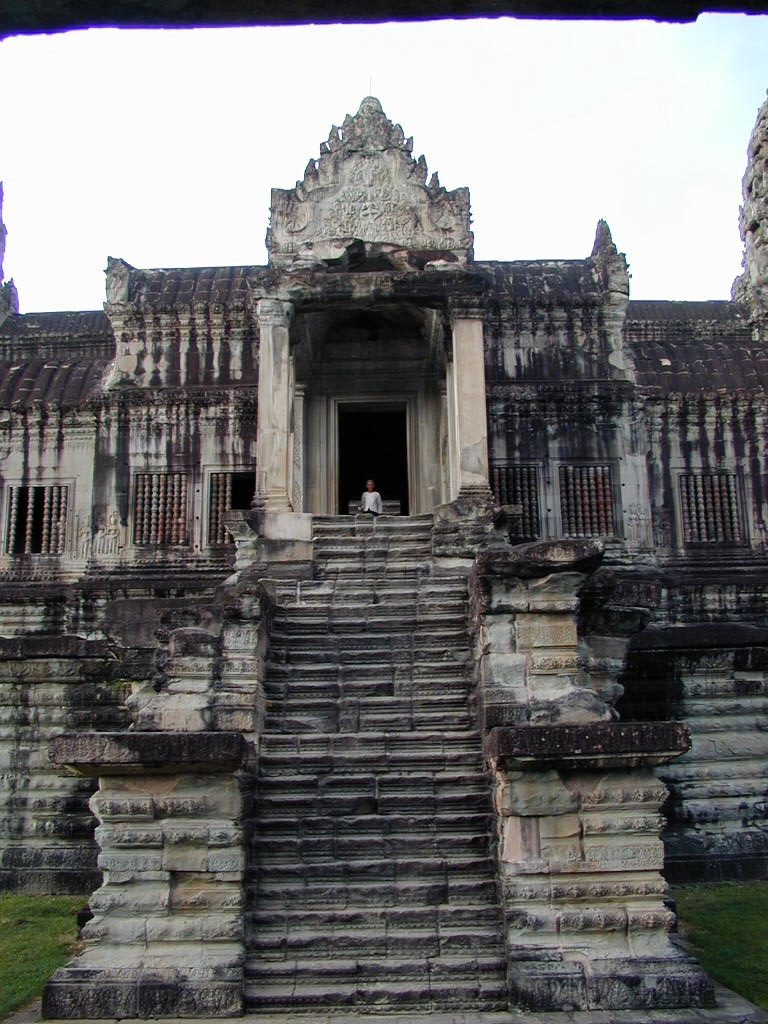 The detail, and the condition of these buildings is remarkable. Especially considering they are made of sandstone. 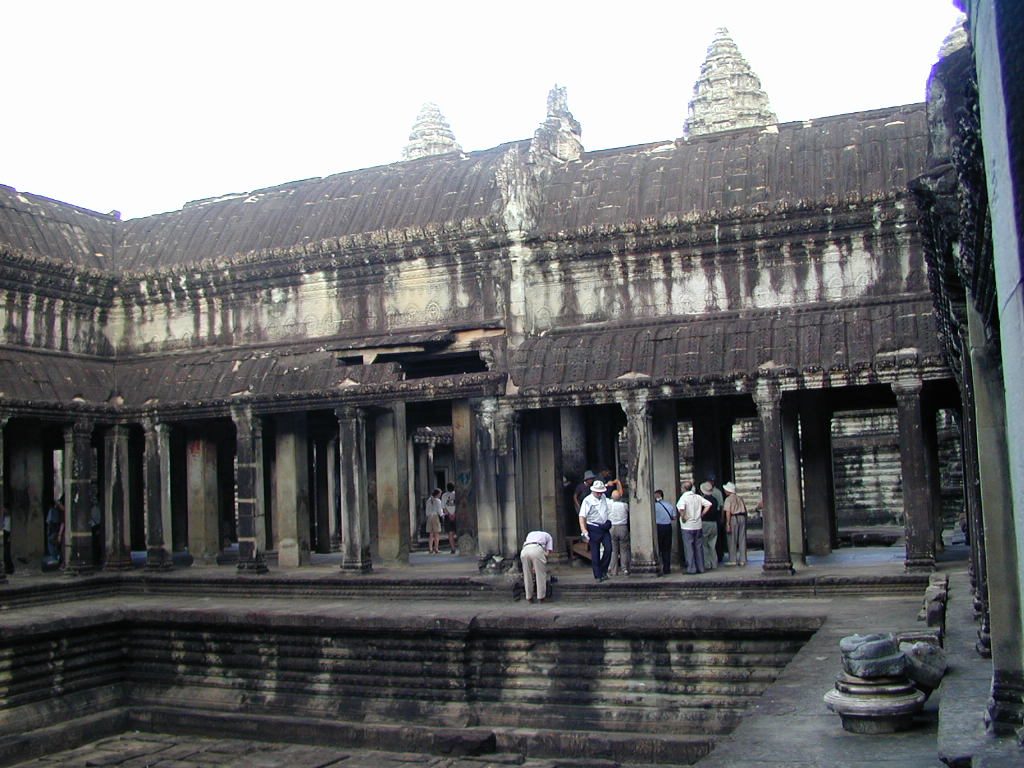 Royalty’s baths, about 1.5m deep. They are about 20m above the ground level, so someone must have had to work very hard to fill them, and this isn’t the only one. 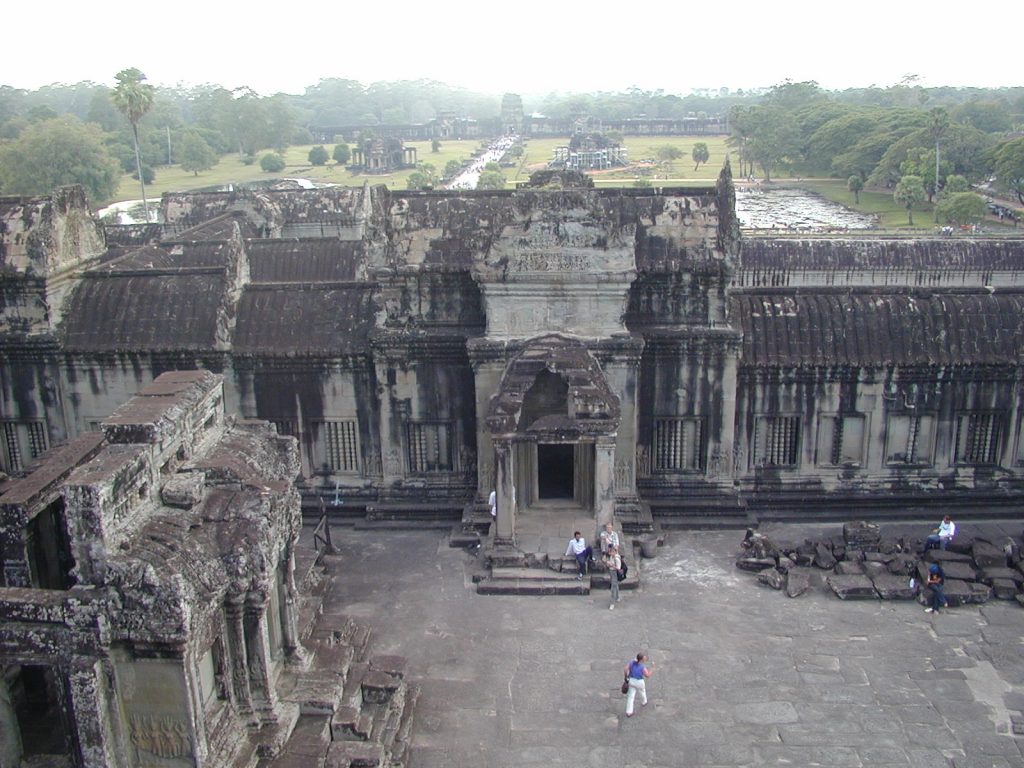 Looking down on the courtyard. 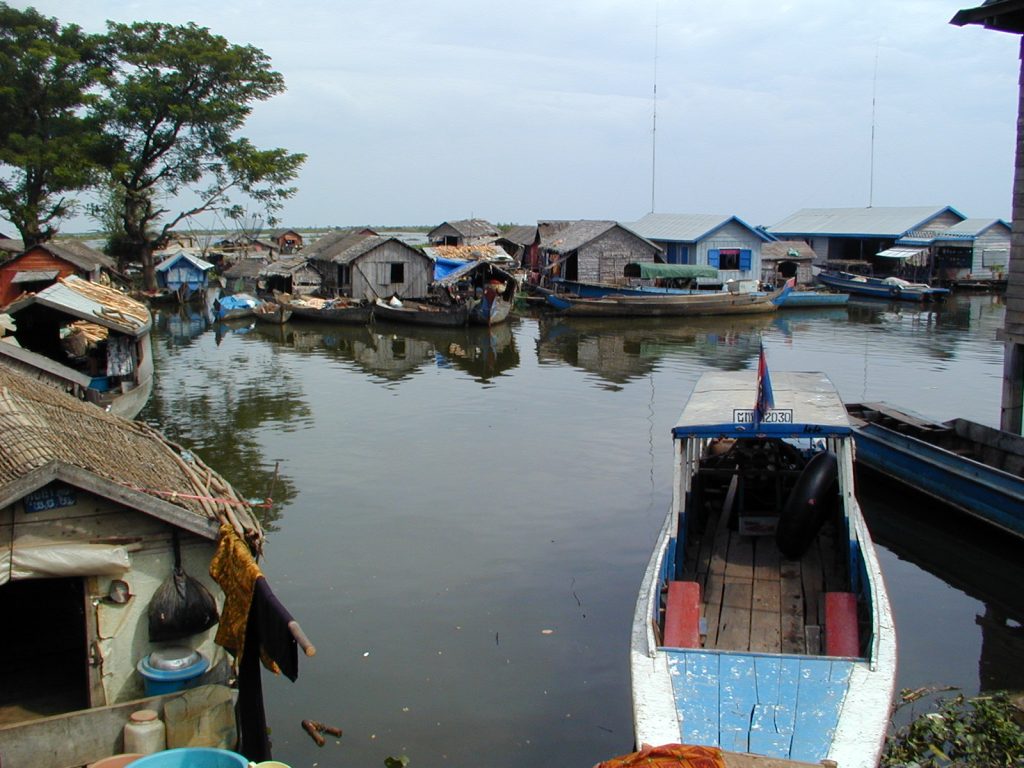 Close to Siem Reap, there is a Vietnamese fishing village. This is all part of the Mekong river, and it was several kilometres wide here. From here, ferries and barges travel down to Phnom Penh, the Capital of Cambodia. 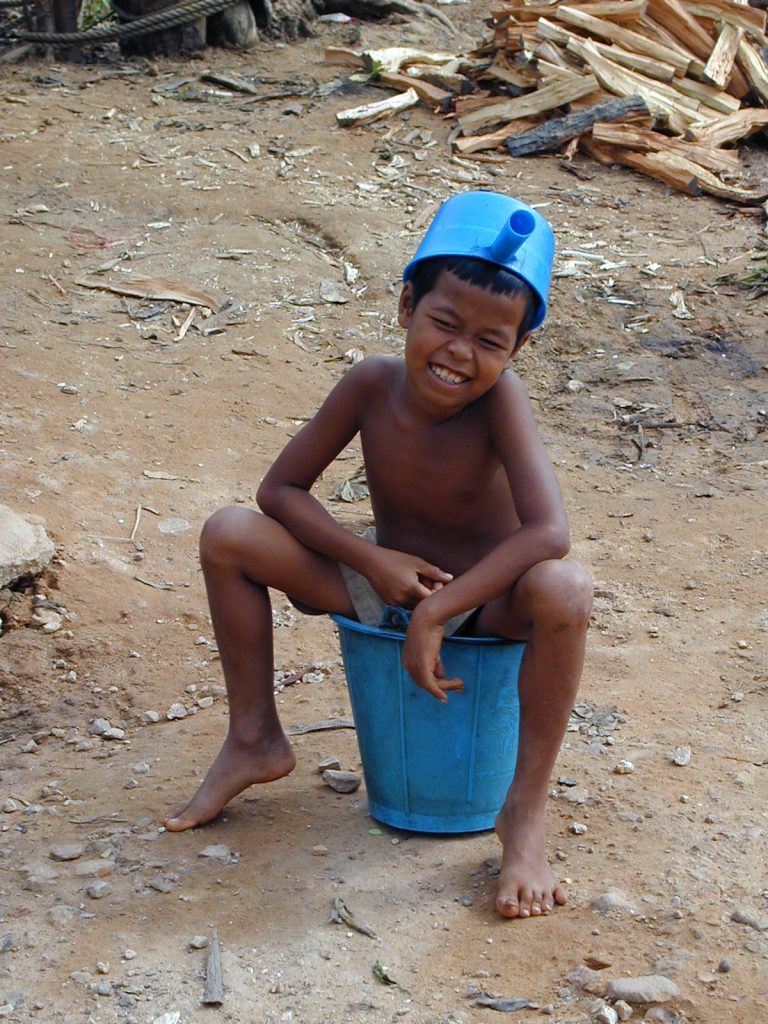 It doesn’t take much to amuse these kids. 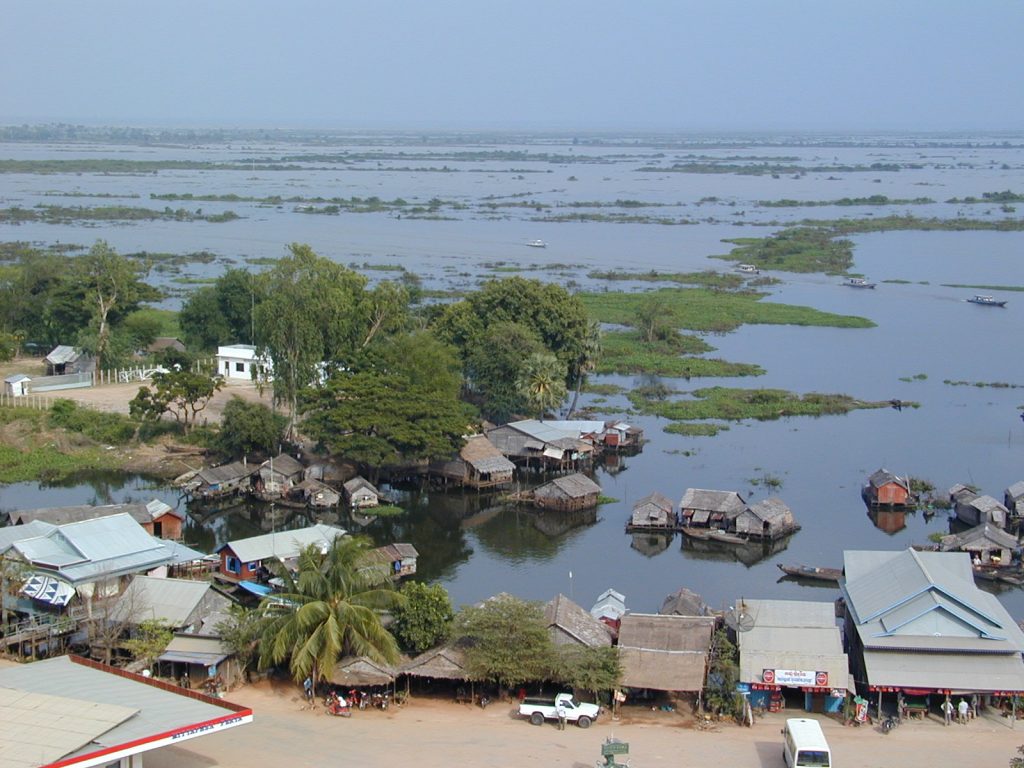 The village in the middle of the huge Mekong river. 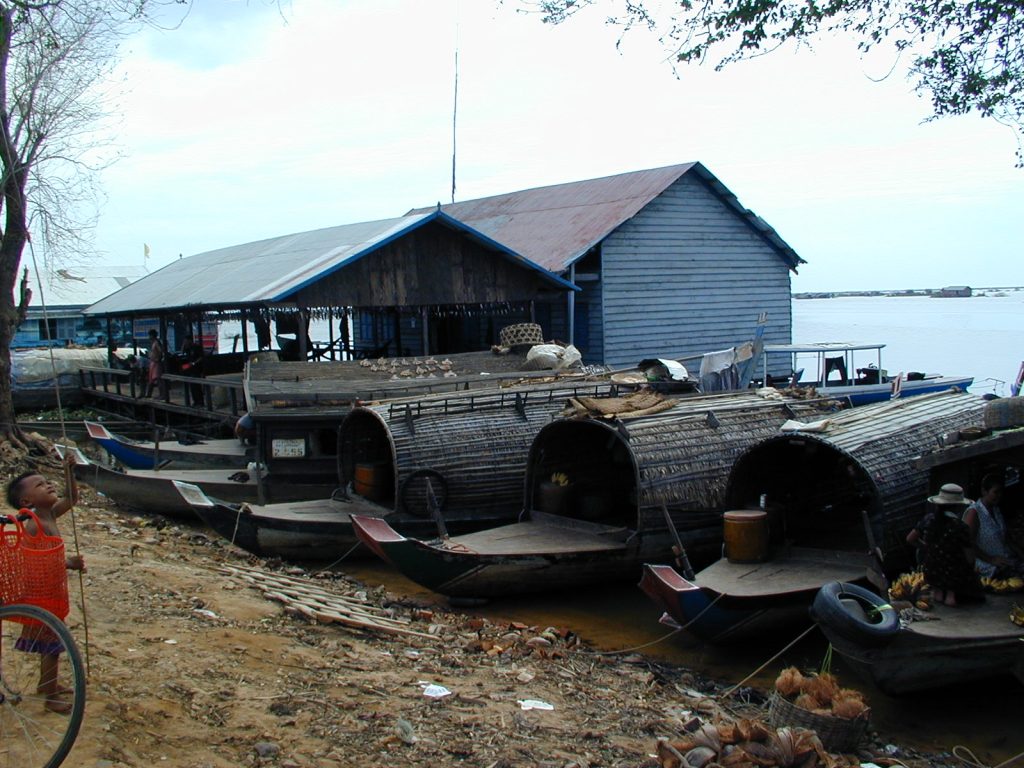 These boats are actually houses for entire families. 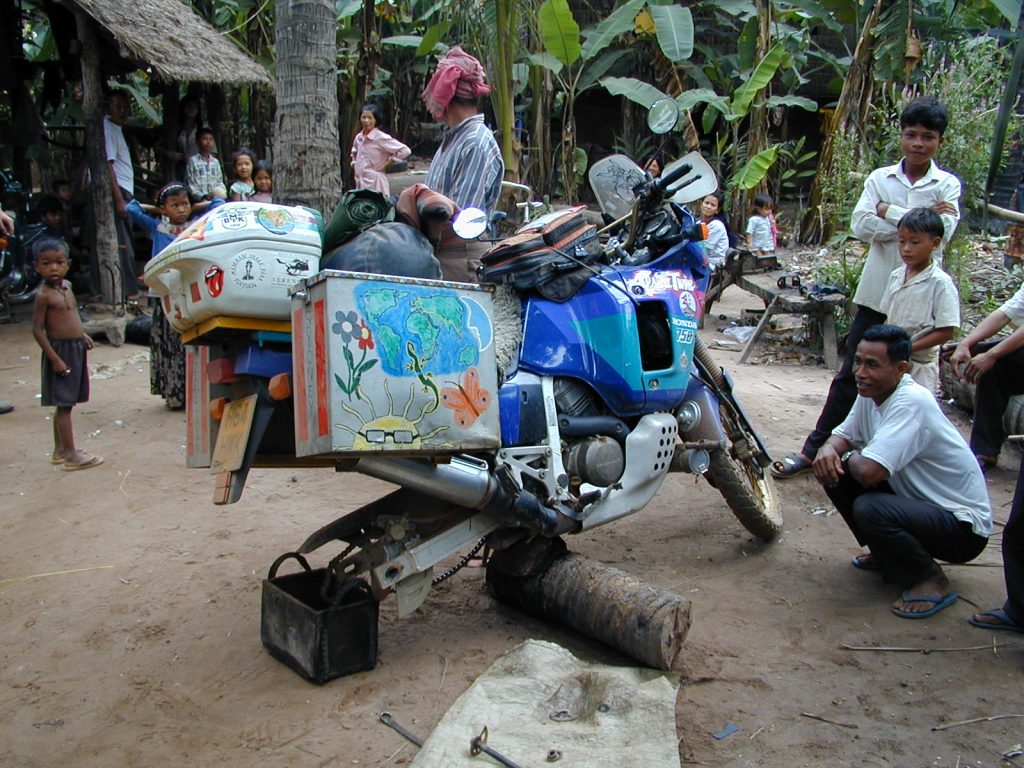 On the way back, we found that Cuan’s rear shock on the Honda had virtually no damping. It was bottoming out severely, so I blasted on ahead for an hour, then waited for him to catch up. As he pulled up, the back tyre went flat. As it happened, there was a bike mechanic literally 20m away, so we rolled it in for the repairs. Talk about coincidence. We all carry puncture repair equipment, but these guys do the job for $1, and fixing punctures is not much fun. 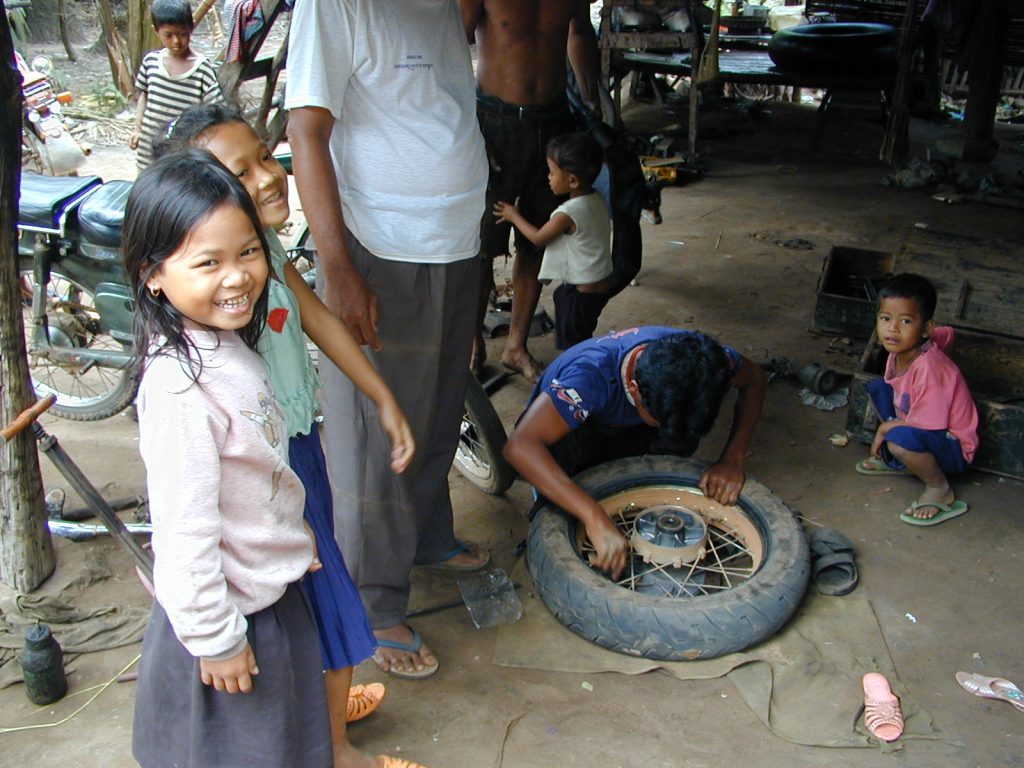 Again, we were a real novelty. Kids came out of the woodwork, and were all coy with us.

From here, we returned to Thailand, but since I’ve already covered it, the next page is Malaysia.