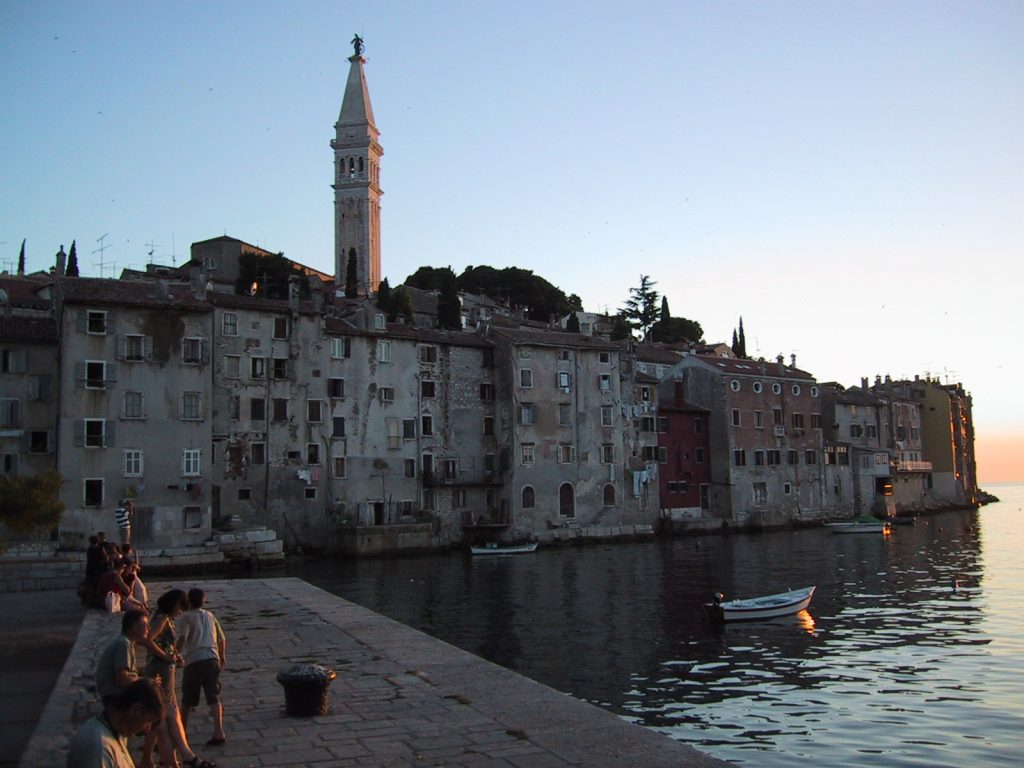 First stop, Rovinj, not far from the Slovenian border with yet another San Marco tower copy. An active fishing village with narrow cobbled picturesque streets, There are plenty of interesting historical buildings, museums, and a market in the centre of the old town for all sorts of fruit and vegetables. I stayed two nights at a good camping ground called Polari, just outside of town. Apparently, this is fairly typical of camping grounds in Europe. There are bars and restaurants everywhere, an amusement park, tennis courts and boat ramps. There are 13 islands just off Rovinj, some with resorts, and one just big enough to build a church on, so they did! Imagine in the old days having to sail or row 4 or 5 klms to go to church.
It had been very hot ,dry and windy for the last few days, and there was a haze in the air all the way from Austria. The haze was most likely from forest fires. 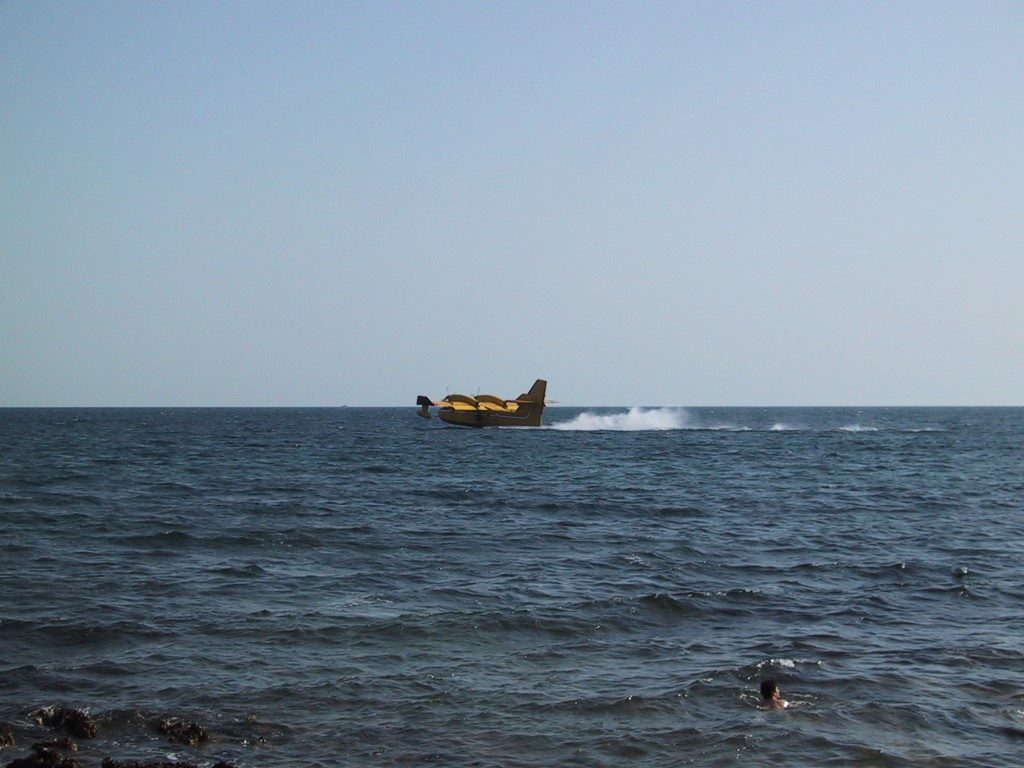 In Rovinj, I saw one fire start off in the distance. At first all I saw was a small amount of smoke, then within an hour or so, there was a front of several kilometres. After about 3 hours, the Croatian army came in with a helicopter and a sea-plane to dump water on the fire. They were scooping water just off the camp site, which provided a bit of entertainment for the campers. At times the plane was passing over us at no more than 100m. 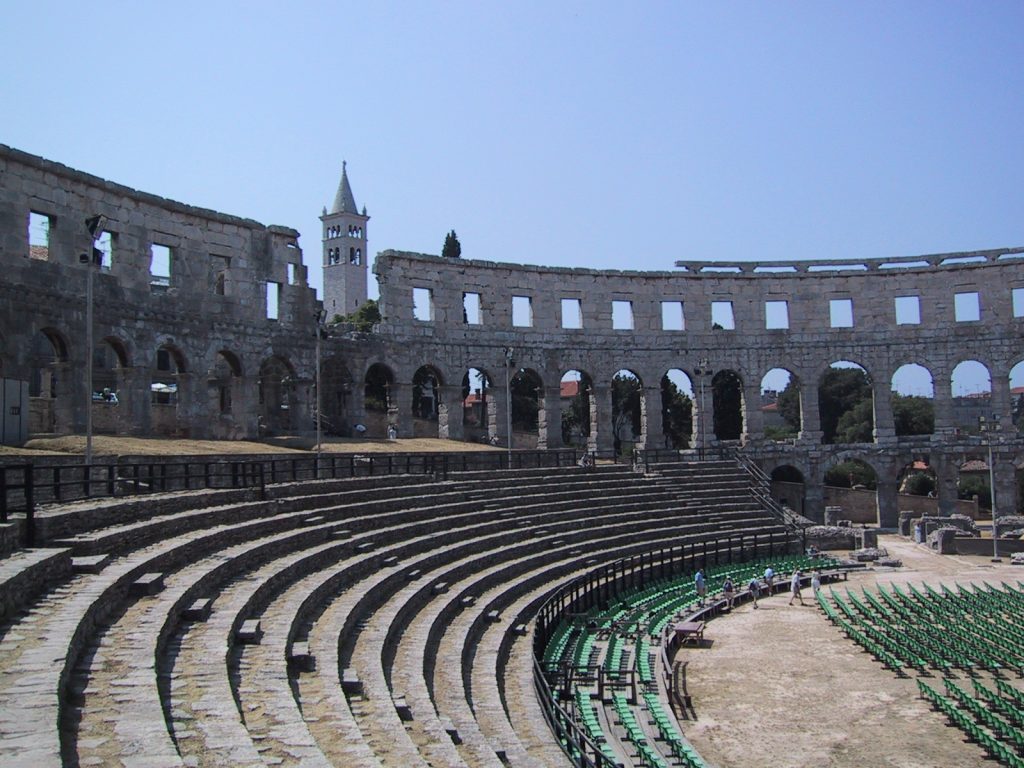 On again to Pula. Some of the best preserved Roman ruins I have seen, including this amphitheatre. 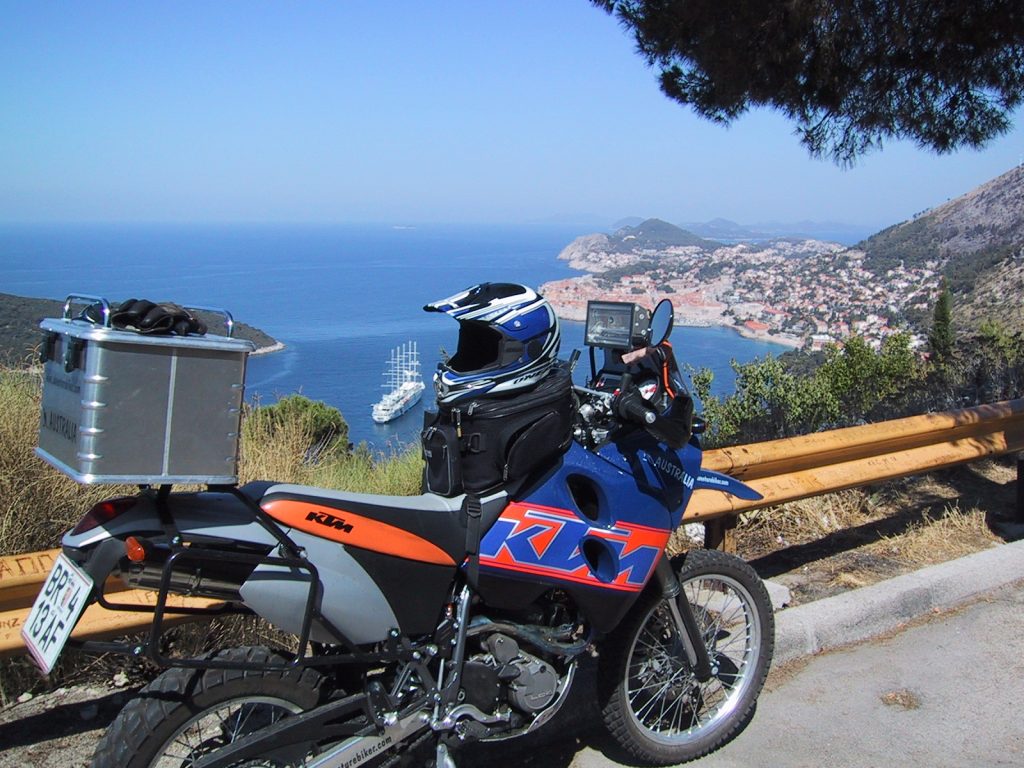 From Pula, I rolled onto Zadar, Trogir, Split, then Dubrovnik, in the background of this photo. Anyone who has been to Dubrovnik will agree with me that when you first see the city walls, you are awe-struck with their sheer size and excellent condition,. 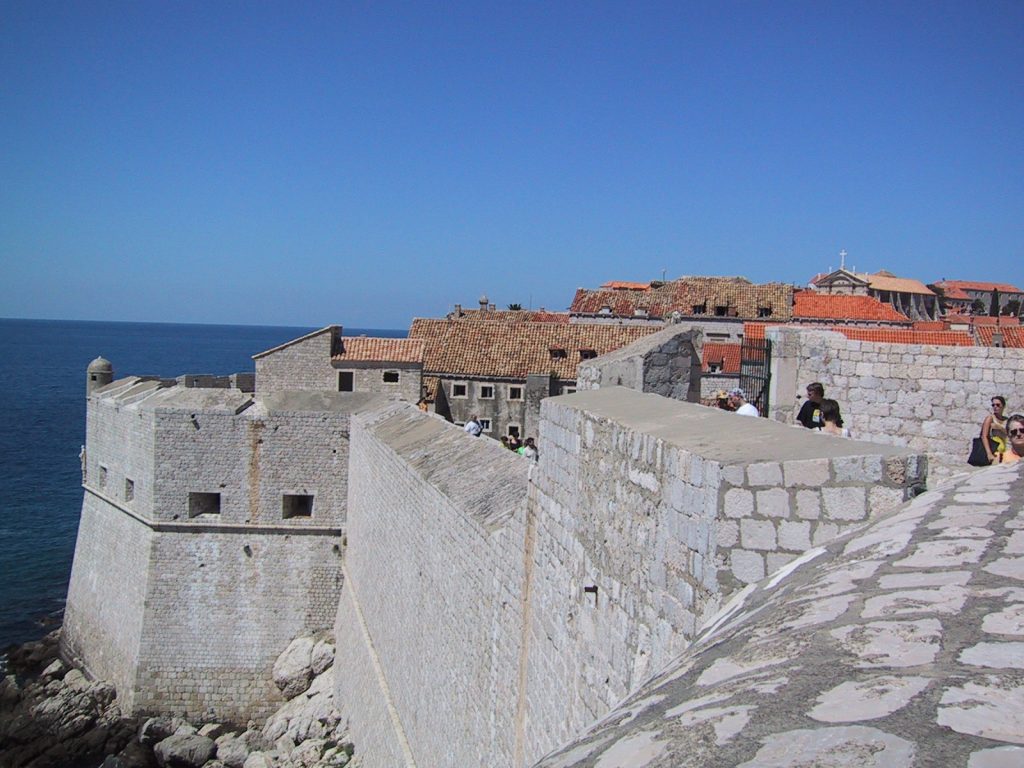 The city walls of Dubrovic. This image doesn’t do them justice. Built between the 13th and 16th century, they are over 2km long, 25m high, and enclose the entire old town. When Croatia declared their independence, the Yugoslavs shelled the old town in Dubrovnik and other historical towns, just to destroy their tourist trade. Is that childish or what? That is like ‘if I can’t have you, then no one can’. It is a crime to damage historical sites. They are irreplaceable. In W.W.II, the allies absolutely flattened one of the most beautiful old towns in Germany, Dresden, and were about to do the same to Rothenburg and other historical towns, simply to demoralise the Germans. Fortunately, a widely travelled US general heard what was going on and put an end to it.

On the way down the Dalmatian coast, I was stung by a wasp, right on the temple. One of the hassles of a motocross helmet is that they are a scoop for insects, but I persist with them because they are so cool. Anyhow, I don’t know if it was related, but about an hour after the wasp sting, I was so tired, I had to pull over. I was almost falling asleep on the bike. There happened to be an restaurant nearby. You are never too far from one anywhere in Croatia. I rested there for a while, and had a coke and a coffee. The caffeine sparked me up, and within 45 minutes, I was away again, and felt fine for the rest of the day. While there, I had a chat with the owner of the restaurant. He had worked in Australia for a few years in the 70’s, in a gold mine in Kalgoorlie, Western Australia. Most Australians will recognise the place as a hot, fly infested town, full of men, and very few women. It was and still is a famous gold producer, but maybe even more famous for being the first place (and maybe only?) to legalise prostitution in Australia. I also met a young Aussie in Dubrovnik, with Croatian heritage. Australia is one of the most culturally diverse countries, including a big Croatian population.

I had a bit of a laugh in Dubrovnik. It was hot, and I had my small Salomon backpack on, to carry my water and bits and pieces. The reason I bought this backpack was that it was designed to take a water bladder, similar to the camel-back designs. I was having a drink from the hose, when an American lady asked me if it was oxygen. I hope I don’t look that feeble!