Malawi was the first place I felt truly in Africa. It is a very poor country, yet beautiful. Services and facilities are poor, and the tourist industry is still in it’s infancy. It is a cheap country, though fuel is more expensive than the South, but not as bad as Zambia. The main attraction in Malawi is the lake. The lake makes up 20% of the area of Malawi, and is one of the most important fresh water ecosystems in the world. Scientists come each year to study here. Diving is popular and I did a dive in Nkhata bay.

Politically, the country was run by a dictator for 30 years until 1994. They now have a democracy with freedom of speech, but there is unrest. In spite of all the promises of improvements by the politicians, the people haven’t seen any of these promises come to fruition yet, except that the politicians democratically vote themselves pay rises, new cars and helicopters. It seems the poorer the country, the richer leaders.

The coffee bean was first discovered in Malawi, yet coffee is not the major crop, tobacco is. During the six month tobacco harvest season, they sell an incredible US$2 million dollars worth a day, supplying the bulk of the world market. Tobacco sells for about $1.50 a Kg, an average pack of cigarettes contains about 10grams of tobacco (before they add sodium nitrate to keep them burning, and other chemicals to ‘enhance’ them), which makes a raw material cost of 1.5 cents per pack. No wonder the tobacco industry is so wealthy. Another important export is fish, but not for eating. Aquarium fish are exported to all parts of the world. There are over 600 species in the lake, 350 of them unique, and more being discovered all the time.

Malawi was part of the British empire, and neighbouring Tanzania part of the German empire. The lake hosted the navy’s of both countries. One of the first actions of the first world war took place here. The German and English Captains were friends through all the diplomatic tensions before the war, but as soon as war was declared, the English were first to find out. The Captain knew where his friend would be anchored as they had earlier arranged a rendezvous. He promptly sailed up to his friends ship and fired upon it rendering it unserviceable. The crew were then informed they were at war, and taken prisoner. Not very sporting, but it did avoid bloodshed.

The slave trade here was rife for centuries, mainly operated by the Arabs in Zanzibar. At it’s peak, it is estimated that up to 100,000 were killed or sold into slavery. Most didn’t survive the journeys to the clients. The horrors of slavery led to this part of the world (Malawi, Zambia, Mozambique and Tanzania) being mobbed with missionaries, here to stop slavery and sell Christianity. To this day, missions are everywhere. Every village seems to have a mission. The most famous of all, the Scotsman David Livingstone spent a lot of time in the area exploring tributaries of the Zambezi and searching for the source of the Nile. He was too far south for that, but his reports of slavery and conditions led to the missionary invasion. As a result, the Scottish Presbyterian church are the most prevalent. The most famous and successful mission is Livingstonia in the north. This was the third attempt at establishing a mission in the country. Malaria had defeated both earlier attempts at Cape Maclear and Blantyre (named after Livingstones birth place). The cost of failure was high to the church. After 5 tough years the score was cost of 20,000 Pounds, 5 European deaths, and only 1 convert.

The first day turned into a frustrating one for me. After doing 1000km the previous day getting from Livingstone to the Malawi border, I was looking forward to an easy day. I had stayed the night in Chipita, just 125km from Lilongwe (the capital) where I headed to get cash. Although there are ATM’s, they don’t work with VISA or MASTERCARD. You can get cash from VISA inside the bank, but it takes 2 hours they say, but turned out to be closer to 3. Cape Maclear is only 125km from Lilongwe by GPS. It is too long a story to go into what actually went on, but misdirection by a local and a closed road led me to ride another 400km and end up exactly 110km from where I started. My easy day turned into 525km, 3 hours in a bank, a border crossing, and arriving after dark 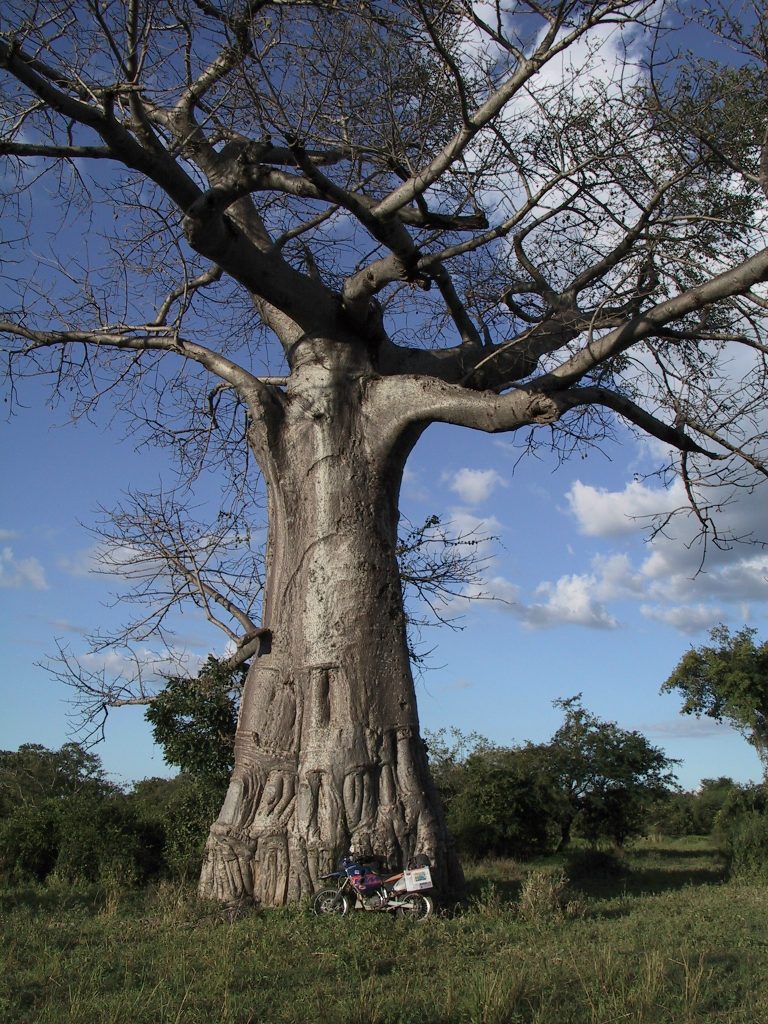 My first planned stop was Cape Maclear in the very south of the lake. It is one of the top spots on the travellers route, but I didn’t make it. A series of problems, capped by a washed out road ruled it out. This was the site of the first ill-fated mission. Malarial fever forced them to move.
Along the way, I came across this enormous Baobab tree which could be older than 3000 years. They are everywhere here and have been used by the locals as raw materials, and more recently they have been put to creative use for such things as being hollowed out to house an army officers flushing toilet, and in another case an ammunition store. 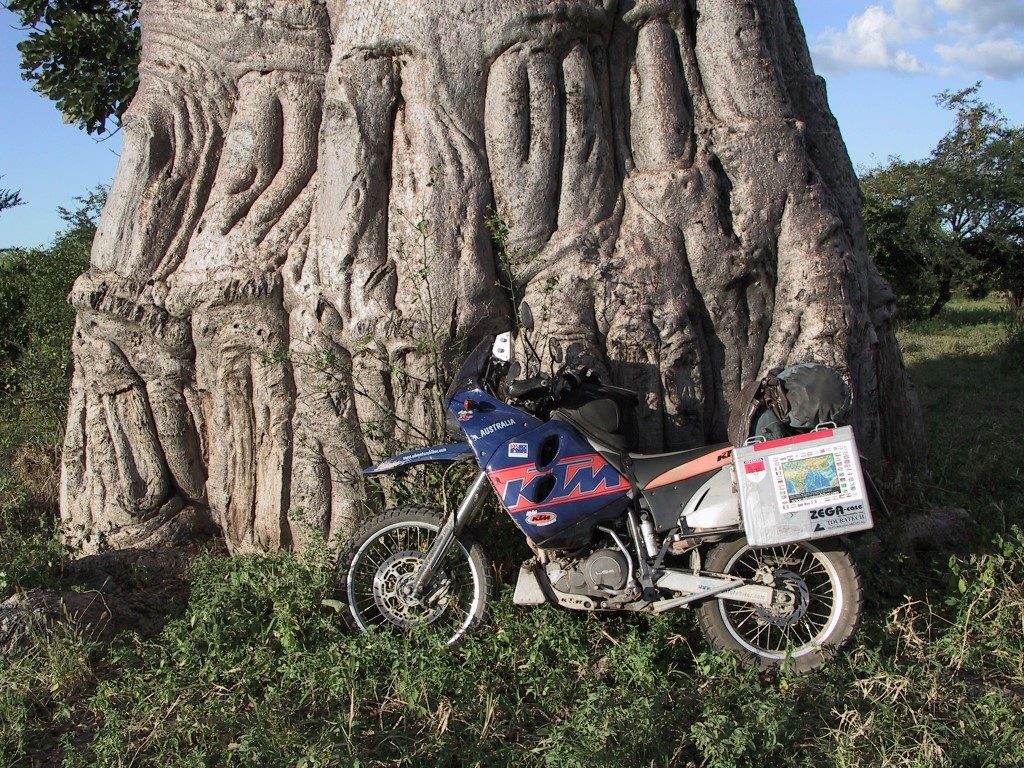 A closer view. The wood is very soft and stringy. They have specially adapted themselves to store water, yet there isn’t any shortage of water in most of Malawi. 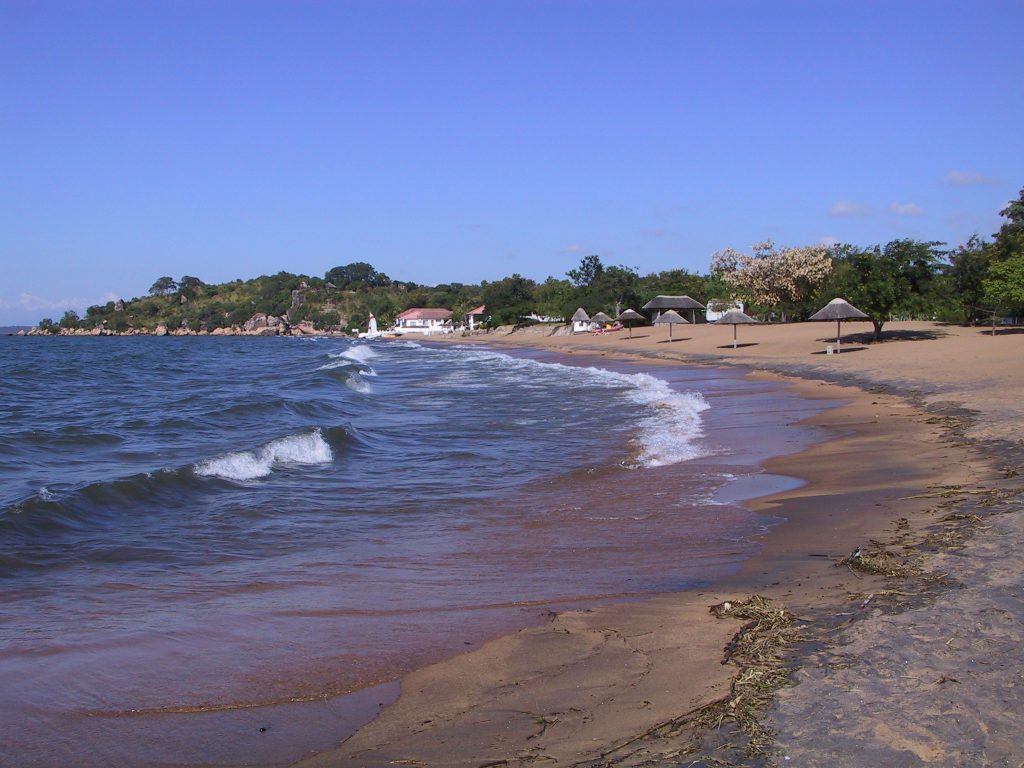 Senga beach, 135km from Lilongwe. This camp site is a part of the Livingstonia hotel complex now run by the French Merridian group. Until recently it was owned by a Dutchman. He was accused of bad treatment of his staff for some time. He was eventually deported, and the hotel appropriated by the government after a series of events. 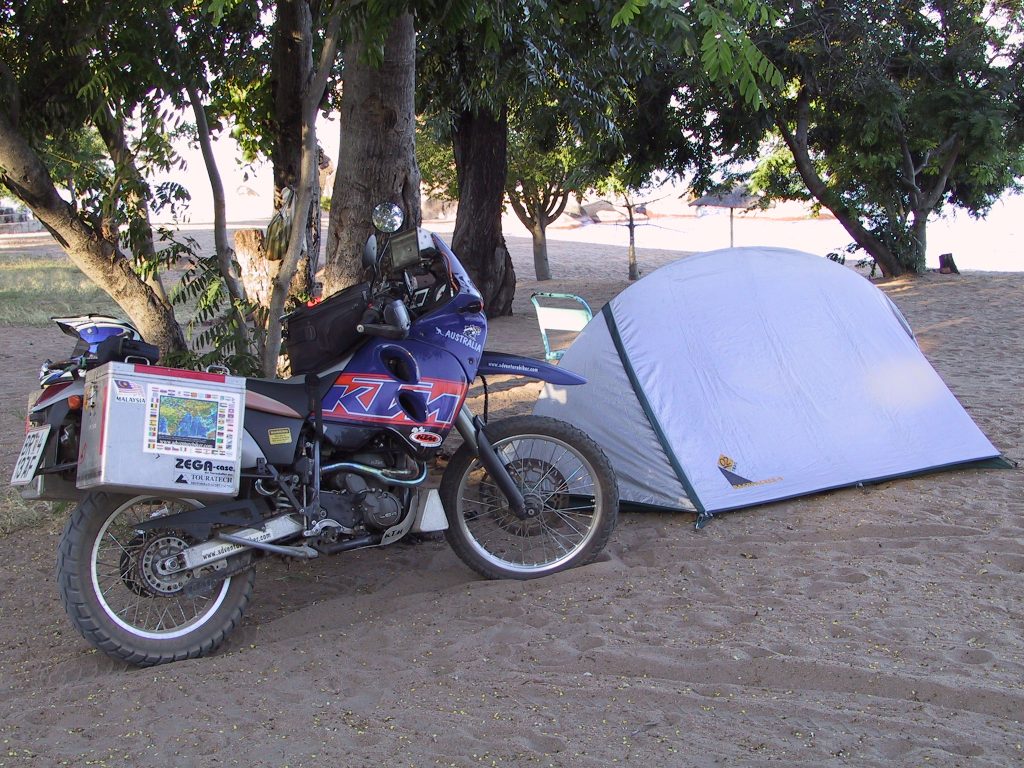 My camp on the beach. It was cool, the water clear, and close to a good cheap restaurant. I could have eaten in the hotel, but after being quoted US$18 for breakfast, I went to the Red Zebra restaurant 1km away and had the same thing for $2.50. 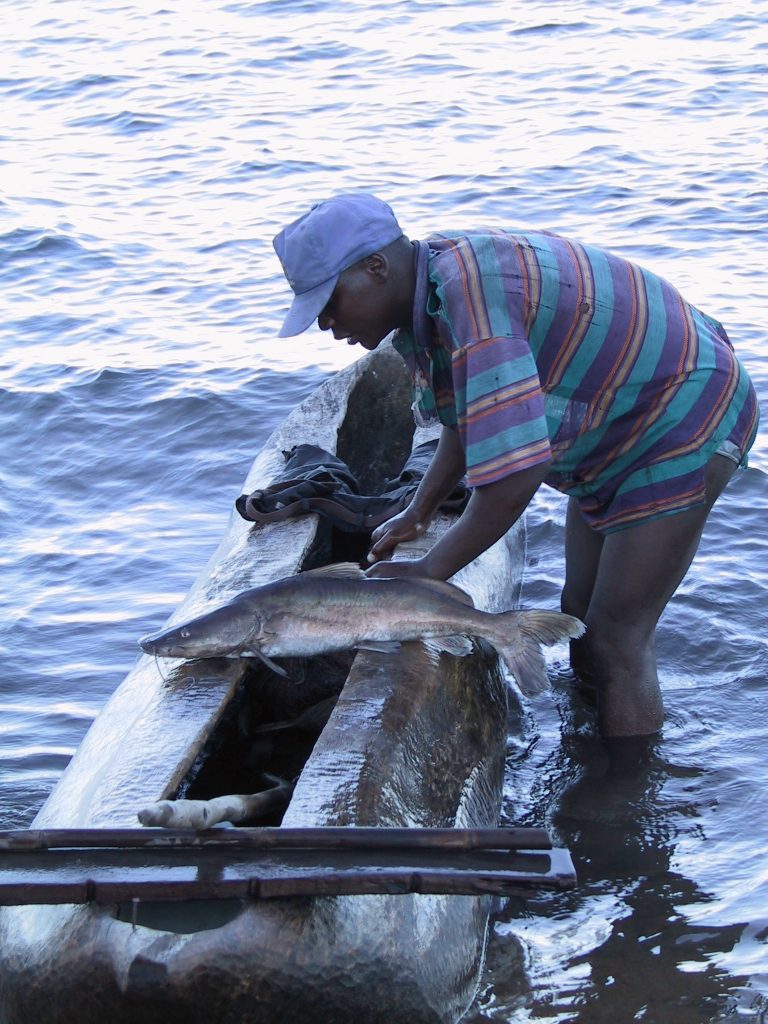 A local fisherman pulled in to sell his catch to the hotel. These are called Kampango, and are the favourite in Malawi. The dug-out canoe construction is interesting. 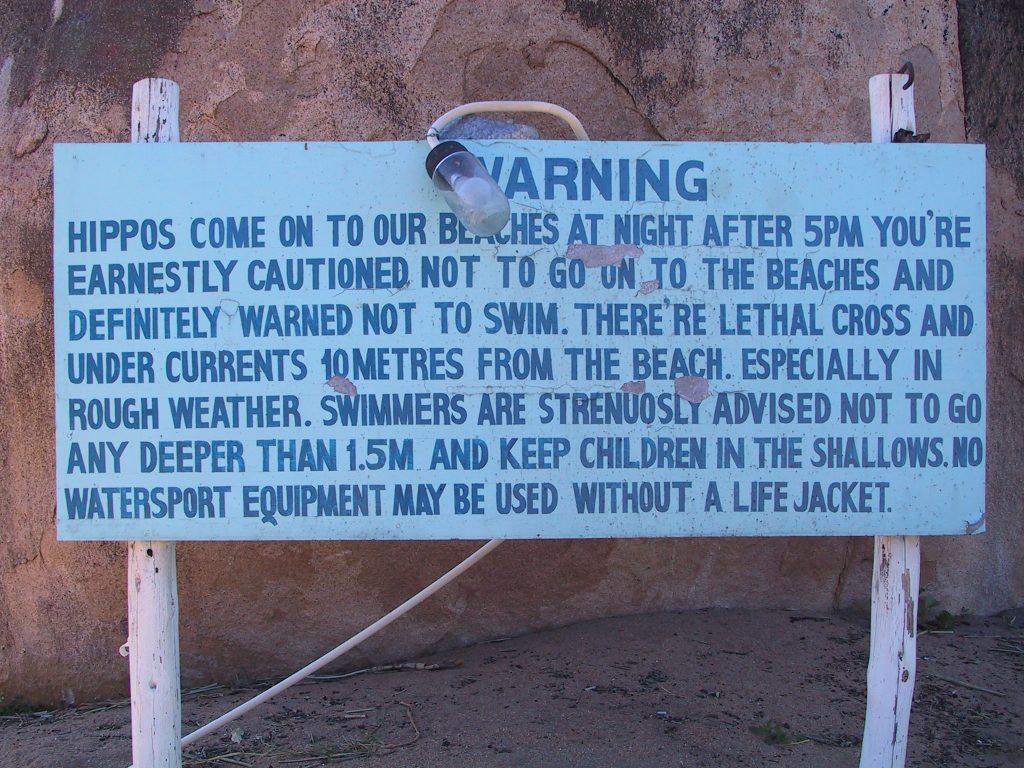 A reminder of the dangers in Lake Malawi. Hippos cause major damage to the local crops. When it gets too bad, rangers are called in to cull them. The carcases are slaughtered by the locals. They tell me Hippo steak is really nice, and the teeth are used for carving. Hippo’s are very territorial and dangerous to humans.

Carving and weaving is a large part of local economy. One guy tried to sell me a carving of gold. He pulled out a solid gold coloured block, and offered to carve any shape I wanted. Dubious, I looked at the block and told him it was brass. He told me he paid US$20 for it, to which I told him if it was real gold it would have cost US$1000. At $20, he was well and truly ripped off, but I am sure he knew what it was, and didn’t pay anything like $20. There must be some gullible tourists around. That reminds me of the story recently of an American tourist who purchased a carving in Zimbabwe. On asking the price, he was told $1000. He promptly paid US$1000. The price was actually $1000 Zim dollars, or US$9 at the time. The carver made a years wages in one sale. In Indonesia, we often saw package tourists with no idea of local prices paying 10 times the street price for goods and services. The locals have an eye for who the suckers are. Maybe I look like a sucker. I was offered mandarins for US$1 each the other day. 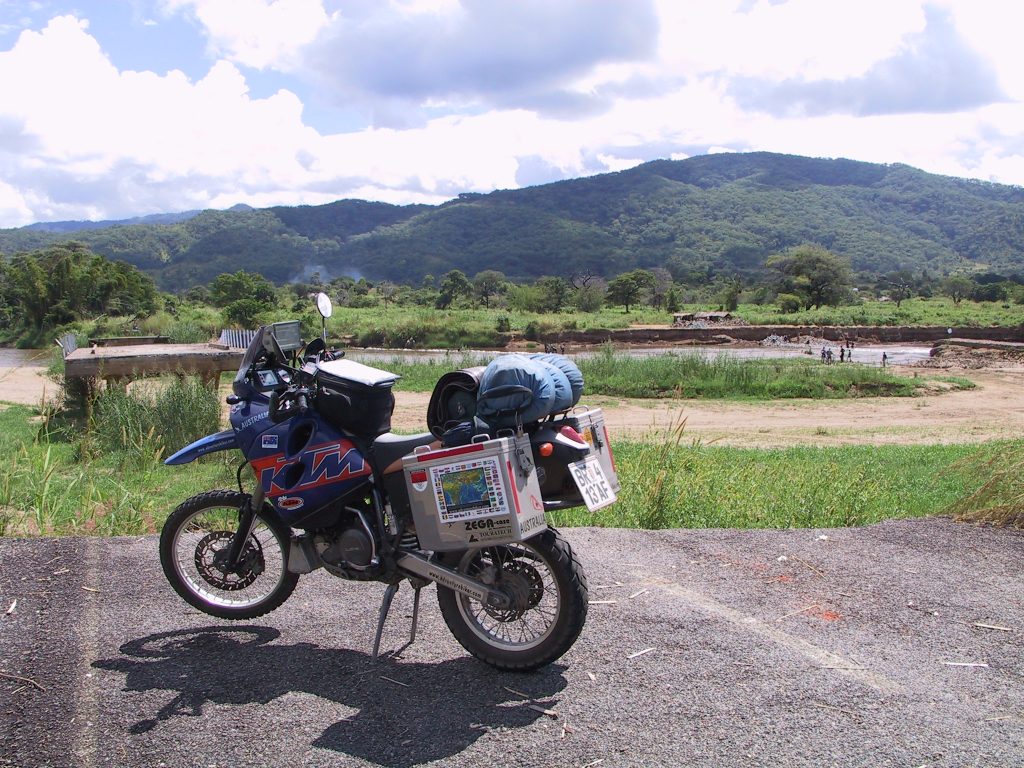 Another good reason not to trust road information from locals (but then who else can you ask). This bridge on the coast road heading north has been washed for years. I knew this, but was assured that bikes and cars could cross the river. Maybe you could if you have a 1 metre ground clearance. The water was chest deep, and running fast, not to mention a 1 metre drop off getting to the river banks. 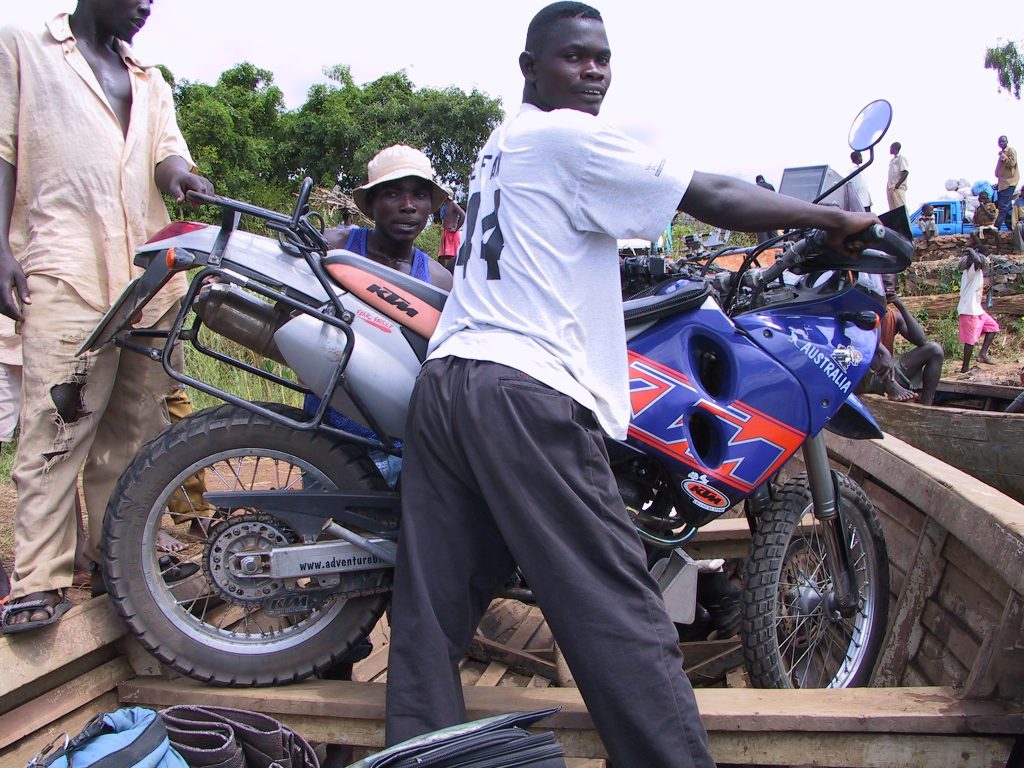 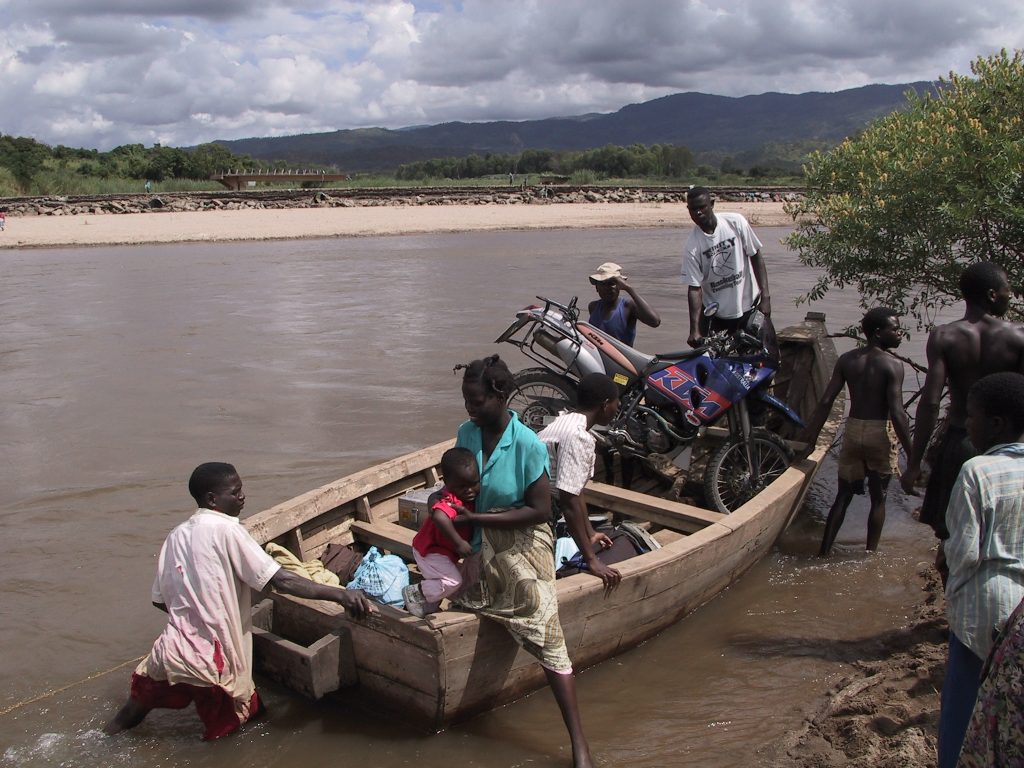 They were really good and careful with the bike. It was a lot easier than I expected, and the locals very friendly. 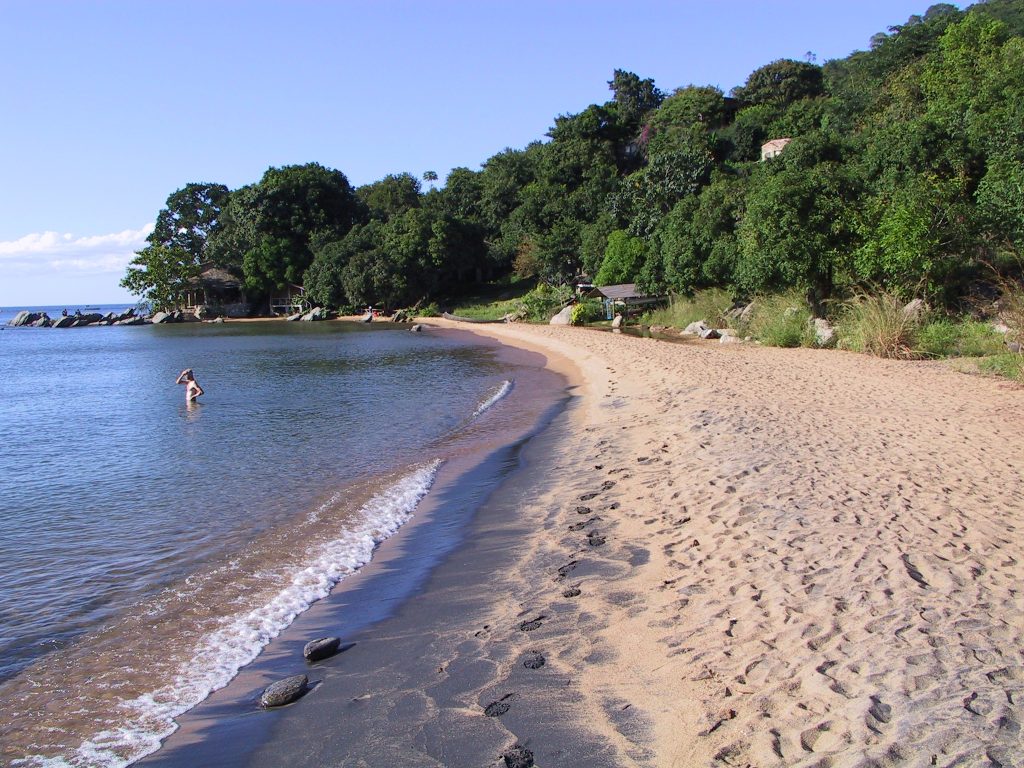 My destination this day was Nkhata bay, an idyllic spot with good tourist facilities including a dive school. Ferries run up and down the lake from here, and is a good staging point to get to the popular Likoma and Chizumulu islands (which belong to Malawi, yet are in Mozambique waters).

The dive school (Aqua Africa) here is the cheapest I have seen anywhere in the world. A PADI open water certificate is only US$150, and a 45 minute dive US$15. All the equipment is quite new, and owned and run by an Englishman by the name of Steven. I did a dive, and apart from Steven, I was the only one. This is still too close to the end of the wet season, and few tourists are here yet. Visibility was good, and the fish interesting, but no coral being fresh water. Most of the fish were the tropical aquarium type, colourful and not as interesting as ocean fish, but I did see an interesting example of life for the mouth breeding fish. The female lays her eggs then puts them in here mouth where they are fertilised. They hatch in there, and she will keep them until they are big enough to fend for themselves. She spits them out so they can feed, but as soon as danger looms, she gathers them up again into her mouth. We saw one predator repeatedly come in and attack the fingerlings. Mum would chase it off, then suck the young up again until she felt it was safe again. This attack and hide procedure went on for maybe 10 cycles before we moved on. 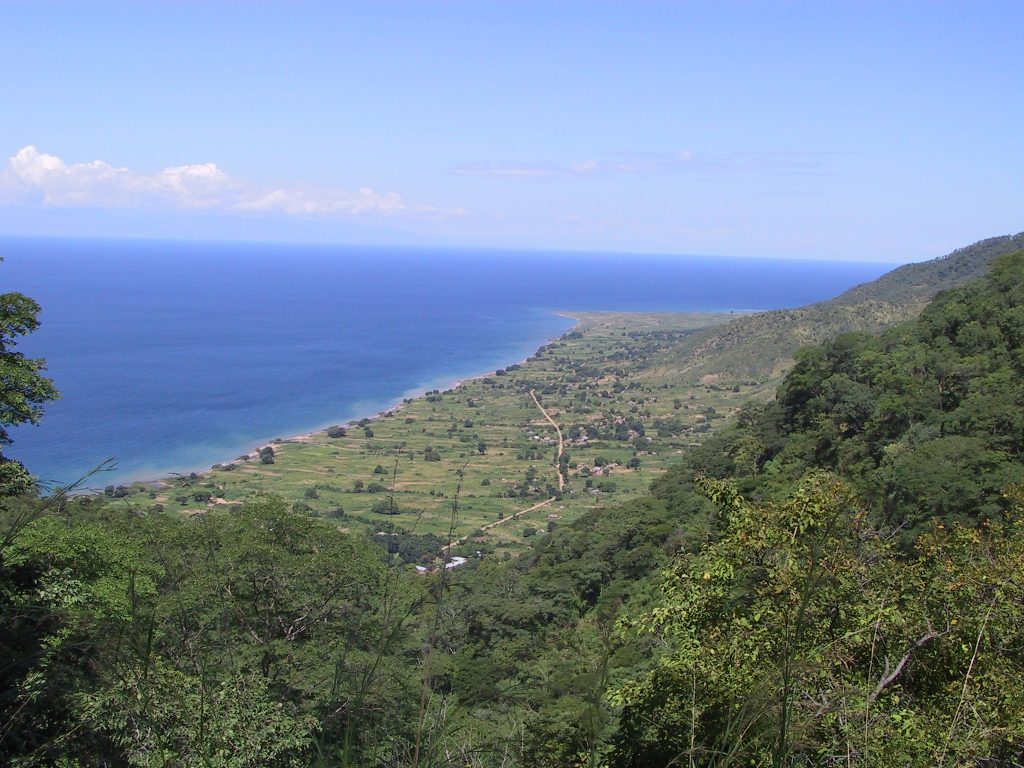 The view from the road to Livingstonia in the north. The dirt road up is a bit of an experience. Numbered switchbacks, but rain erosion grooves and rocks make it a bit of a challenge. They had a bulldozer up there at the time, patching it up, but it actually made it harder because it loosened up the soil and rocks. It was like riding in sand filled with rocks, all trying to send you anywhere but your intended path. 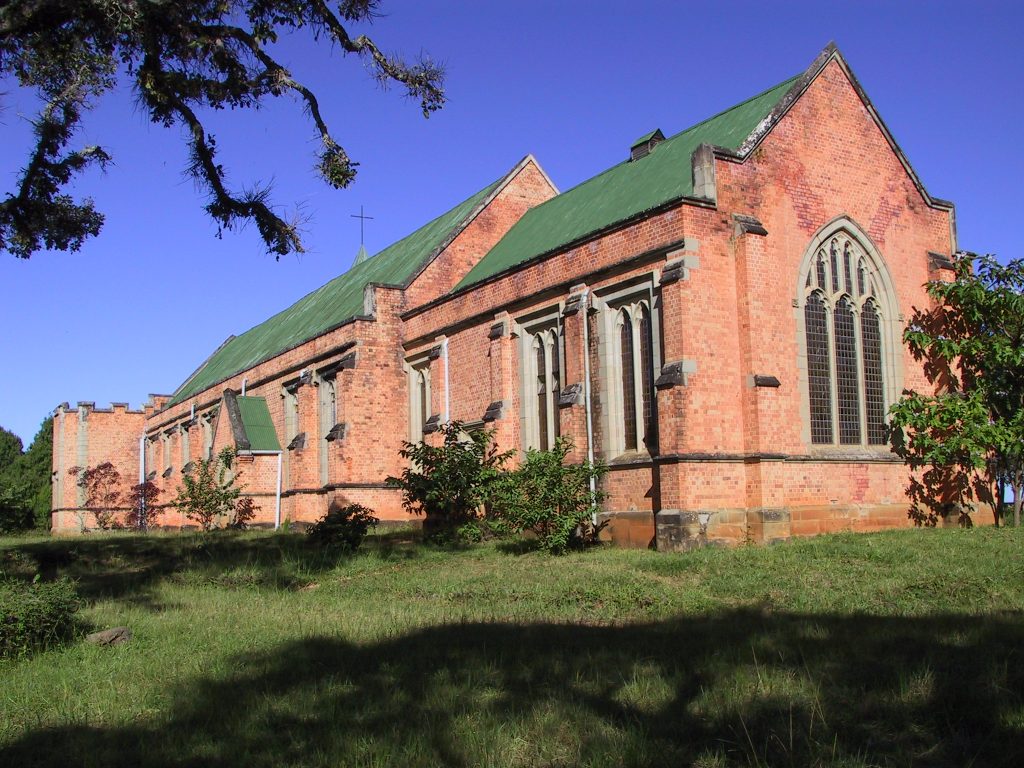 The church in Livingstonia. A huge grand affair, but I doubt there were ever enough people to fill it. It has a huge stained glass window depicting David Livingstone and his two black companions Juma and Guze. 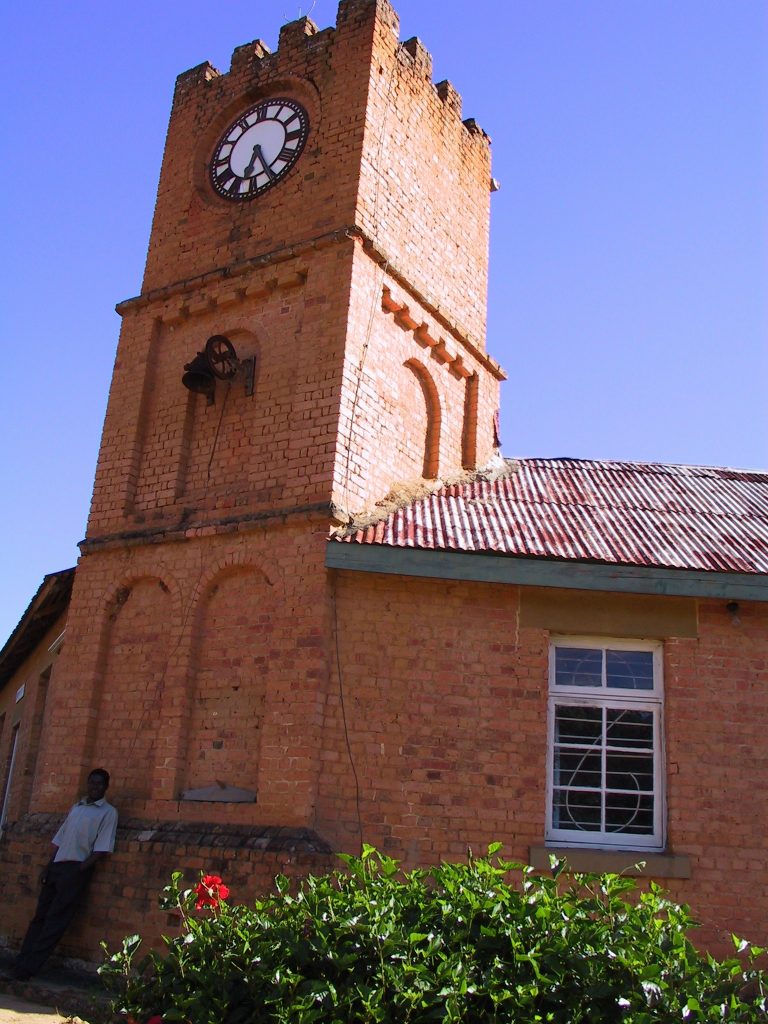 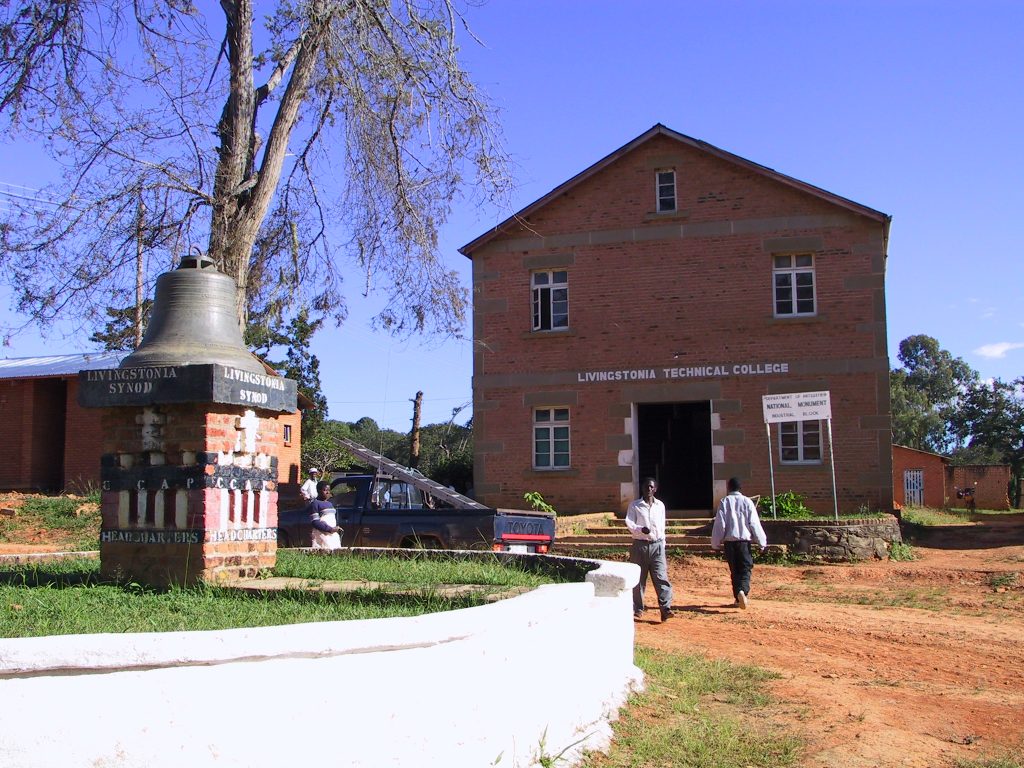 The technical college and huge bell dedicated to the Laws family. Dr Laws was the missionary who established the mission. He obviously had a big image of the place. The current population doesn’t seem to justify the construction they did. 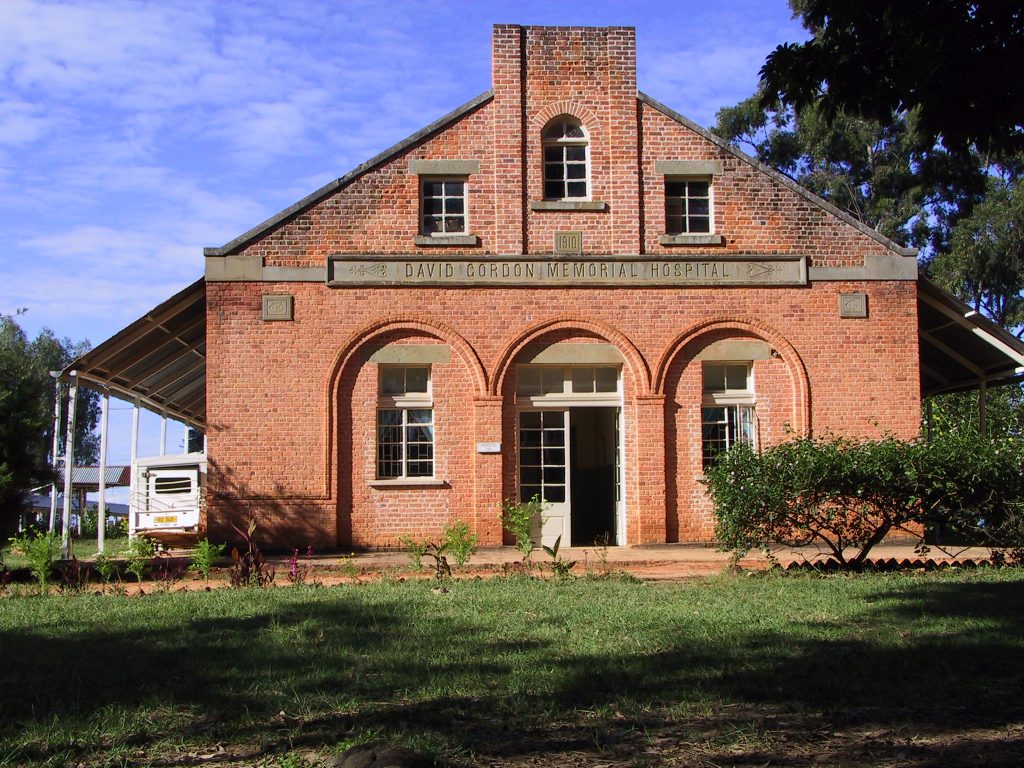 The hospital is still in use, as are most of the other buildings. This was once the biggest hospital in Southern Africa. Dr Laws was a doctor of medicine.
I decided not to stay the night here, and press on closer to the Tanzanian border.