Exchange Rate: 1USD = 5.4 Pula
Fuel: 1 Litre = P2.2 (93 octane)
Camping: US$1 to $5
Backpackers: – None, they only want affluent tourists. Hotels US$80 and above.
Road conditions: – Generally very good. All main roads are sealed, but off road is mostly soft sand.
Speed limits: – Mostly 120kph on the highways.
Border crossings: Several to South Africa, Namibia, Zambia and Zimbabwe. No Visas required for most nationalities, and no carnet required as South Africa, Namibia and Botswana share customs, IE you only enter the bike at the first country, and exit at the last, in my case Botswana.
Food & Drink: – 1L Water P2.00, 330ml Beer P4.50, 330ml Pepsi P2.20, Main Meal (chicken and salad) P20.00

I only passed through the top part of Botswana, to see the Okavango Delta. The Okavango river doesn’t exit at the sea like most rivers, it all runs into a pan, and has become a major wildlife park. I was here in the dry season, which means the birds aren’t here yet, but there are plenty of Giraffe, Elephants, Hippos, Zebras, Gazelles etc. I tried for hours to get a day trip into the delta, but only one was operating, and I had to book one day in advance for it. I was ready to go, they only had two clients, but apparently it was too much trouble to go back to the park office to get another permit. A bit slack I thought, but as it turned out, the couple who did go said it wasn’t particularly interesting anyhow. I did flight instead, and really enjoyed it.

The plane was a Cessna 206 I think. There were 2 English guys, an Italian and myself. The pilot asked us if we minded flying low, to which we all said no, but when he started flying below 50 feet at 120 knots, then banking sharply so that the wing tips seemed to be brushing the grass, I noticed the guy next to me had eyes the size of golf balls. This was obviously standard procedure for the pilot. He had the throttle set at 2500rpm (close to full power) for the whole trip, and seemed to enjoy exerting maximum G’s on us, diving, climbing and banking. I was comfortable with what he was doing because I have spent a fair amount of time in small planes, including at the controls, but some of the others breathed a sigh of relief when we landed. 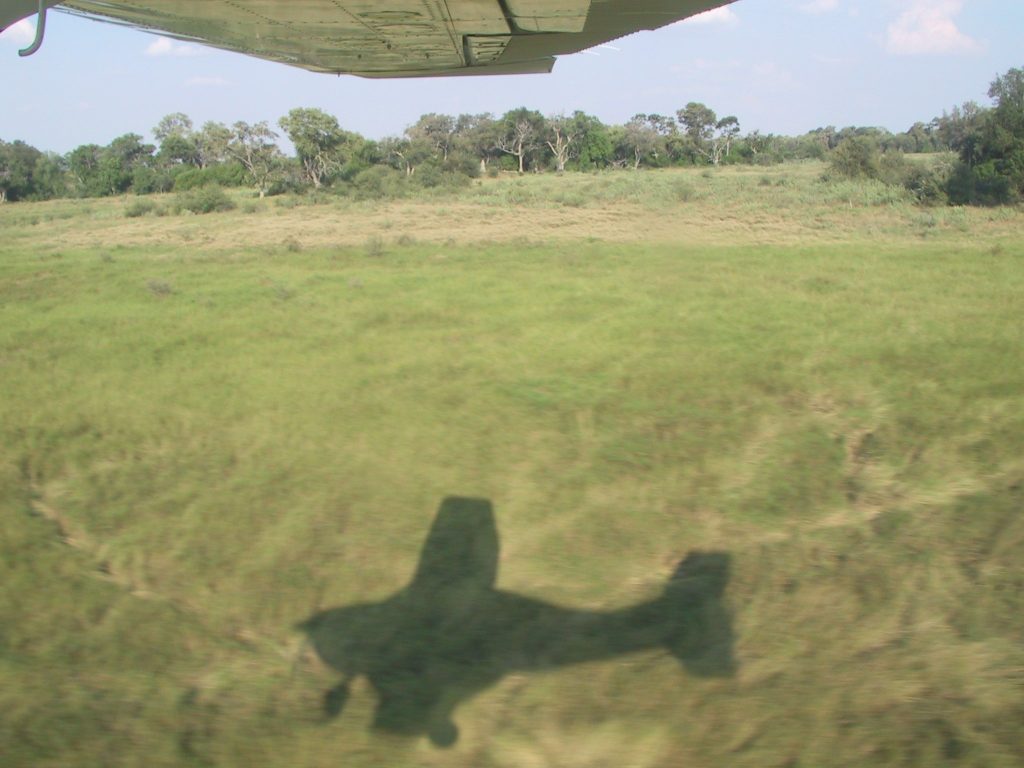 Typical grassy flats of the Okavango Delta. I had closer shots with the wing skimming the grass, but the camera wasn’t fast enough to get a crisp image. These are the only shots worth publishing. 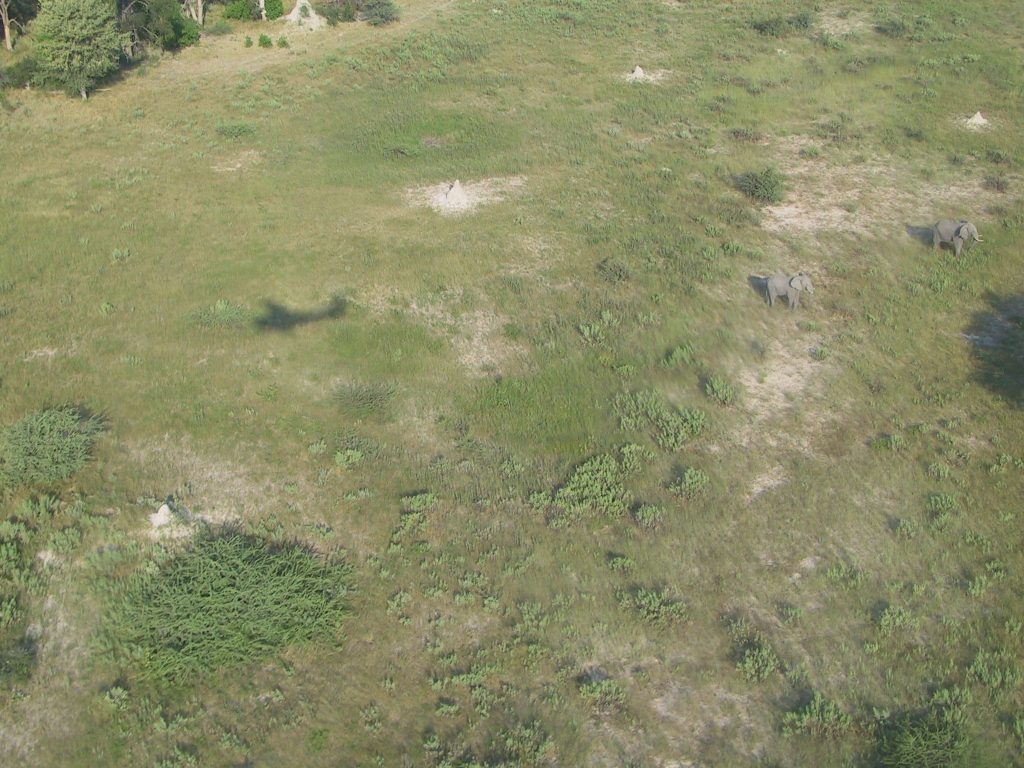 Leaving Maun, I had to decide one of three ways to move on. I could go up to the Caprivi strip (a narrow corridor belonging to Namibia that runs right across the top of Botswana and borders Angola, Zambia, Botswana and Zimbabwe), or go East to Zimbabwe, or straight to Zambia. There is some trouble in the Caprivi, and convoys are now mandatory, so I ruled that option out. Zimbabwe didn’t have any fuel, thanks to crazy Bob, so I ruled that option out too. Robert Mugabe, the Zimbabwe president is in the process of throwing out all the white settlers, and actually inciting the blacks to use violence to get farmers off their land. Murders are common, and endorsed by the government. All aid has been withdrawn by supporting countries, and their economy is in tail spin. Nobody will touch Zimbabwe dollars outside the country, because they know tomorrow they will be worth less. Tourism has almost ground to a halt, and exports are suffering. As a result, they have no foreign currency to buy basics such as fuel. Surely he will get voted out soon, but he does appear to have the support of the black majority. If only they realised the damage he is doing. In one stupid move, he has put Zimbabwe’s development back 20 years. South Africa and many other eastern European countries have learned how to co-exist with the whites, and in fact couldn’t survive without them, so why can’t Zimbabwe? In many cases, the land was unfairly appropriated from the blacks to the whites many generations ago, but since the whites put so much money and sweat into developing them into commercial concerns, surely they are entitled to some compensation. Naturally, none of the whites want to just walk away from a lifetime of blood, sweat and tears. Nor do they want to leave what has been their nationality for generations. Edit: As of mid 2017, nothing has changed. 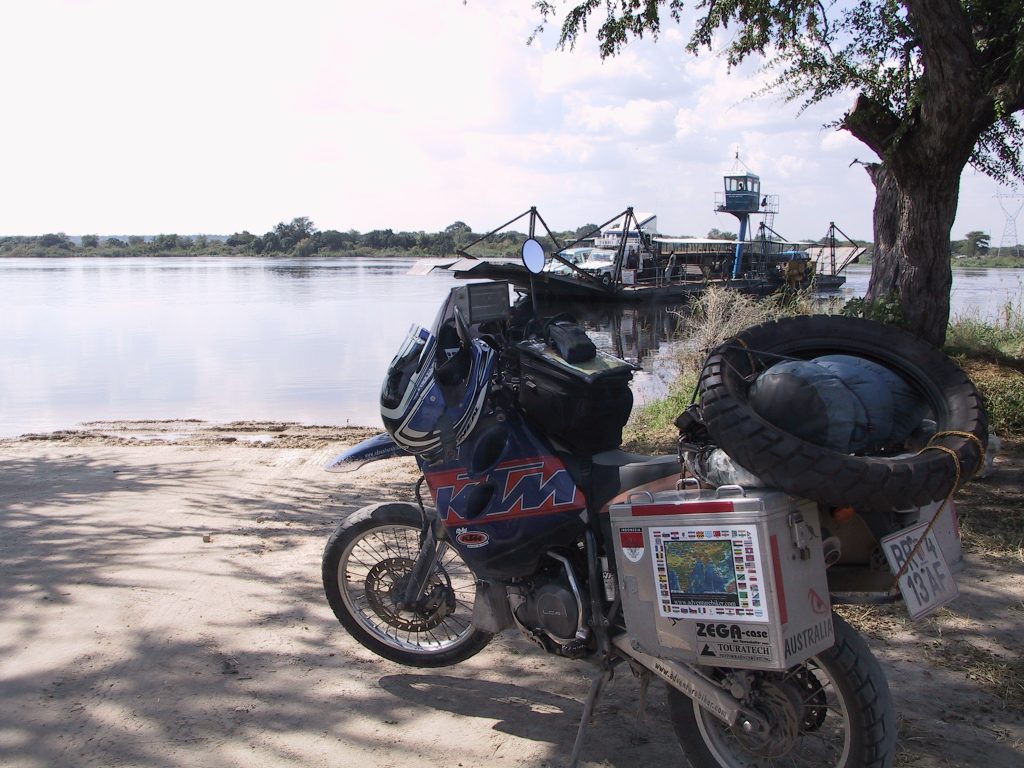 Since I decided not to go to Zimbabwe I had to cross the Zambezi river by Ferry to enter Zambia. I am glad I had a bike here, because the ferry only takes a few cars at a time. There was a huge line up of trucks and cars that would take hours to clear. I only waited about 10 minutes for the next ferry. The cost is 25 Pula or just under $5