EDIT August 2017: This is obviously way out of date. I left it in for amusement. It is always fun to look back on the technology we used to use. Especially the acoustic modem.

This is the equipment I took with me.

MSR Whisterlite Internationale 600 stove. Runs on unleaded fuel, which means you don’t have the added weight of fuel cans to carry, just siphon some from the tank.. I plan use the fuel bottle as a safety reserve when needed. Weighs only 400g. WhisperLite Internationale 600 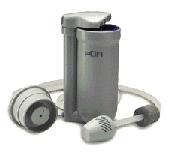 Pur VoyagerDepending on which countries you go to, a water filter or purifier may be necessary. I took a PUR Voyager, which is the highest level purifier. It eliminates viruses, bacteria, and parasites such as giardia and cryptosporidium. A similar looking but cheaper filter model called the hiker is available, but it doesn’t filter out viruses. Small and light. http://www.purwater.com/

GPS holder for the Garmin GPSIII+. Rubber mounted, easy to insert and remove the GPS, and includes the power cable to run it from the battery. These are by far the best on the market, and they have units for several different makes and models. www.touratech.de 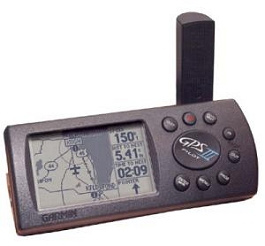 The garmin GPSIII+. These are a brilliant little chart GPS. I found it invaluable for finding my way around. Shown mounded in the above GPS holder .www.touratech.de or anywhere that sell GPS’s. 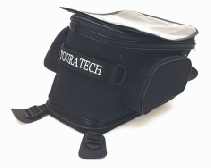 This is similar to the tank bag I have. Made by the same company, but this one is more suited to enduro bikes, and has a better map holder. www.touratech.de

I’m certainly not suggesting that anyone else should do this, but being in the computer industry, it was almost a natural choice for me to take a computer. In fact for me, since I committed to doing this web site live, it was mandatory. Certainly, most people would not even consider taking computer equipment with them, but there are undeniable benefits:

1. Almost mandatory for a digital camera to store photos on.
2. Dozens of electronic books stored on hard disk.
3. Access to my 120 music CD albums.
4. Do all my emails off-line rather than have to use on-line email systems such as Hotmail and Ekno, which requires locating an internet cafe. More than half of my route won’t have any internet access at all. All I will need is a public phone.
5. Maintain this web site from almost anywhere in the world.
6 All my contact information, and some tourist information.

All these benefits in a package that , yet weighs about the same as one travel book.

Toshiba Libretto 110CT. 1Kg, Slightly larger than a video cassette. Smallest complete Windows 98 system available. No longer made, but second hand units are always available. Try www.ebay.com I also have a HP portable CD writer/rewriter. The main reason for this is to be able to save my digital photos on a CD, and post them home. One of my biggest worries is having all my photos stolen or lost somehow. I have my equipment insured, but I can’t replace the photos. The other reason is that I have my entire music collection with me, in WMA format (similar to MP3). I have about 120 albums on 6 CD’s.

Teleadapt acoustic coupler. With this device, I can connect to the internet by straping it onto almost any telephone handset. This was a mandatory choice for me, since I need to communicate regularly whilst on this trip. Trying to plug in a modem in so many foreign countries is almost impossible. Besides, I doubt that many, if any of the places I stay in will even have a phone point. I should be able to use any public phone, without having to bother with connections. I have consistently had connect speeds of 26400bps, which is reasonable. More info at www.teleadapt.com 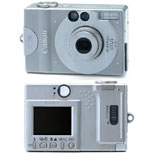 This is the new canon IXUS digital camera (called a Powershot 100 in the US). The smallest available, and at 2.1M pixels, quite good resolution. I picked this up in Tokyo, and had only been released days before. I had intended to buy the new Olympus 3030, which is, I think, the best affordable digital camera available. I had the Olympus 2000, and I loved it. It was better than any Canon, Fuji, Epson, HP etc have on the market, but there is one feature about this new Canon that blows all the rest away. Size! Smaller than a pack of cigarettes. I can’t over-emphasise the value of a compact camera when travelling. If you are a photography buff, you may not want to do without the flexibility an SLR offers, but for the average photographer, I believe this is the way to go. Slip it into your pocket, and be ready for those spur-of -the-moment shots as they happen. Same size as the Canon ELPH conventional camera range. www.canon.com

This camera was a bit of a disappointment really. Night time shots are a waste of time, with or without the flash. My Olympus C2000 is a much better camera, but it is a lot more bulky. I ended up having the Canon stolen in eastern Turkey, and had my Olympus C2000 sent over. before going Africa, I bought a Canon Powershot G1. It should have been a better camera than the Olympus as it had better specs, but the pictures just weren’t as good.

This is a switch-mode DC-DC adapter, which will power my laptop computer from the motorcycle battery. Being switch-mode it is about 85% efficient, which means less battery drain. http://www.targus.com