Greece of course is now a part of the EU, though maybe not for much longer.

Costs are rising dramatically in Greece. While it is still cheaper than western Europe, it is rapidly catching up. Greece is now part of the EC, and maybe that is a factor. Accommodation prices are about 70% higher than quoted in my Lonely Planet book that was published in 1999. Camping in Greece is more expensive than in Austria or any other country I have been to on this trip, and inferior in services. On Santorini Island, they charged me 1200GRD or US$3.50 for a beer in what was a pretty ordinary bar (EDIT August 2017: That was expensive at the time).

I had been looking forward to getting to Greece. I have been here before, in 1995 but only Athens, and three close islands. I had come in on a ferry from Italy to Patras, and then on a bus to Athens. I remember just how dry and desolate Greece looked to me then, so it was a bit of a surprise coming down from the north to find that it is very green and heavily cultivated. They grow grain, fruit, vegetables etc. I had left Macedonia late, so I only got as far as Edessa, and had to stay the night there. I couldn’t find a camping ground anywhere, so I pulled into a petrol station to ask if there was any around. There were two men there, and neither spoke any English, but by hand signs, they got the message, and there were none. They invited (almost insisted) I join them for supper. I accepted, and enjoyed a simple meal of bread and tomatoes, and a few shots of ouzo. Even though we couldn’t communicate effectively, we had an interesting and enjoyable time. Their hospitality was a good introduction to Greece. I had to back-track a little to Edessa to get a hotel, and I found a ‘cheap’ one, what they call a C class hotel. It was very basic, but cost 7000GRD, which I thought was overpriced. It had air-conditioning, but it costs extra if you want to turn it on!

Next day, I moved on to Litochoro, at the base of Mt Olympus. Mt Olympus is the birth place and the home of the 12 mythical Greek gods. Zeus presides over the other gods on Mytikas, the highest peak at 2917m (9650ft). I figured my boots should be close to broken it, so it was time to check them out. Some time ago, I spent a night at Mammoth Lakes California, which I think is about the 10,000ft level. I had some breathing problems from the thin air, but we had driven straight up from sea level. I was interested to see if I was going to have any problems here on Olympus. There is a refuge at the 2070m mark, so I hiked up there, and stayed the night. I made reasonable time, coming in under the average, but the last hour or so was really hard going. It wasn’t any steeper, I just couldn’t make good time. Next morning, I set off for Mitikas at 7am. This was a little harder, and in places quite dangerous, but I had no problems with my breathing which was a relief, considering I’ll be spending some time in the Himalayas. I would say only a third of the people who set off for Mytikas actually get there. There is another peak called Skolio on the way to Mytikas. It is only a few metres lower, but it is very easy to get to, and a lot of people stay here when they see what they have to do to get to Mytikas.You have to descend maybe a 100m altitude, then climb up very craggy rocks, and for me at least, an element of fear added a few ticks to my already racing heart-rate.

This climb is actually part of the European E4 track that starts in the Pyrenees’s mountains of Spain, and traverses right across Europe. An amazing feat to build such a long track. There are four refuges on the mountain. I couldn’t see any of the others. 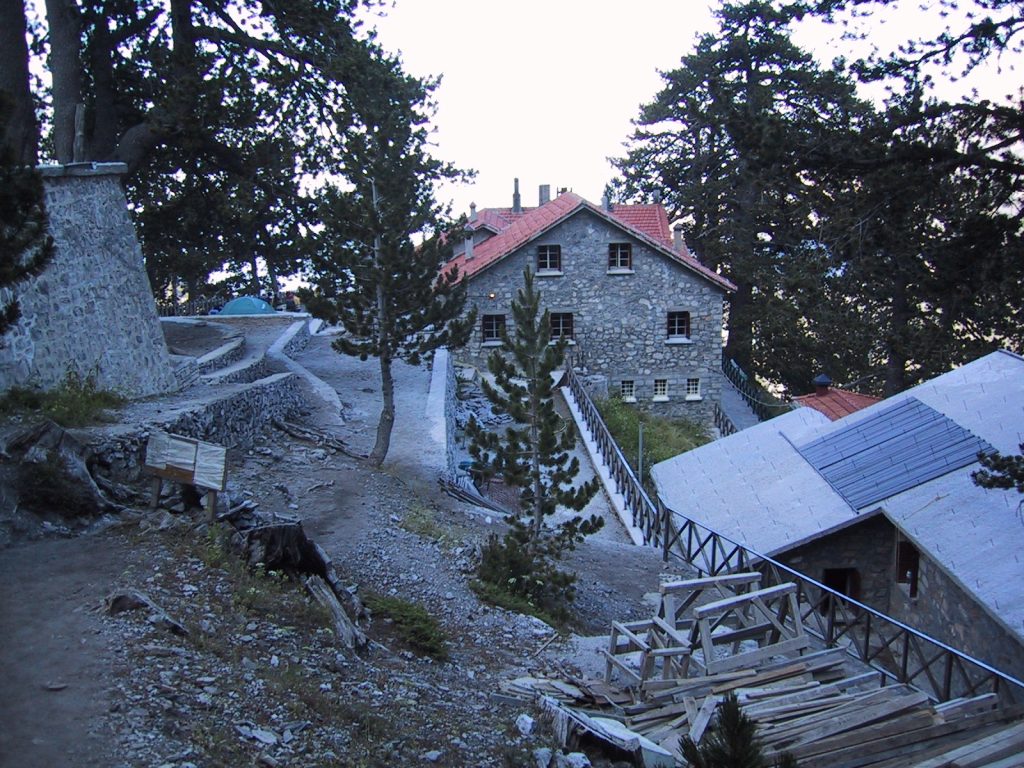 This is the refuge Spelios. It sleeps 80 people, and serves hot meals and cold beer every day of the year. What is amazing is that everything in the building except the rocks where brought up by mules. There are no roads. I expected a bit of a rough building, but is is very well built and comfortable. It is also cheap at only 2500GRD for a night, less if you are a member of a hiking club. 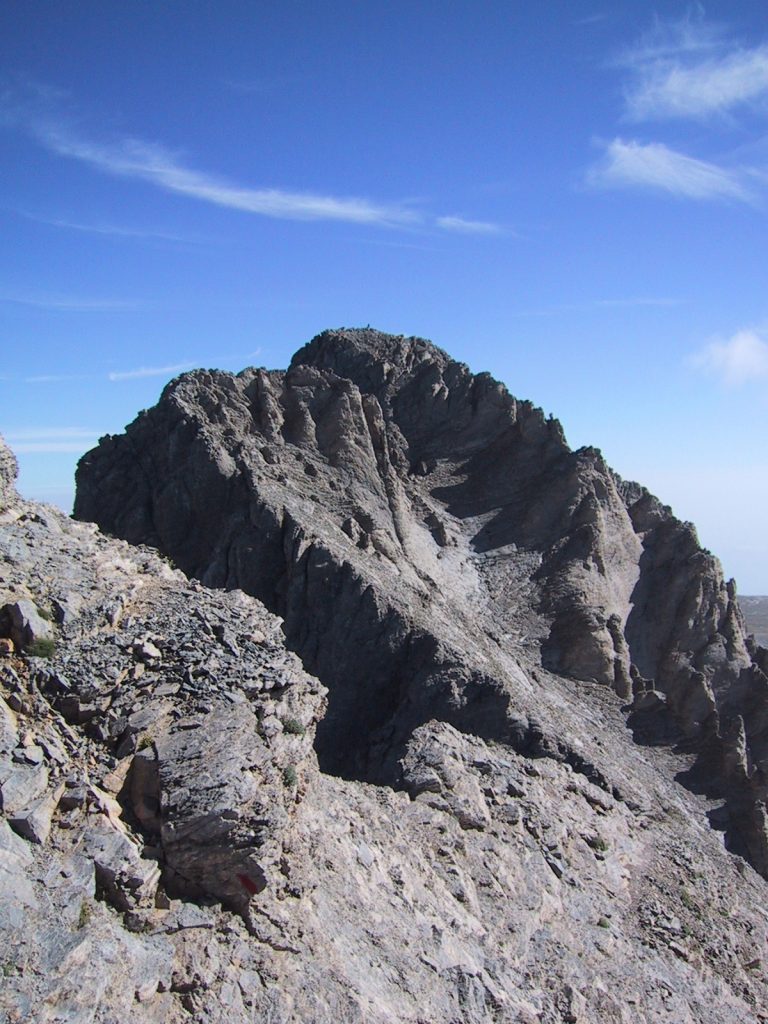 The destination. It is hard to put a scale to things, but there is someone standing on top of the peak, and he looks like a dot. 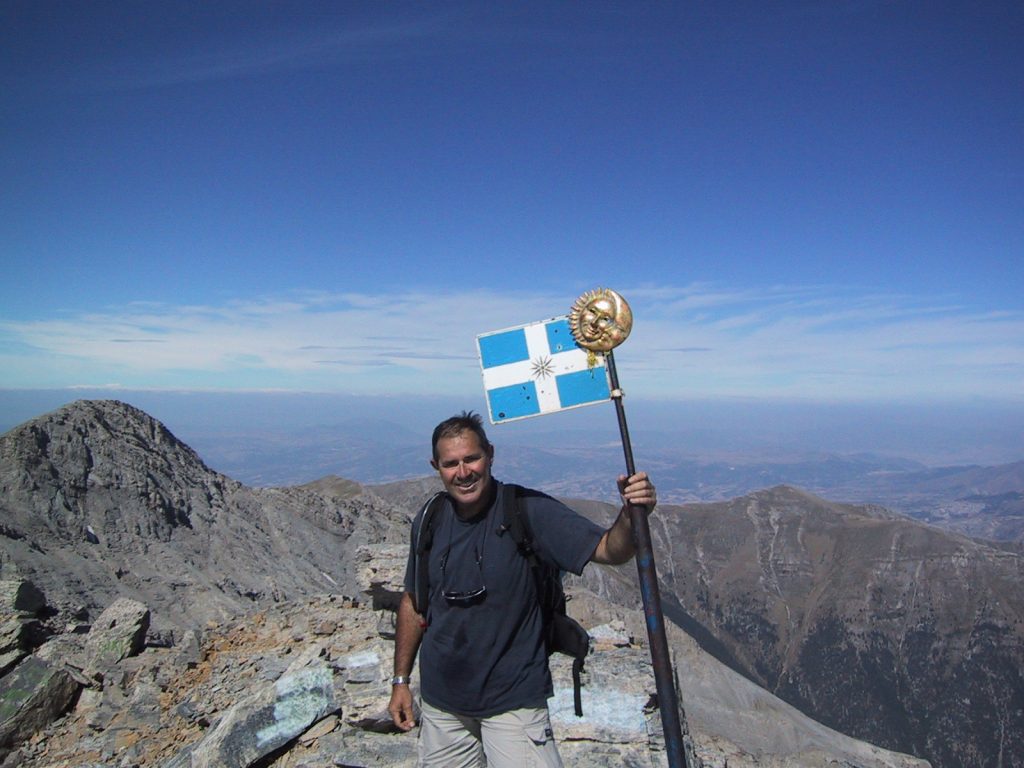 I made it! Coming down was harder than going up. I am not an experienced hiker, and carrying a kilo or ten too many. My knees were really causing me pain, but I finally made it. It took almost as long to get down as go up. 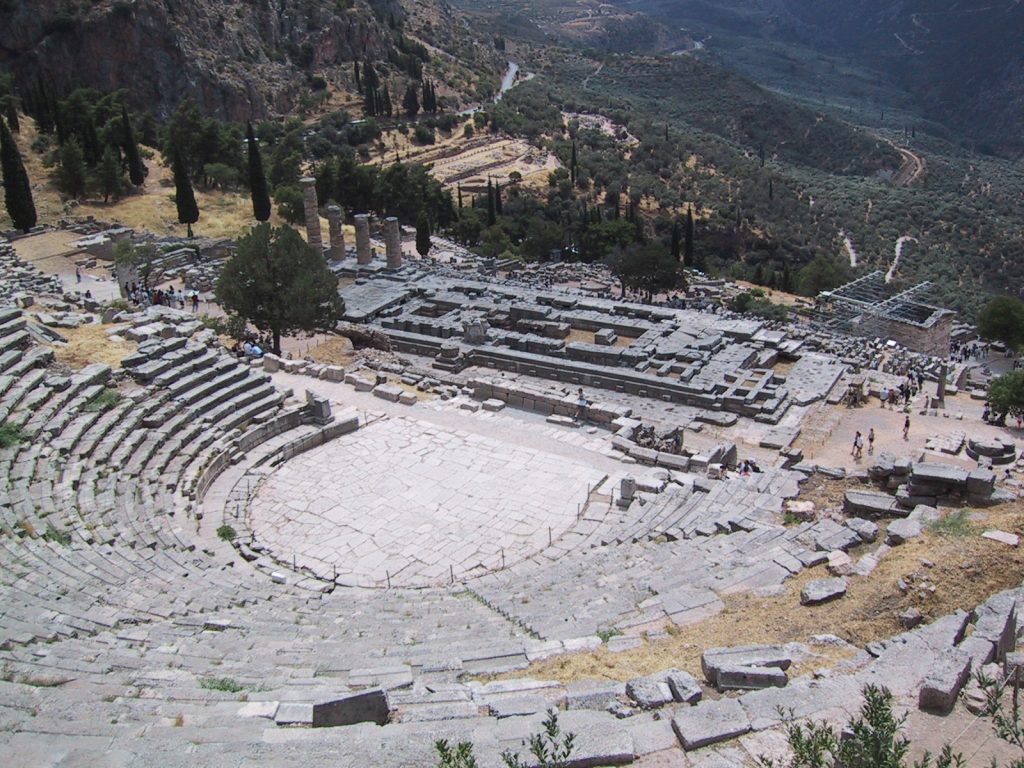 On the way down to Athens, I rode across to the Gulf of Corinth to have a look at Delphi, one of Greece’s most outstanding ancient sites. I accidentally left the keys in the ignition while I looking around the ruins. Later in Crete, I met Josef Seitz who often writes for Motorradd (Europe’s biggest motorcycle magazine). He told me he had his Honda Africa Twin stolen there a few years ago. I now have an anagram to help me remember to lock everything. BITCCH (tank Bag, Ignition, Top box, Camera, Coat, Helmet)

On to Athens, and Piraeus the port. I had been to Athens before, and I expected chaos on the roads, but it was a Sunday, and was relatively quite. I tried to get accommodation for the night, but all the budget rooms were sold out, so I jumped straight on a ferry for Santorini. 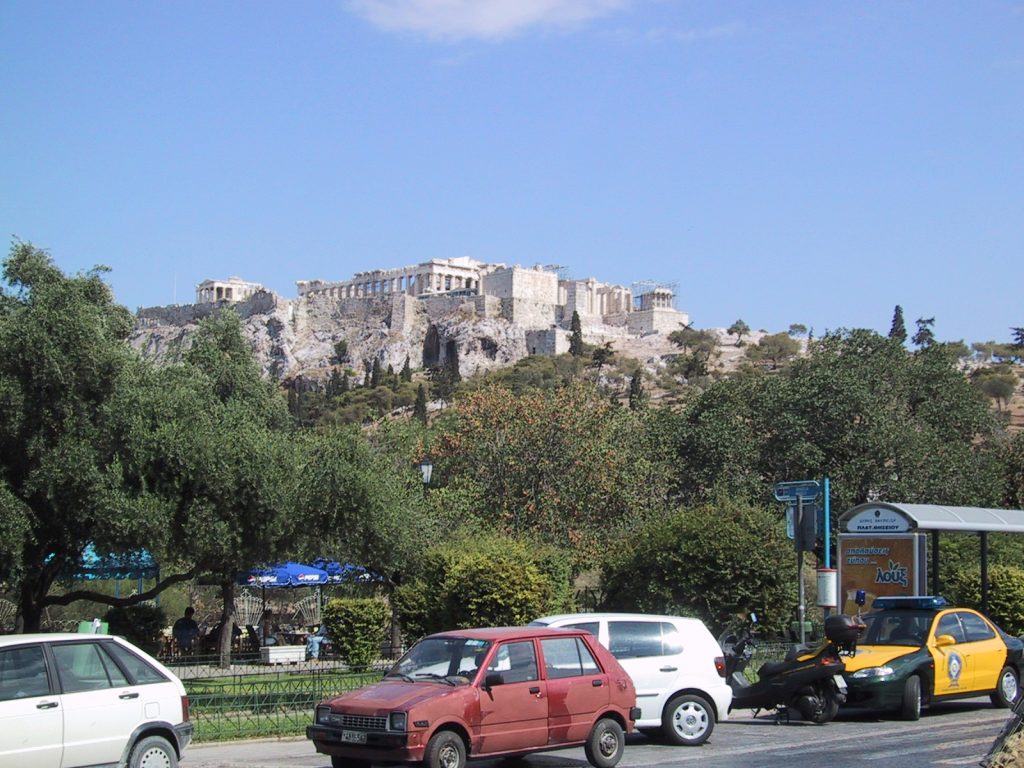 The best known ancient Greek site, the Acropolis in Athens. 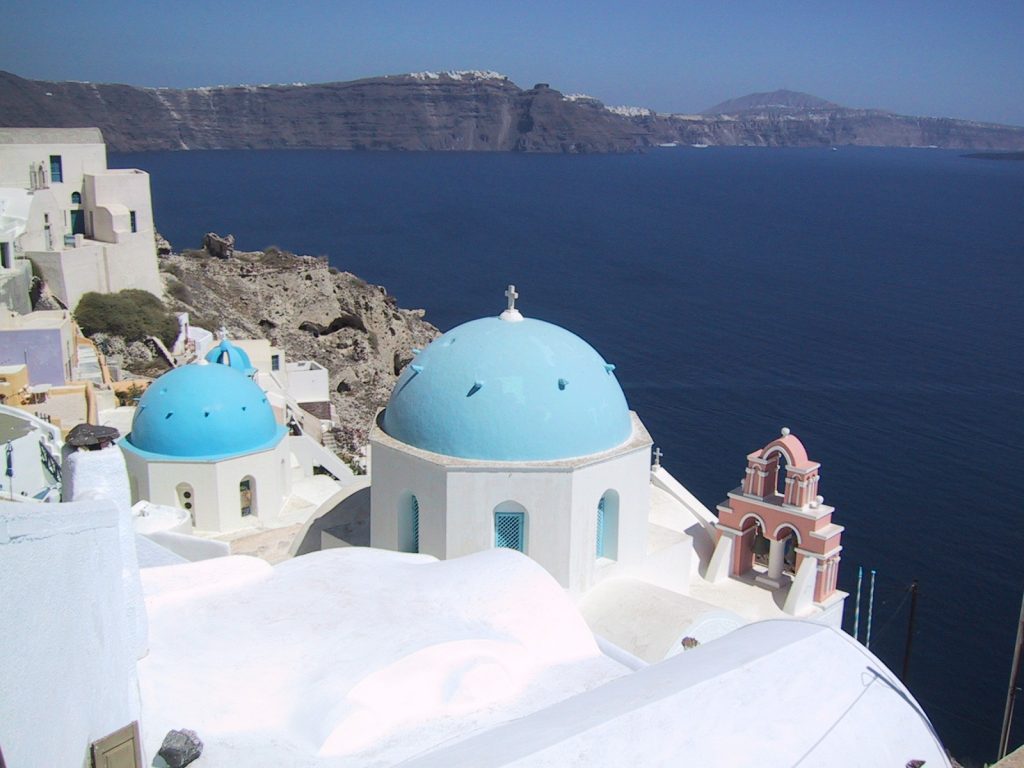 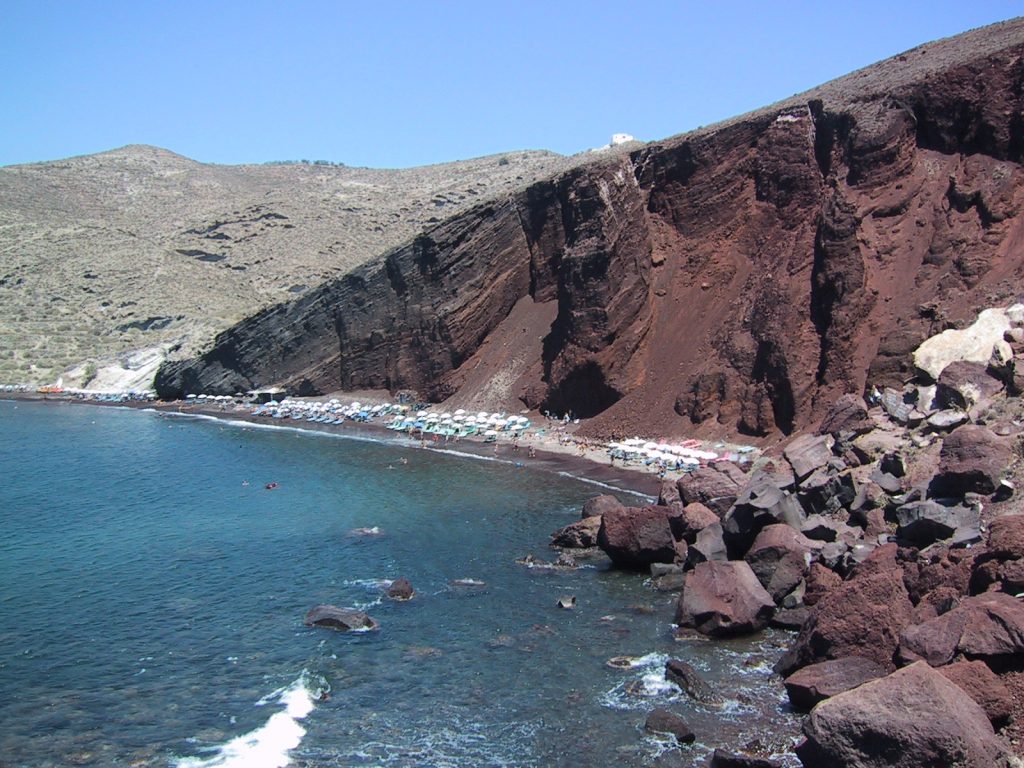 Red Beach, Santorini. A good example of the volcanic nature of the island. There are red, black and white areas. Most of the beaches are black sand, which gets very hot in summer. 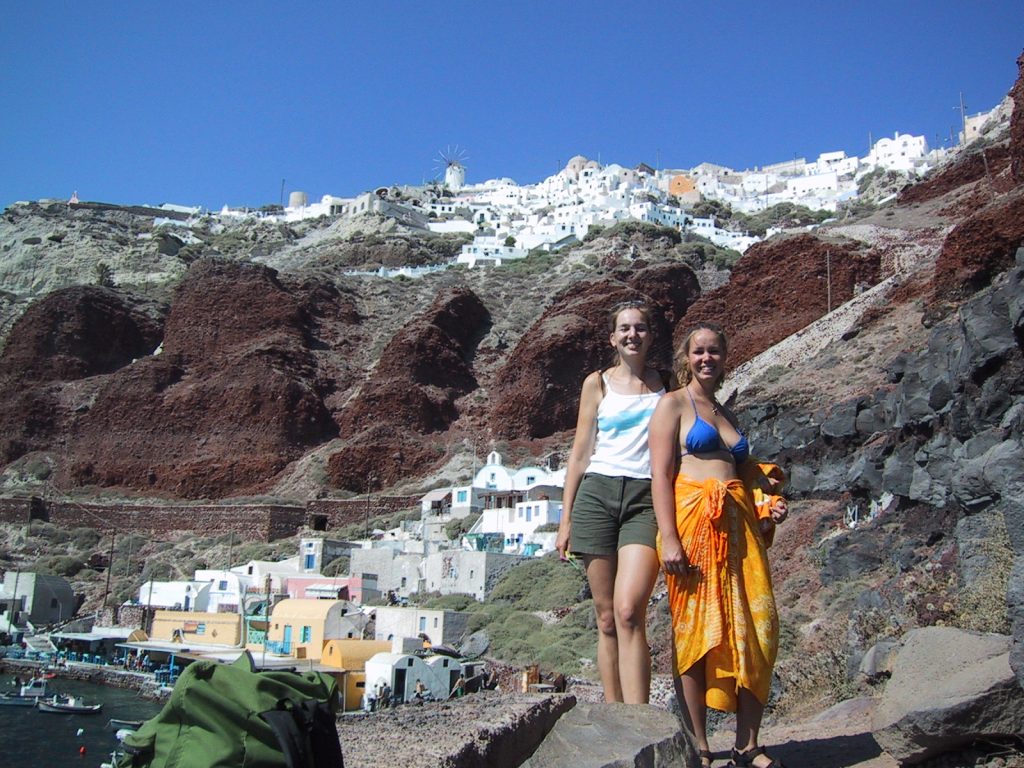 Santorini, active fishing village at Ammoudi, with the village of Oia above. There is a track between the villages where they still use mules to cart goods. Great seafood restaurants right on the water. Hi to Heimke and Marietta (apologies for the spelling, girls) from the Netherlands.

On to Crete next. Crete is over 300km long, and has some very high mountains. Together, that makes for some good riding. I had a ball, riding on the tight switchback roads, through the tiny villages, and enjoying some great panoramic views of the mountains, the sea and the farming lands. Crete grows much of the produce for Greece apparently, but the main crops I saw were grapes and olives. There are lots of tourists on Crete, but a good way to escape them is to get on the back-roads. When it is too hot down on the coast, I just head for the mountains. They are at least 6 degrees cooler. 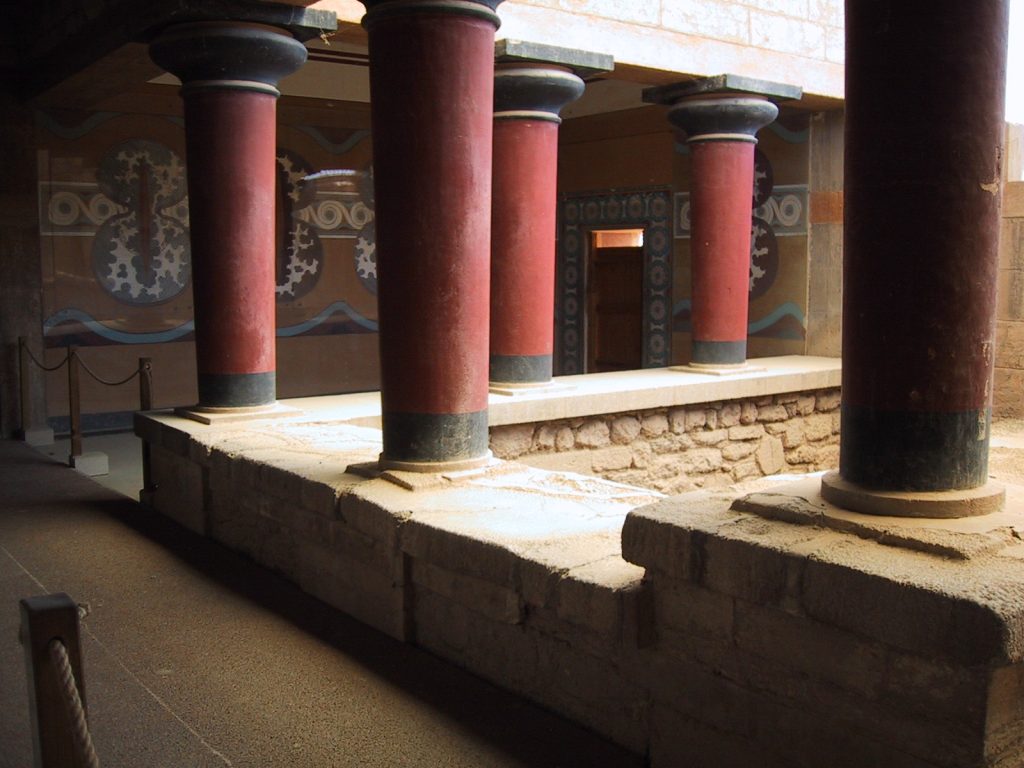 A partial reconstruction of the Minoan palace at Knossos, dating back almost 5000 years. Minoans were a very advanced society with strong cultural and economic links with the Egyptians.

Having just hiked Mt Olympus, I thought I would give the Samaria Gorge a go. The catch here is that one end of the hike is not accessible by road. What usually happens is that you catch a bus from Hania. It takes you to the top of the gorge (about 1300m), and then you hike the 16km to a ferry, which takes you to the nearest town, where the buses will be waiting for you. I couldn’t do that because I had the bike, so I hiked to the halfway point, and back up again, which was harder than doing the whole walk. I think there is about 1000m of altitude difference at the half way point, and again one of my knees gave me trouble. I’m not sure if doing these walks is strengthening the knee or making it worse, but running down the hill probably didn’t help matters much. 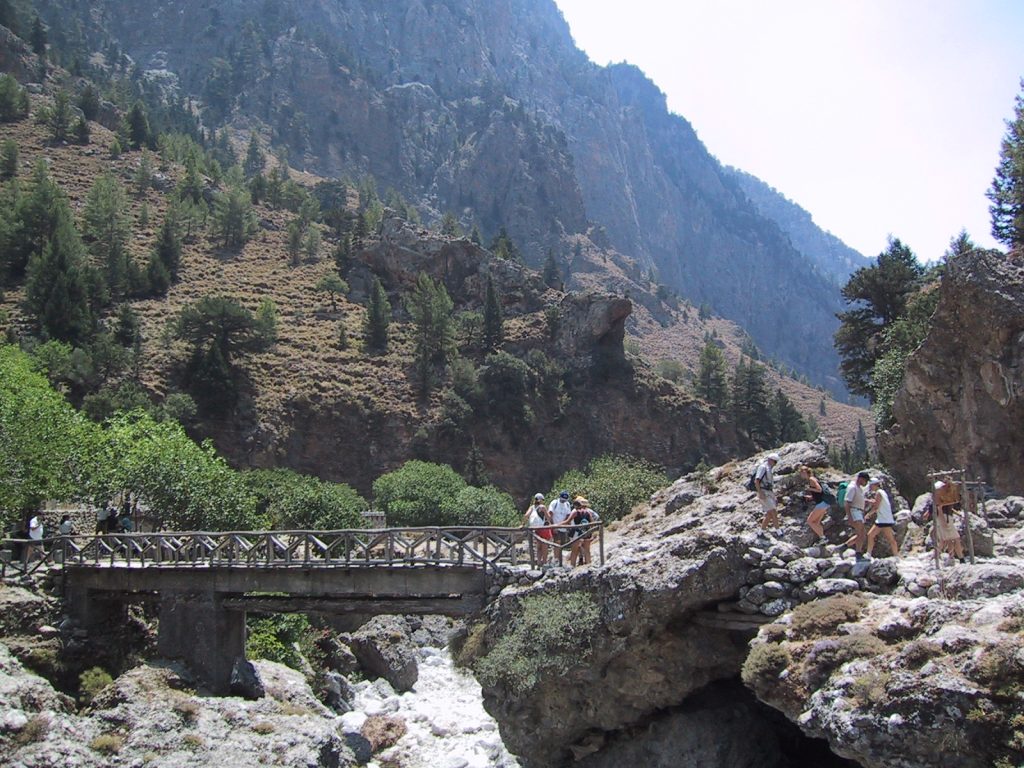 Samaria gorge. One of Europe’s most spectacular gorges. 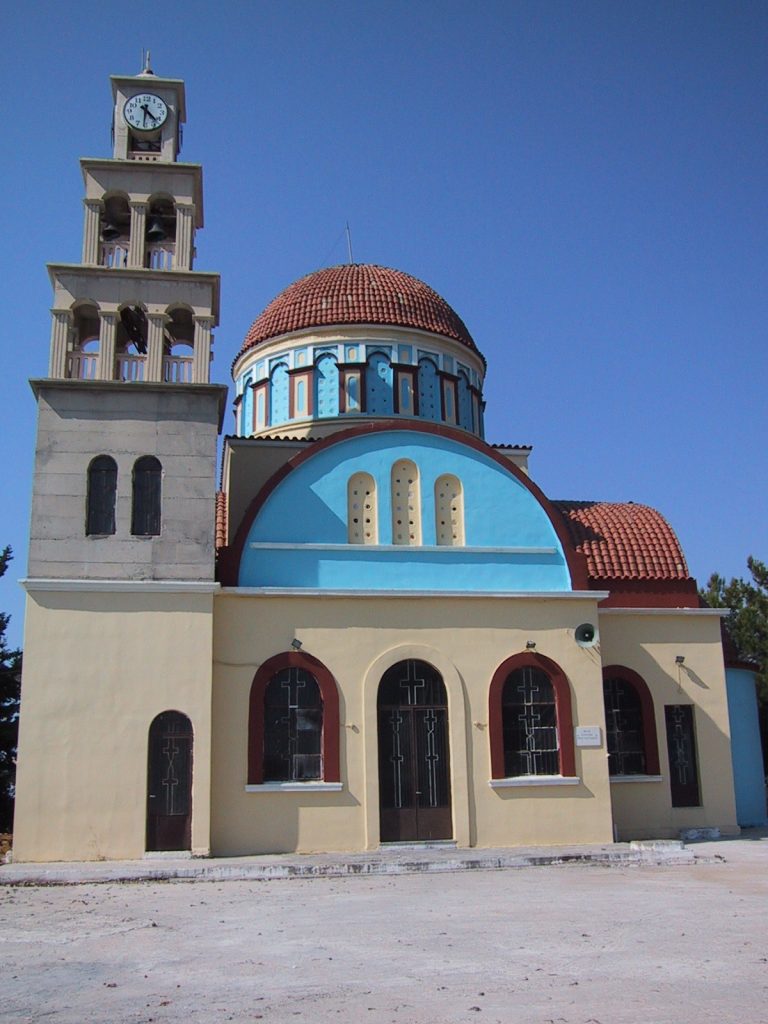 This immaculate church is typical of those in the tiny villages. No matter how humble the village looks, the church always has the best position, and is well maintained.

From Crete, it was a 12 hour ferry trip to Rhodes, just off the Turkish coast. The cost of the ferry was a reasonable 11,500GRD. In Rhodes, the first thing I did was organise my ferry to Turkey, since they are not very regular, and I wanted to know just how much time I’d have in Rhodes. The ferry is run by the Turks, and although it is only three hours, it costs 37,000GRD. The power of a monopoly! Had I have known that, I probably would have planned to catch the ferry back to Athens, and ride to Turkey (less than a day). 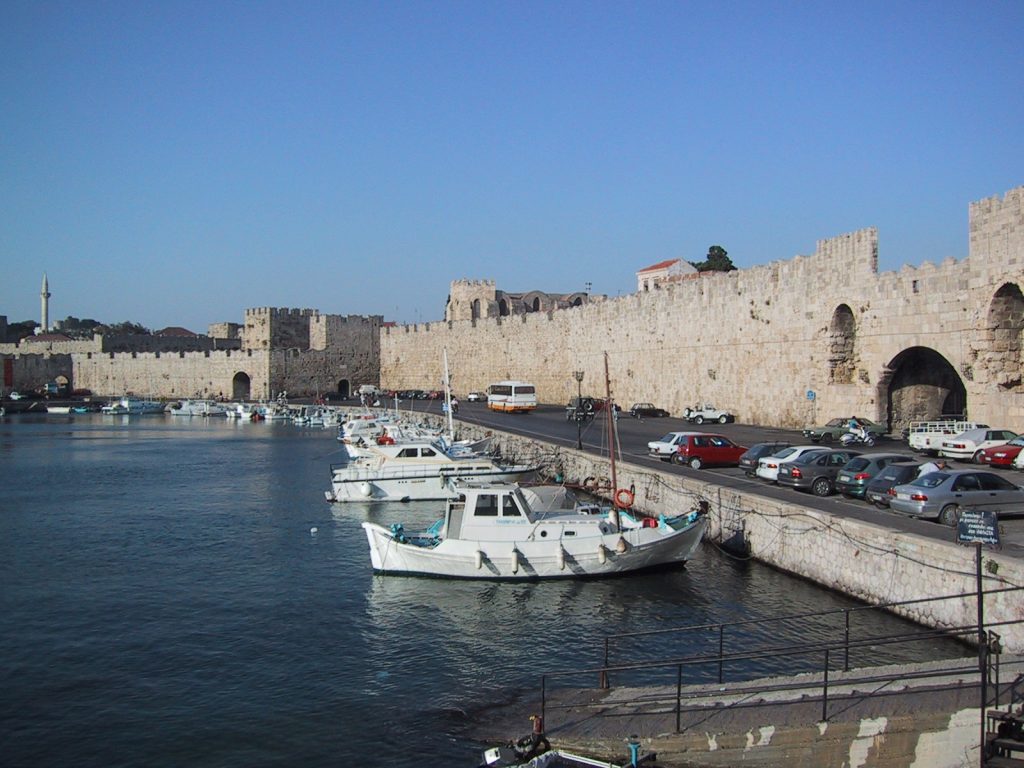 The city walls of Rhodes. If you like shopping, eating, swimming, cruises etc, you will love Rhodes. It surprised me by how commercial it is, but is interesting none the less. The old town is a maze of cobbled streets, and is very easy to get lost, much like Fez (Morocco)

1. Great food. I love fresh salads, seafood etc.
2. More affordable the western Europe, but probably not for much longer. Prices are rising dramatically.
3. Good mountain roads, great for motorcycles.
4. Plenty of history to see, in fact Greece is really the mother of modern western civilisation.

1. Poor value for money in peak times (July-August)
2. Squat toilets, and the fact that their plumbing can’t handle paper means you have to put the used toilet paper in a bin. It gets a bit on the nose at times.
3. Poor quality camping grounds, over-crowded, over-priced, under-serviced, dusty, rock hard uneven ground that is a pain for tents.