How are the prices? Unbelievable! I had heard that fuel was 5 cents a Litre, but I had expected it to be a lot dearer by now. Now it is cheaper because the Rial is loosing ground against the US dollar. For you weights and measures challenged people in the US, that’s 15 cents a US gallon. If it wasn’t for the price of the hotels, you would have a lot of trouble spending $5 a day. The hotels are expensive, and camping in the parks is free. I didn’t stay in any parks, because it is quite hot in the day at 40+, and if I didn’t have a shower, I couldn’t stand next to myself. The nights are quite pleasant though. The hotel pricing is artificially high because the government only licenses certain hotels to accept foreigners, and they are taxed much higher for us. the average Iranian wouldn’t make $US20 a week. Until Iran, the highest price I have paid for accommodation was US$10 in Istanbul, but to be fair, these hotels are better than most of the places I have stayed. None the less, a hotel room is just a clean bed and a shower to me. All the frills are wasted.

As I left Turkey, I finally started to get my appetite back. This started in Istanbul. I was down to one meal a day, and even then I was forcing myself to eat to keep my energy up, and prevent getting sick. I should have gone to a pathology lab to had the bug analysed and patented, then sell it to Weight Loss Centres. There were no other symptoms. I didn’t feel sick, I just wasn’t hungry.

I didn’t think I would ever get to Iran with all the hassles I had in Turkey. It was the first time I felt relieved after passing through a border crossing. It is about 2700km from one side of Iran to the other. In the last 2 weeks, I have:

1. A scratched eye
2. My camera (and irreplaceable photos) stolen
3. All the hassles of getting the replacement camera.
4. Diarrhoea
5. Hot/cold fever for a few days
6. Loss of appetite
7. Arrived in Ankara after a 16 hour bus trip to be told my Iranian visa wouldn’t be ready, for another 7 days
8. Border crossing closed.
9. Crash

I entered Iran via the southern border crossing of Sero, which is rarely used by tourists. Most use the northern crossing of Bargarzan. My first stop was Mahabad, not that far into Iran, and still Kurdish territory. As I said in my Turkish story, the Kurds are an ethnic group, with their own language, and live in an area that includes eastern Turkey, northern Iraq, and western Iran. As someone once said, borders only exist in the minds of politicians. When the borders were drawn up early last century (that still sounds funny to call the 20th century ‘last’), they forgot about the Kurds. As I stopped, I was mobbed by children and adults alike. I was a real novelty! This has been pretty much the same response I have had everywhere, in varying degrees. I talked with them for 30 minutes or so, in broken English and charades, then got directions to ‘the’ hotel. I wasn’t prepared for the US$20 cost for a bed, but I had no choice but pay it. Apparently, their usual rate is $30, but they gave me a discount. It was here that I found a peculiarity in their money system that you should be aware of if you ever come here. The unit of currency is a Rial, but most people work in a unit called a Toman. Anyhow, 1 Toman=10 Rial. When they gave me the price for the hotel, they said 16,000. I did some mental arithmetic, and that was US$2. Bargain! But then they told me about the Toman, meaning the cost was 160,000 Rial, or US$20.

While I was registering, I started talking to a Kurdish Iranian, who had been living in Toronto for the last 14 years. He was sent there as a refugee after the Iranian Government bombed this and many other towns in their war against the Kurds. He was telling me that his parents were amongst the 1400 civilians that died in this town alone. There is no sign of any problems here at the moment, but it is a very poor area, and poverty breeds dissent. He took me out to dinner, then we took a taxi to his brothers place for tea. He insisted on paying for everything, though it was ridiculously cheap.

On my way again at 7am, riding directly into the sun, since I am heading east. Many of the roads are shinny, and reflect the sun, making visibility very poor. I was trying to reach Esfahan that night, but could only make a big industrial city called Arak. I only have a 5 day transit visa because a tourist visa takes 30 days to get, and I’m not going to hang around anywhere for that long. I could get a visa extension, but I decided not to. I wanted to spend a day in Esfahan and one in Bam. That means I have to average 900km a day, which I thought shouldn’t be a big hassle, but the last two days, I have only covered about 900km (though I lost 3 hours at the border, plus another 2 trying to find somewhere to change money on a Sunday). It was tough going. Narrow twisty roads with lunatic drivers trying to run me off the road, and a severe cross wind. By this stage, I was getting worried about getting through in time, but the next day, I was on a great road where I was able to average over 100km/h including a stop, but I had only 320km to Esfahan that day, as I really wanted to see this place. 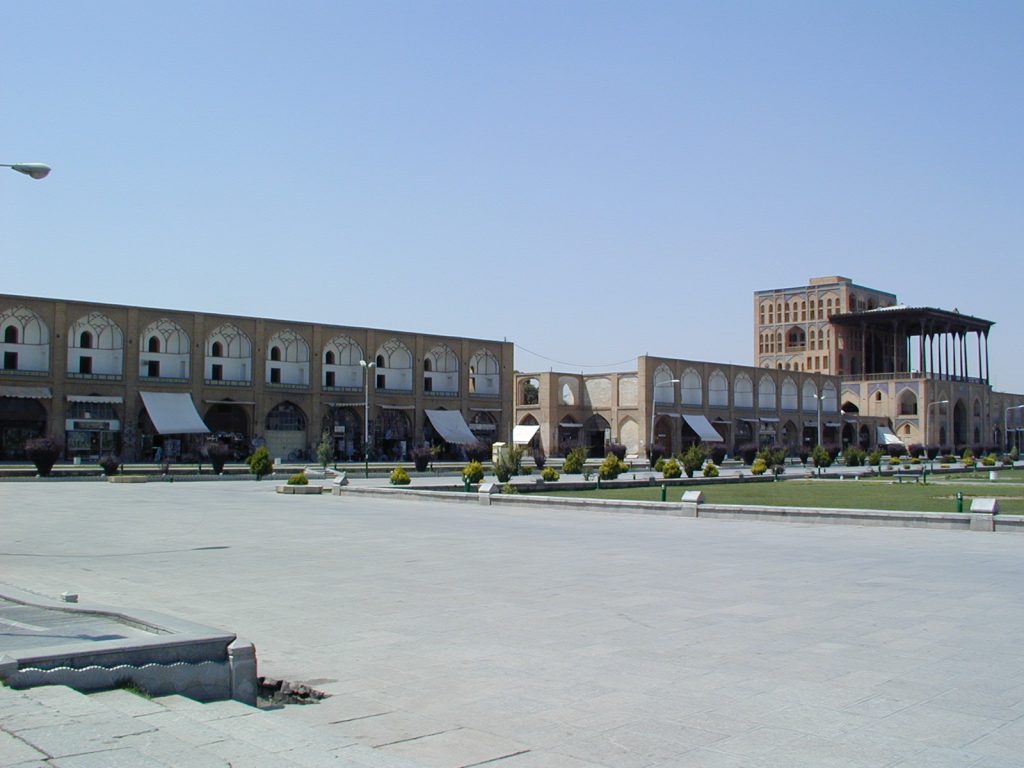 Imam Square, Esfahan, built about 400 years ago in 1066. My maths isn’t off. It took me a while to realise that it was 1066 in Muslim years, since Muhammad the profit. Alighapoo Palace, the tall building on the left was used by the Sultans to watch polo being played on the field below. Picture taken from the front of Imam Mosque. 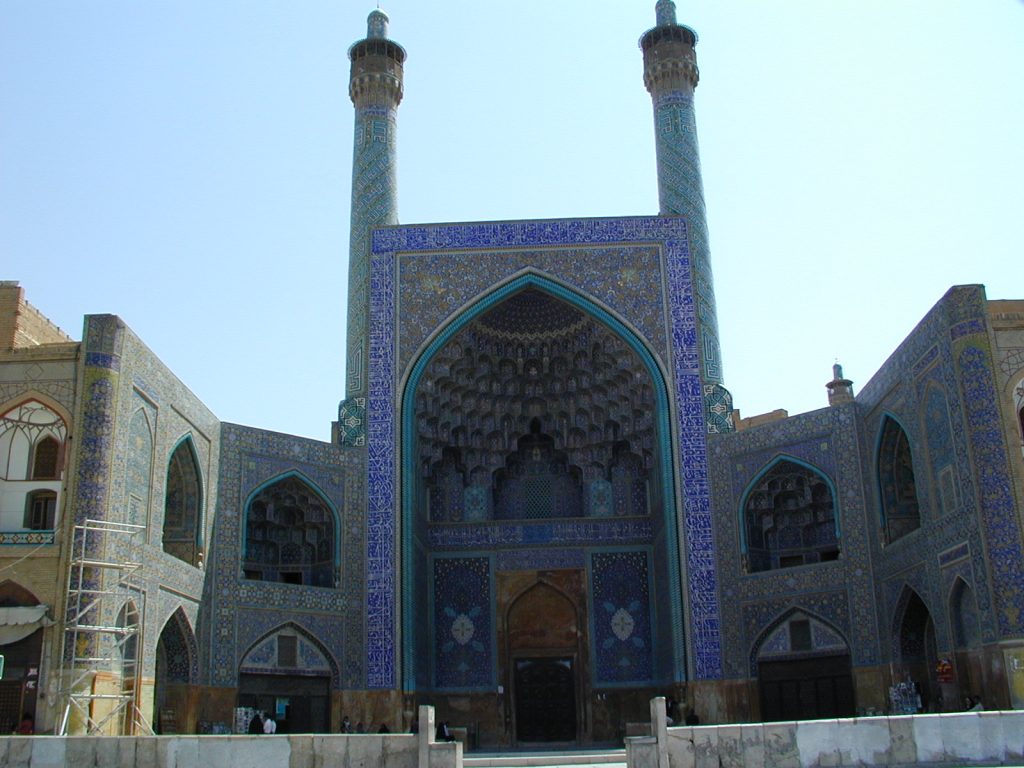 The entrance of extraordinarily beautiful Imam Mosque. A must-see. 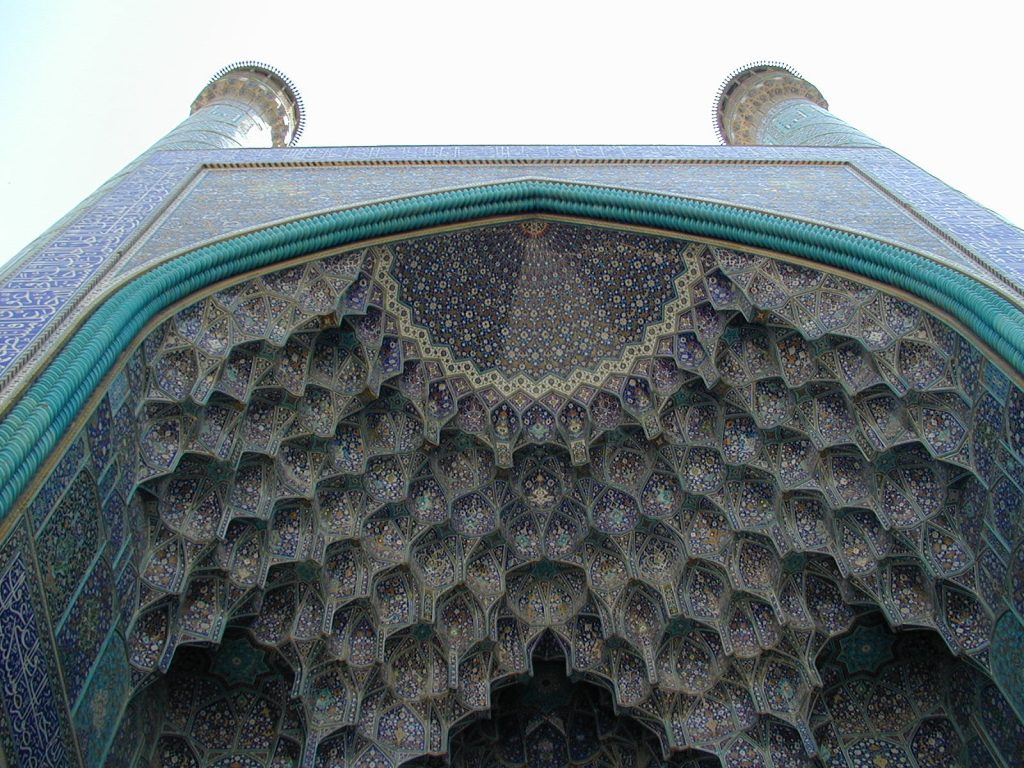 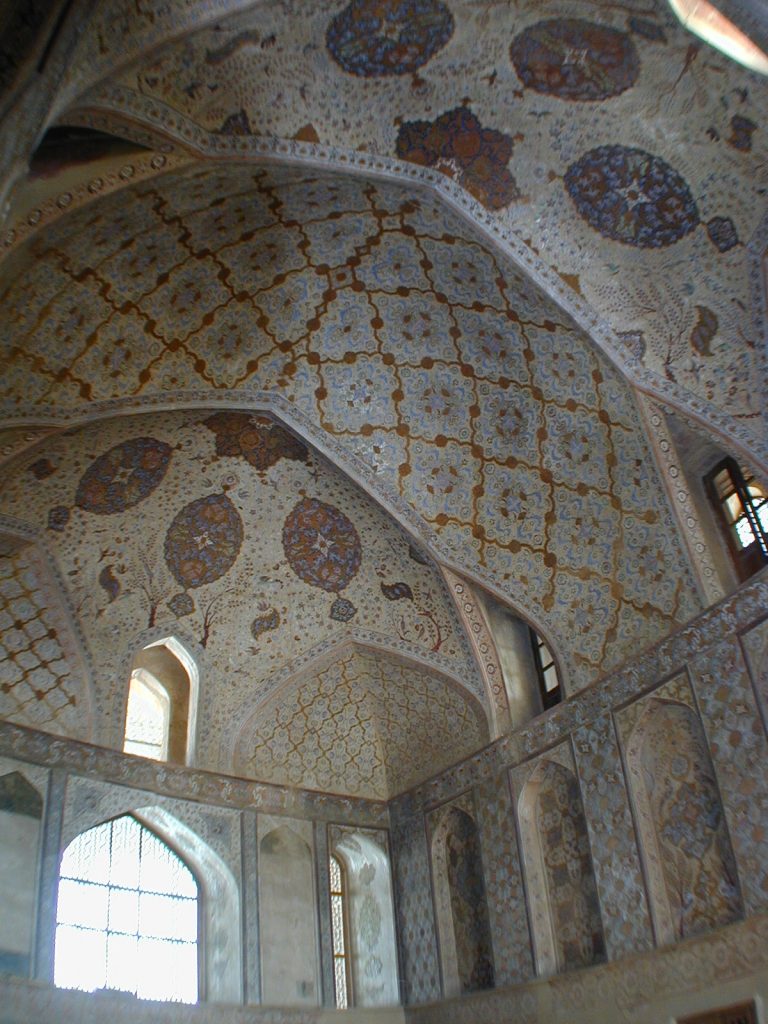 0026. Persian art work to a ceiling of the Alighapoo Palace. 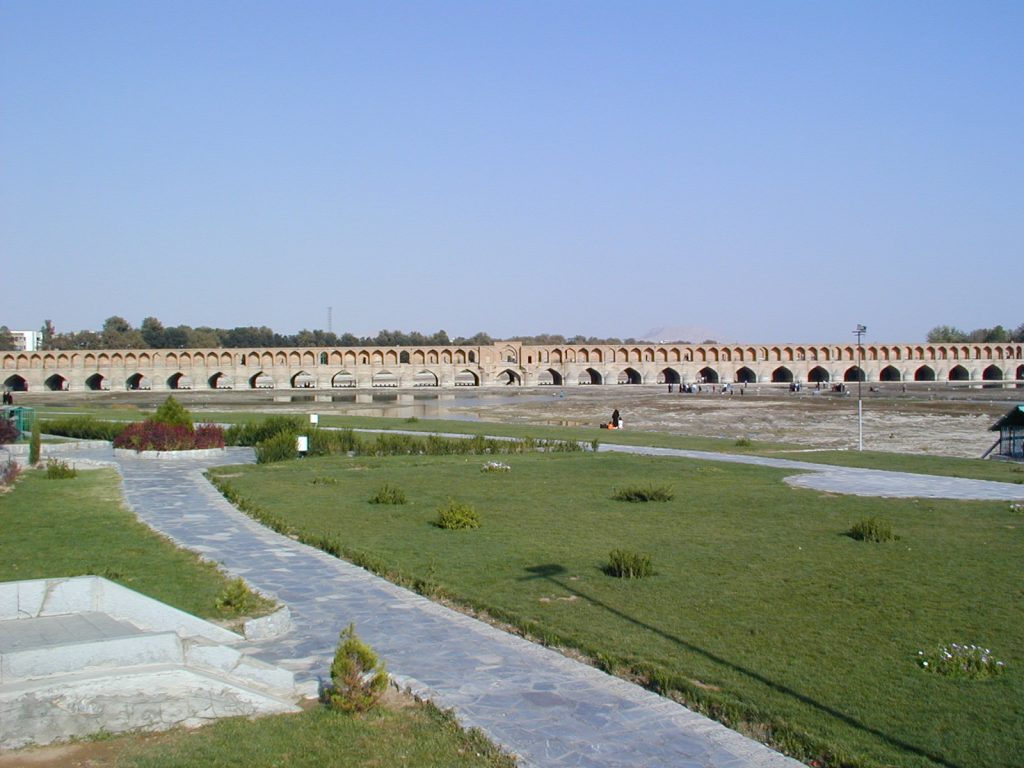 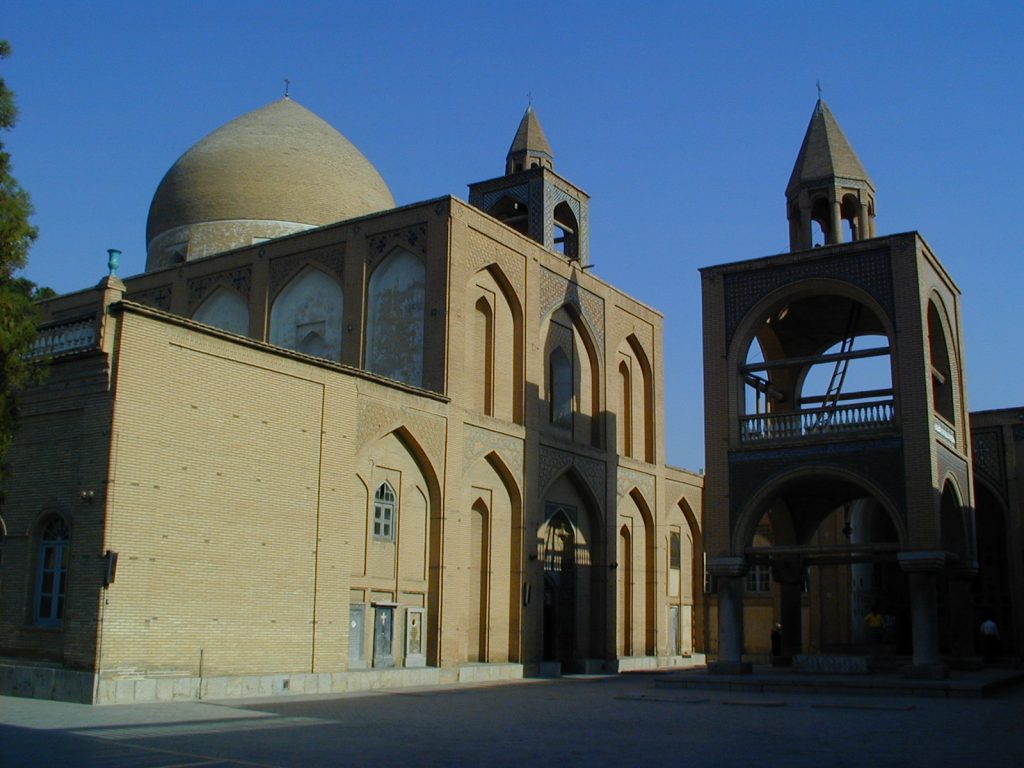 An Armenian Christian church. Still an active church, and Christianity is allowed to be practiced in this Islamic fundamentalist country. One concession they had to make was to make the domes and arches look Islamic.
From Esfahan, I headed for Bam. A desert town close to the Pakistan border. It was 900km, and again, I wasn’t sure I could do it, but I did, and with time to spare. The road was excellent, double lane, dual carriage way for much of the distance, but I had a few navigational difficulties in some towns where the road doesn’t just pass straight through. Signage on the highways is OK, with Latin script, but in the cities, there is virtually none. I don’t know how anyone could navigate here without a GPS, or knowing how to read Farsi.

At Bam, there is an excellent place to stay called Ali’s Guesthouse. Clean, great showers, cheap, provide meals if you want them. The town itself is nothing special, but it does have an incredible place called the Ark, a deserted Citadel built entirely from mud. 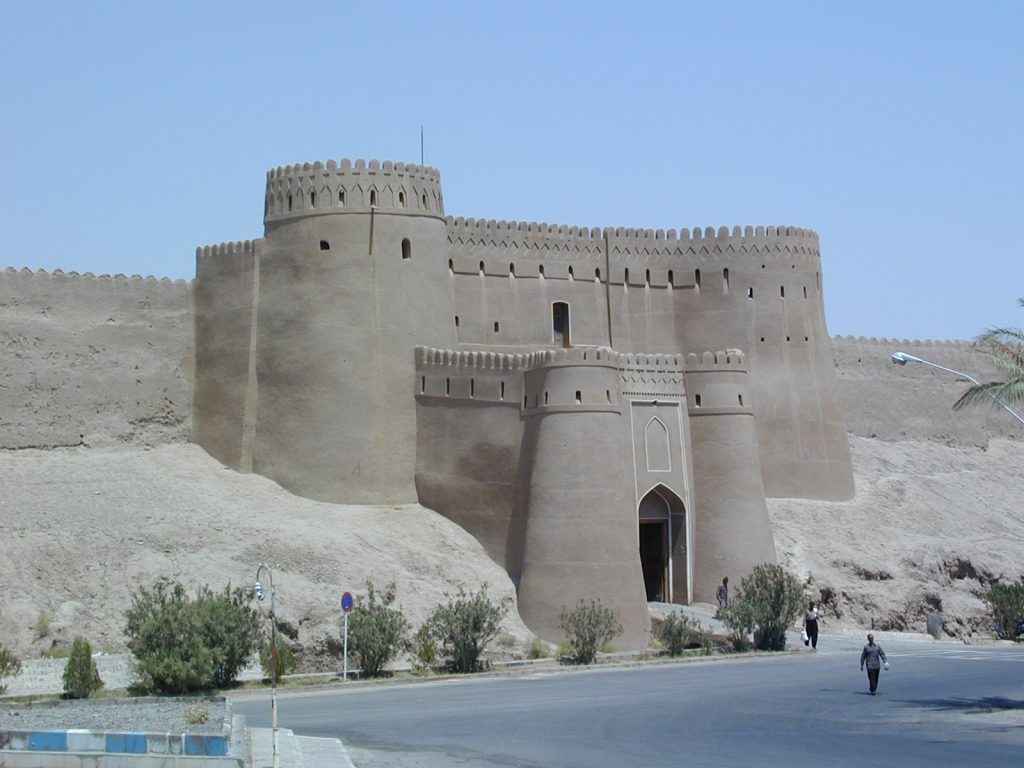 The entrance to the ‘Ark’.  What an absolutely amazing place. click the link: Arg-e Bam 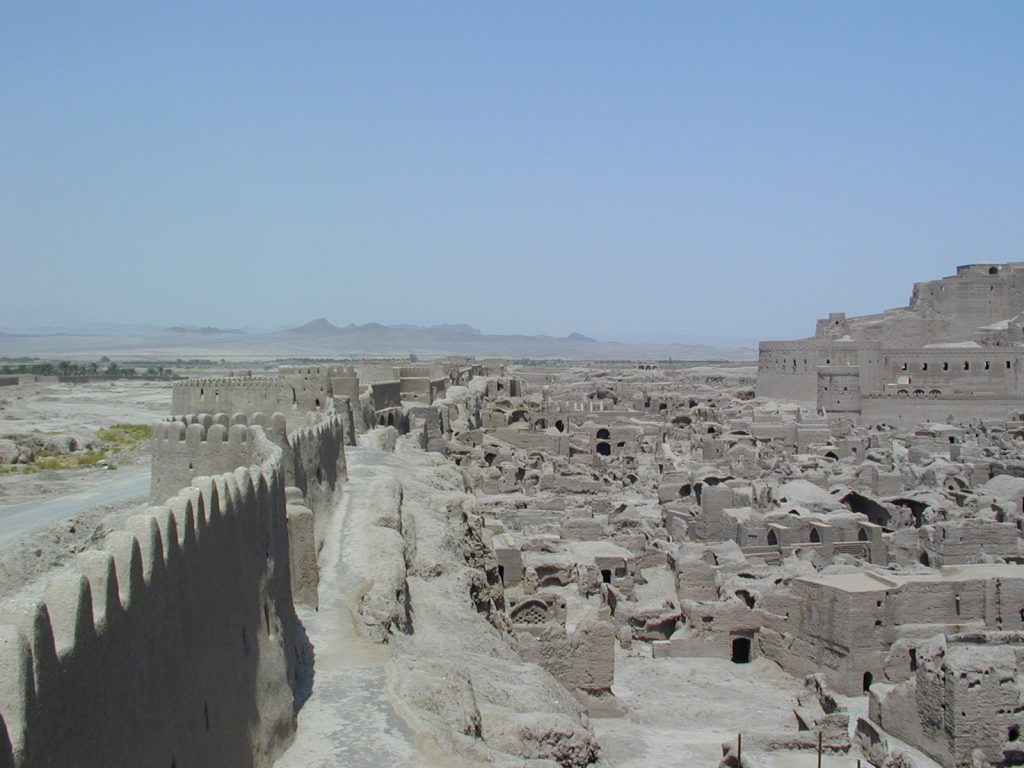 Overlooking the mud city. The palace on the hill in the background.