Getting in to Israel was a bit of an experience. After finally getting out of Egypt and onto Israeli soil, I had to follow an armoured car through a section of ground that looked like a war zone. This was the Gaza strip of course, and the armoured car was used to shield me from any bullets. After a few kilometres, we arrived at the customs station. Every vehicle was checked for bombs, and they had sophisticated gates to stop anyone from ramming their way through. Then I had to go through customs, and as I expected, they were very efficient and thorough. All my bags were unpacked, everything opened and X-rayed. I was asked what everything was, why did I have it, and where was I going and why. The efficiency and thoroughness of the Israeli’s was impressive, and a stark contrast to the Egyptians.

Israel was always a maybe to me. I would have rather gone to Jordan and Syria, but the cost of just entering those countries deterred me. As it was, Israel is a bit of a shock with it’s expense. It costs nothing to get in, but once you do, you pay and you pay, and you pay. I would say it is more expensive than most of Western Europe. Having just come through 3rd world Africa, the expense was even more of a shock.

Expense aside, I did enjoy my time here, and I did learn a bit about the conflict with the Palestinians. I had come from the border headed straight for Jerusalem. Along the way, some roads were blocked with huge mounds of soil and rocks and smashed concrete over 10m high, with no signs of alternate routes. I just had to figure out for myself how to get through. Eventually I made it, after zig-zagging my way though a network of back roads, and a few security checks from bewildered looking Israeli security people, wondering where the hell I came from. I came into Jerusalem via Bethlehem, and I must admit thinking to myself that it truly is amazing to be riding over the very earth Jesus walked. No matter whether you are Christian, Muslim, Jewish, Buddhist, Hindu, animist or whatever, I believe Jesus was the most influential man to ever walk the face of the earth.. It was Jesus who introduced some very powerful concepts such as forgiveness, turn the other cheek, and put and end to barbaric sacrifices. It was Christians that staged the crusades, the colonisation of the world, the industrial revolution that now permeates every society, and the system of government adopted by the West. I’m not suggesting it was all good either. I am fundamentally opposed to missionaries and colonisation. There are few cases anyone can prove to me where the subjects actually benefited. The crusaders were a largely bunch of thieves, thugs and murderers. The industrial revolution brought about shocking working conditions, and a system that threatens to segregate the world into the haves and have nots, where the poor get poorer (3rd world) and the rich get richer (the 1st world). Of course without the industrial revolution, we would never have motorcycles, so there are some up sides! Christianity may be the religion behind all this development, but I’m sure God must be disappointed at the way we achieved it, and even more so at the way Christian churches conducted themselves in the past, and even today.

I try not to get too involved in politics in this web site, but it is hard not to talk about religion and politics in Israel. They are fundamental to it’s very existence. I originally had a 12 paragraph rave about the politics and religons in Israel, but I decided to remove them. Not because anyone complained, but I probably should just shut up. I certainly don’t have the answers. 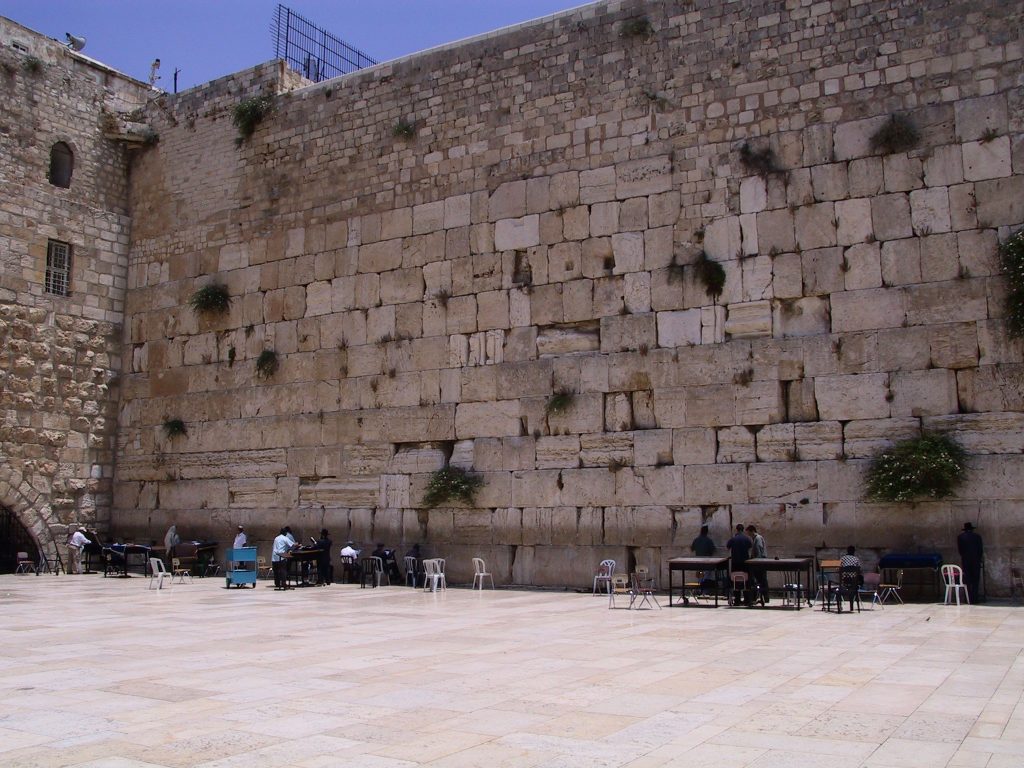 The West wall, or the wailing wall is the most accessible of the four walls of the Second Temple, built by King Herod around the time of Christ. This is particular importance to the Jews, who come here to pray from all over the world. 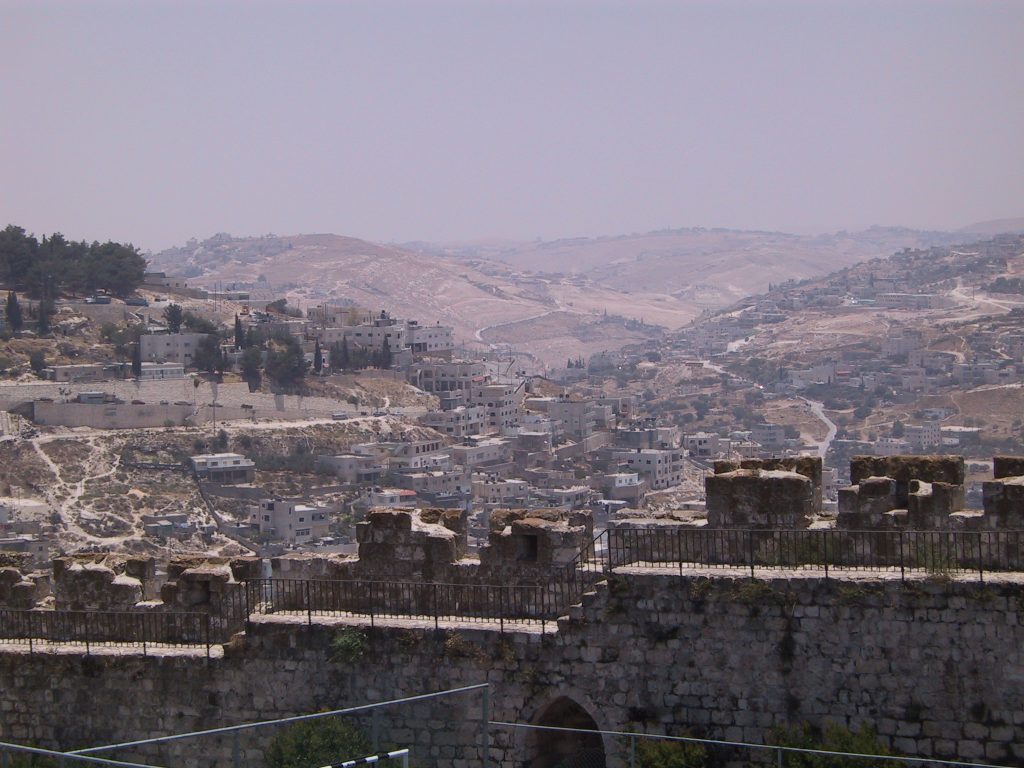 The Mount of Olives, where Jesus ascended to heaven. 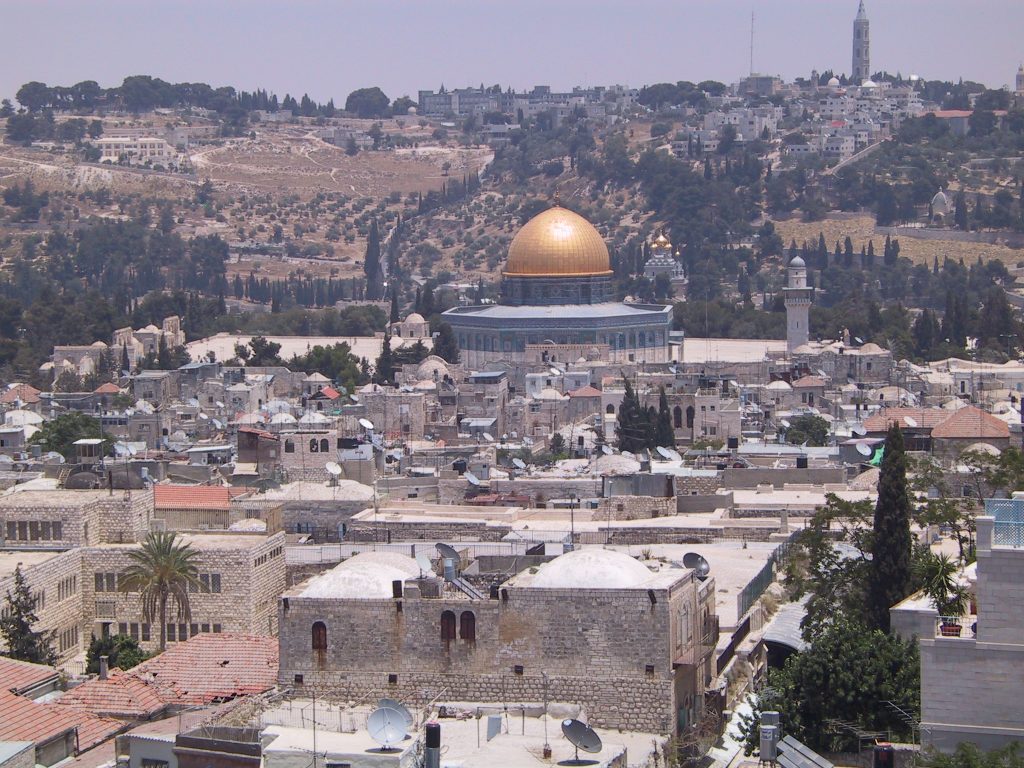 Temple Mount. This is what all the fuss is about, where Mohammed rose to heaven and where God instructed Abraham to sacrifice his son. Now dominated by the magnificent Dome of the Rock mosque. I tried to get there, but it is impossible to get anywhere near the place unless you are a Muslim. It is protected by Israeli guards. 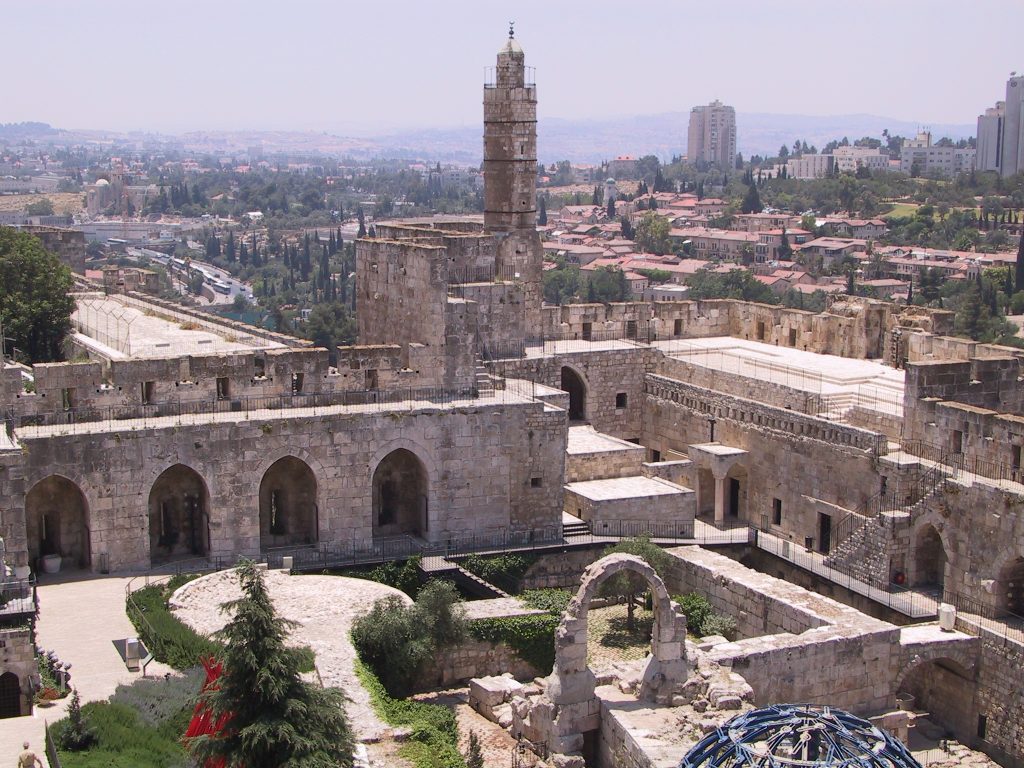 Much of the construction in Jerusalem was done in the 16th century by Suleyman the Magnificent, a Muslim ruler who allowed the co-existence of Christians, Jews and Muslims. It was a peaceful time, in fact believe it or not, most of Israel’s history has been peaceful in spite of rule changing hands untold times. 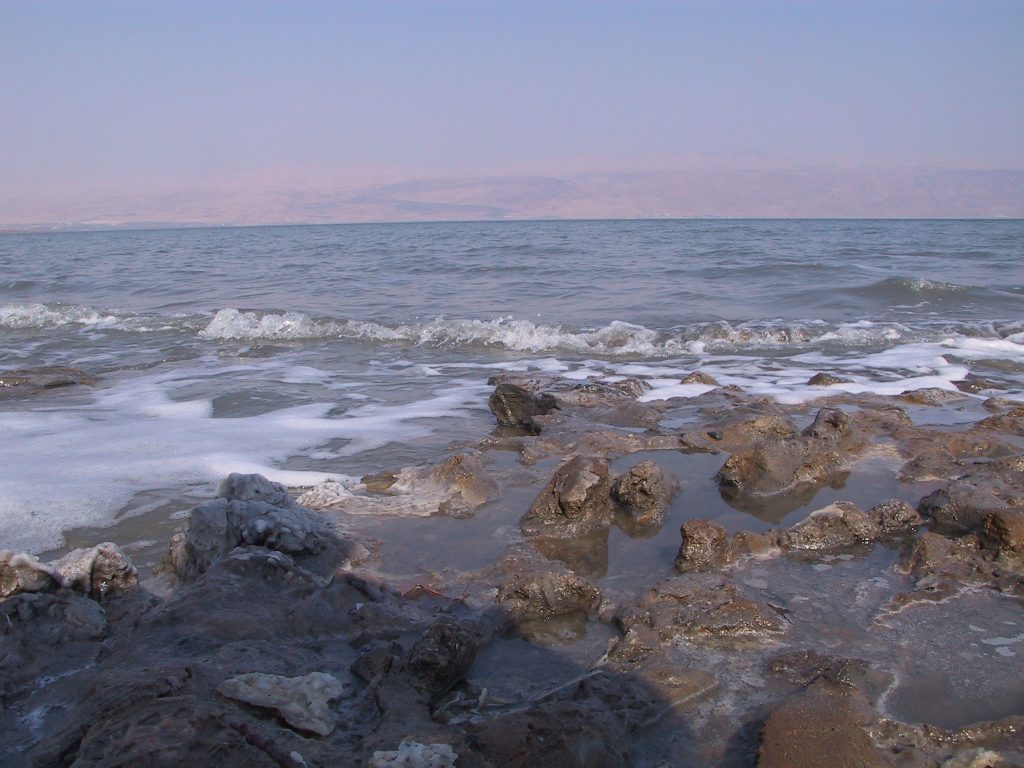 The dead sea. 410m below sea level, and it is HOT. When I left Jerusalem, it was a mild 24°C, but it must have been close to 35°C here, yet it is only a 30 minute ride. People just sit in the water and float about like they are on a floatation device, because the salt content is so great that your buoyancy so much better than in sea-water. I didn’t try it. It was too hot, and I couldn’t think of anything less enjoyable at the time. Another favourite pastime here seems to be to plaster the mud from the bottom over their bodies as some sort of beauty treatment. I’ll stay ugly thanks. The hills in the distance are Jordan. 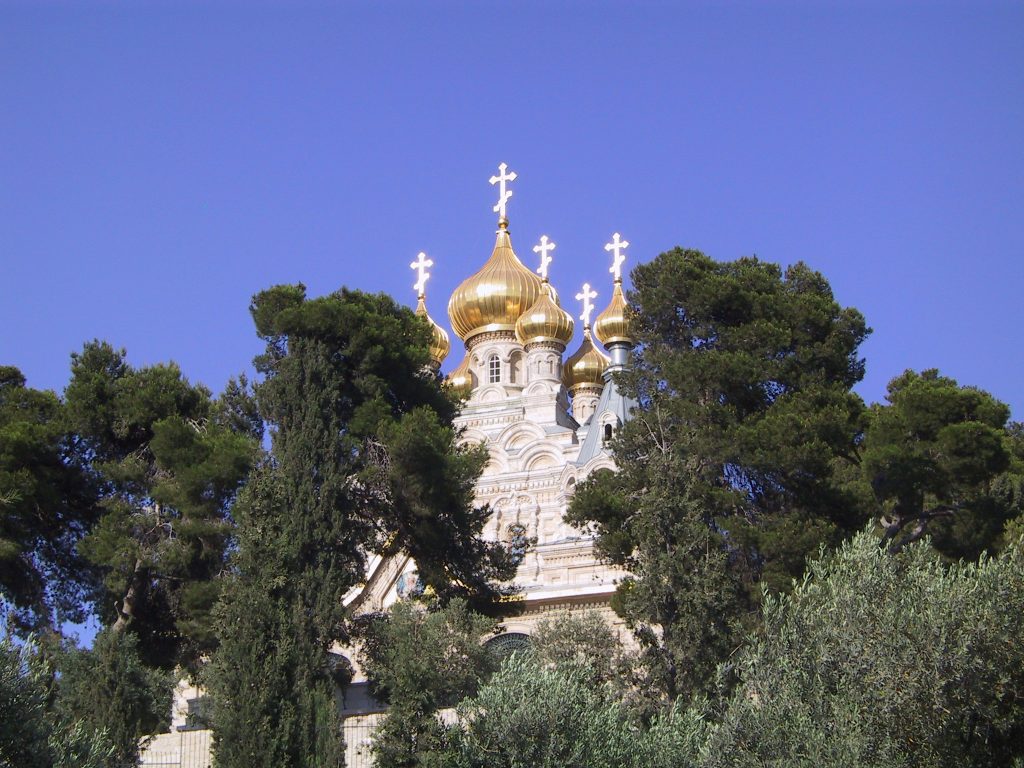 Russian Orthodox Convent of St Maria Magdalene.
While in Jerusalem, I started talking to some young Arab guys, probably early twenties. One was a blue eyed blond, and the others I couldn’t tell from an Israeli. They had been admiring my bike. It is not often any motorcycles pass through Israel they tell me, and they have never seen one like mine. They were Muslims, and told me much about the situation from their point of view. They were born in Jerusalem, but at a time when it was a part of Jordan, so they are Jordanian citizens. When Israel took over control of Jerusalem after the 1967 war, none of the Arabs were granted Israeli citizenship, and they have become virtual prisoners in their own home town. They can’t go into nightclubs or bars like an Israeli citizen, even if they are friends. They don’t like the West Bank Arabs, because they are ‘crazy fanatics’, besides, they consider themselves European just as the majority of the Israeli’s do, not Middle-Eastern . They see themselves as stuck between a rock and a hard place.

I found them very friendly and rational. I can understand their plight. They took me for a ride around town at night to all the major sites, then bought me a piece of pizza and a coke at a friends shop. Then they took me to their motorcycle garage. They only had scooters, but they had photo’s and magazines of what they wanted. I doubt any of them believe that they would ever own a ZXR900 or a GSX1000R, but they were their dream. Then they took me through the Palestinian area, and the difference was amazing. Everything was shabby and poorly constructed. The driving was dangerous and hectic like most Muslim countries. The people loud and aggressive. The yards were dirty, strewn with rubbish and no plants growing. Finally, they took me back to the hostel. It was a very enlightening evening. I got to all these famous biblical sites, and saw Jerusalem from the several visual and political perspectives..

From Jerusalem, I went straight to Haifa to catch a ferry to Cyprus and then Greece. There is much more to Israel than Jerusalem, but I just couldn’t afford to stay. On arriving in Haifa, some of the streets were blocked because a car bomb was found. Later I was walking along, and two plain clothes police grabbed me and started yelling at me in Hebrew. I looked back blankly, and they realised I was a tourist. They told me I mustn’t go down that street because there was another bomb. There were no signs or barricades, so I assume they had just found it.

Getting through customs was an eye opener. I thought getting in was difficult, but getting out was even more so. I was thoroughly interrogated about the Muslims I was talking to in Jerusalem (I had volunteered that I was speaking to them), and they searched everything visually, with X-ray, and sniffer devices for explosives. I was asked about everything in my kit. What is the GPS for? Why do you travel with a computer? What is in here? Did you pack this yourself? Did anyone else ever have access to your luggage? etc. The interrogation lasted about 45 minutes. Finally I was on my way on the ferry. I met a group of Finnish UN soldiers going home from a stint in Lebanon. They were a great bunch, and they certainly know how to enjoy a drink to two. They gave me their phone numbers and email addresses if they had one, and then I promptly lost the list. I was hoping to see them on my way through Finland. Every one of these guys had a near new expensive car or motorcycle. It is one of the perks of being a UN soldier. They can buy a vehicle tax free, and bring it back to Finland free. Finland have really high taxes, and the tax on the car alone can come close to being worth a years salary. Motorcycles are about double the price we pay in Australia from what I can tell.