Entering Malaysia is simple. It didn’t take more than 10 minutes to get in or out. They don’t seem to care about carnets, but it could depend on who is checking the vehicles. However, physically just getting to the border was a problem because of the flooding.

In general, the roads are excellent. Well designed, wide, safe. As good, if not better than many western countries. Malaysia also has the distinction of being the only SE Asian country that allow motorcycles on motorways. 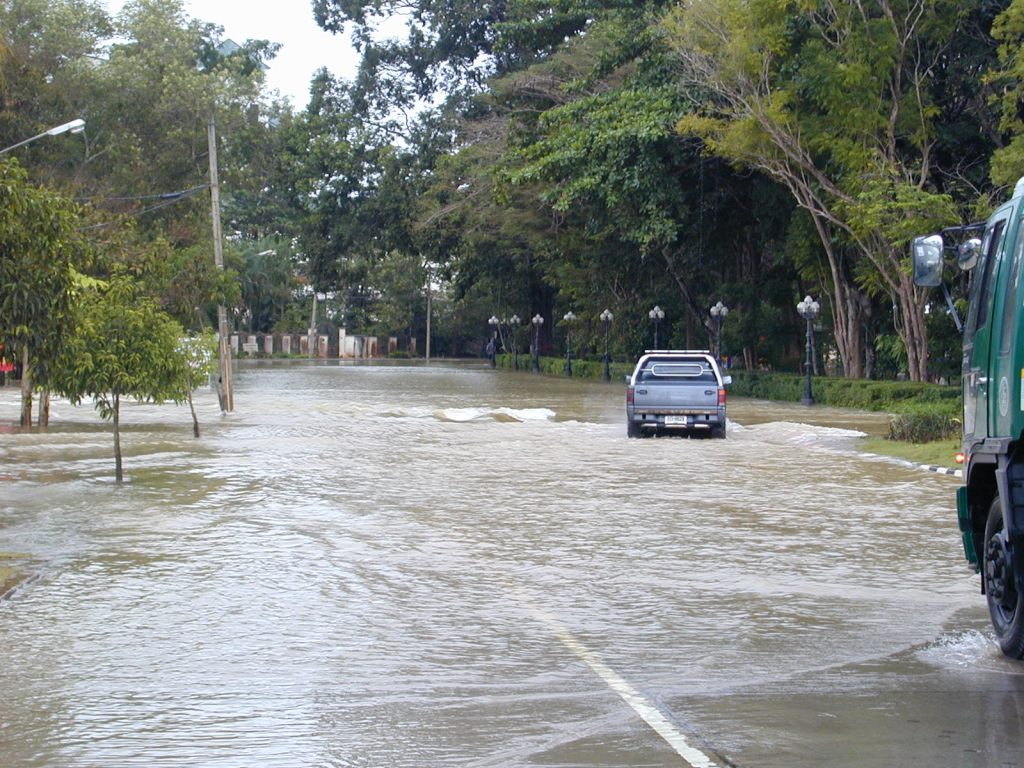 We had to ride through water up to 600mm deep for several kilometres. We were the only motorcycles getting through because the scooters air intakes are too low. 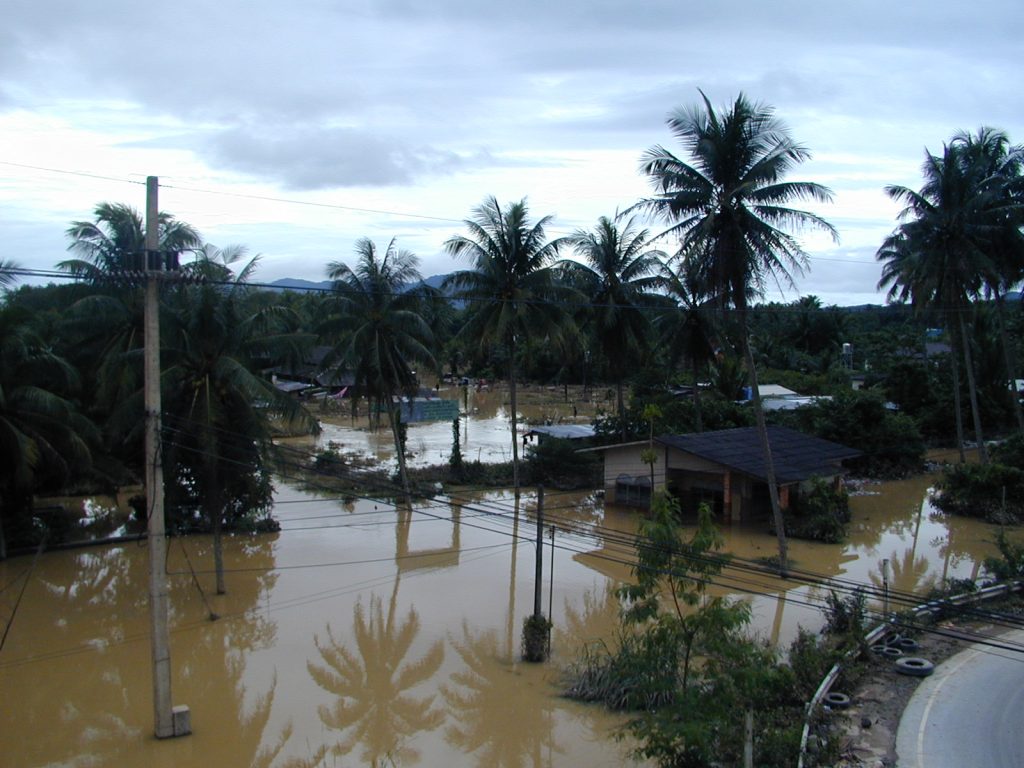 We saw whole housing subdivisions underwater. One subdivision looked brand new, with expensive houses. I think there will be a lot of unhappy tenants, and happy lawyers 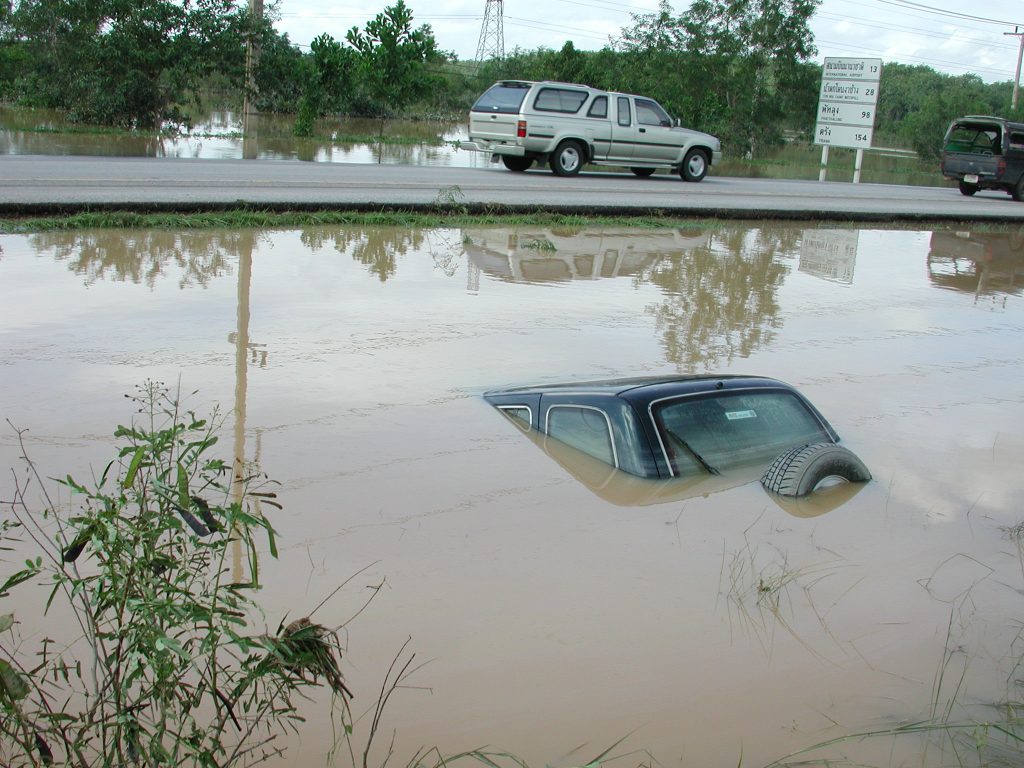 We arrived at the border late in the afternoon, and had to stay in the border town called Keroh. I hate border towns. They are almost always dirty, uninteresting, and expensive. Keroh didn’t change my opinion. Here we paid for the worst and most expensive room of our whole stay in Malaysia. Then we went for a drink. We were in for a shock! After coming from Thailand where a large beer is US$1, we were surprised that it would be 3 times the price here. The reason no doubt is that it is a Muslim country, where in my experience, alcohol is always dearer, if it is available at all. The price curbed my drinking……a little bit anyhow.

The next day, we headed off to the Cameron Highlands, to escape the heat, and check out the reputedly beautiful scenery. The road up to the plateau was great. I love mountain roads, but at the bottom of the range, many of the corners were multiple radius. Several times I came into a corner, correct speed, to find it tightening up dramatically. It got more predictable further up the mountain, but there were still a few surprise corners. Both Cuan and I nearly got caught out on the same corner, but we were riding really hard. We both backed off a little after that. 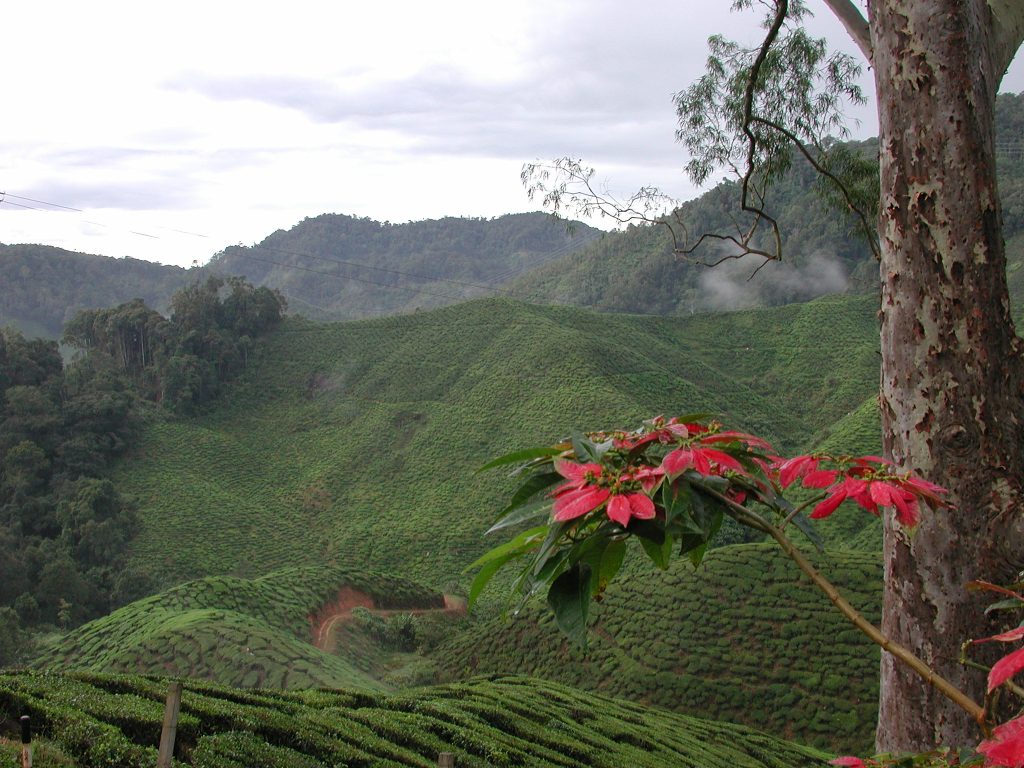 The Cameron Highlands. Famous for tea growing, flowers, fruits etc. Almost always cool, a popular destination for backpackers as well as wealthy locals who frequent the golf courses. There are some very expensive luxury resorts here. 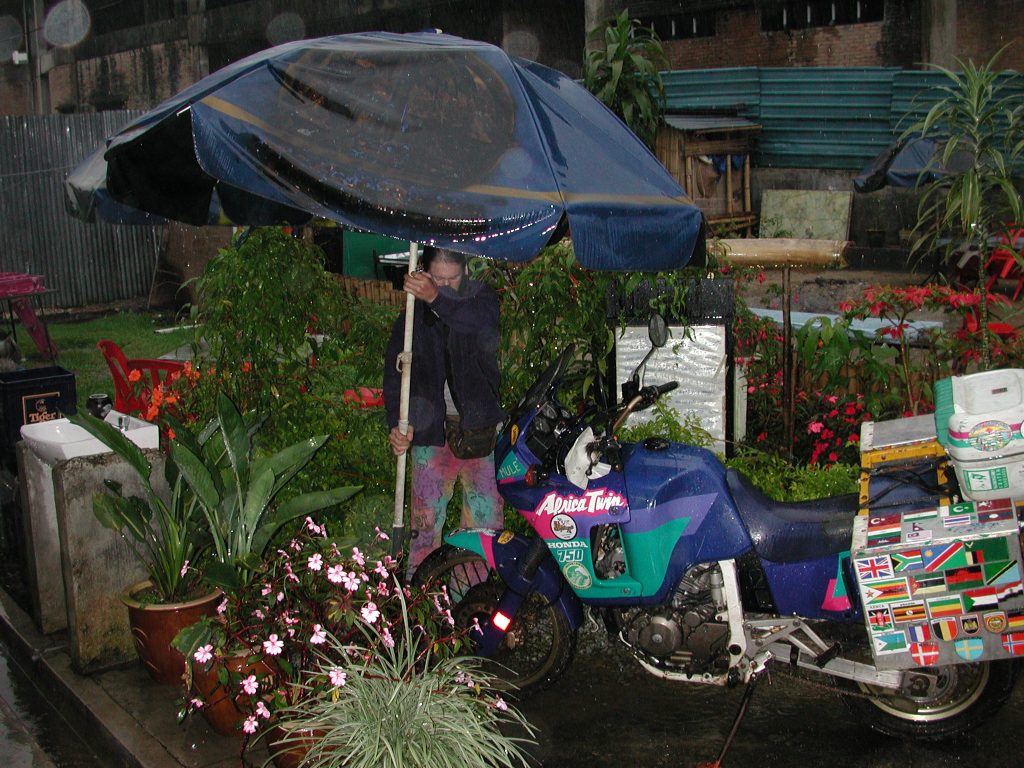 This is the monsoon season, so we were experiencing plenty of rain. Cuan trying to set up shelter so he can work on the bike. It failed. This is out the front on the Twin Pines Chalet. Sounds like a flash place, but it is very down to earth, and cheap at 18 ringuet a night. It was actually a very good place to stay. We really enjoyed ourselves there. Horst and Gernot arrived about two hours after us. We hadn’t seen them for the last month or so. 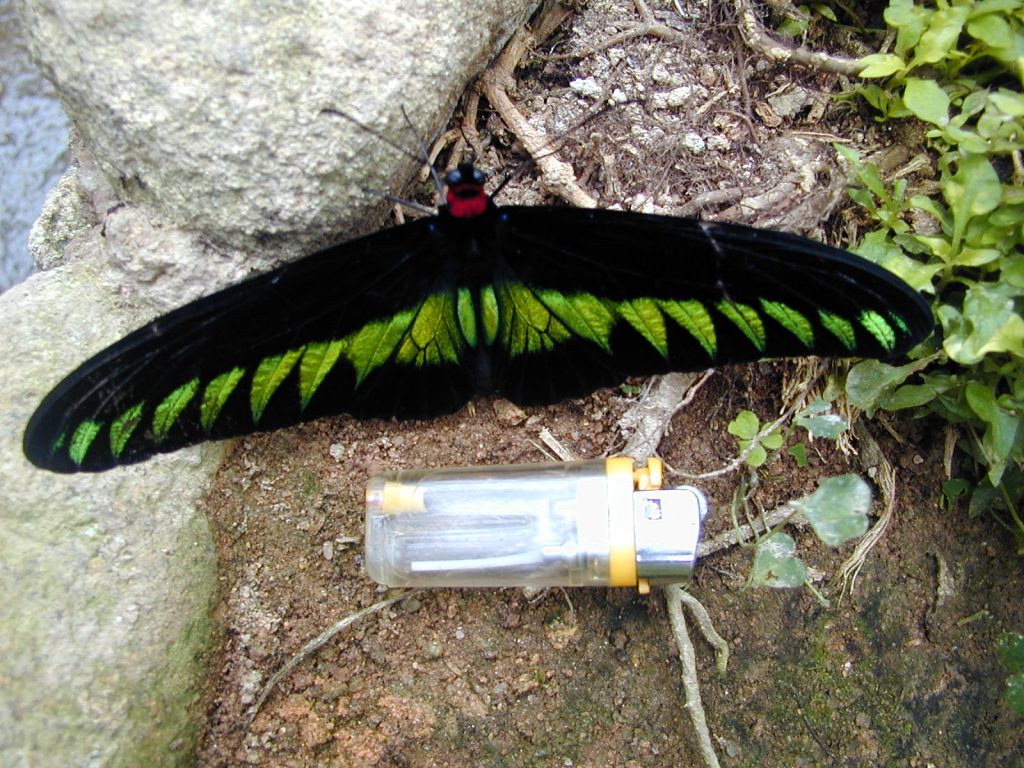 Some sort of bird-wing butterfly, but look at the size of it! Cigarette lighter for scale. 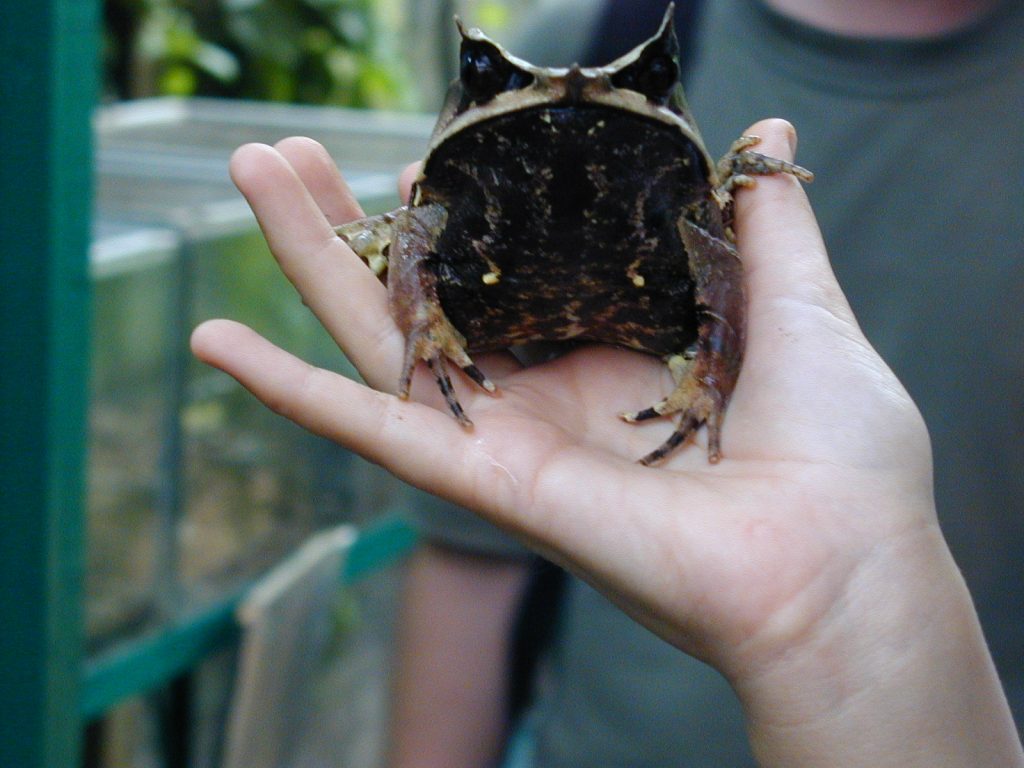 A leaf frog. These things are amazing to look at. Their camouflage is perfect.

Since the beer was so expensive, I gave the local rum a nudge. It was only 20 ringets a 750ml bottle, and bought myself the biggest hangover you can imagine. It was the first time I’ve been drunk since Turkey, and I seem to need to prove that I really am the idiot I some times appear to be.

Actually, to call it rum is a bit of an insult. In all of SE Asia, the spirits are mixed from ethyl alcohol, colours, flavours and water. It is not distilled. The only difference between vodka, scotch, gin and rum etc is the flavourings and colour. It should be easy to make at home. Ethyl alcohol is only 50 cents a litre, you can buy rum flavouring from food markets, some caramel colouring, 1.5 parts of water to 1 part alcohol (40%), and a 750ml bottle of home made rum will cost about 25 cents a bottle. Bargain! Guaranteed to produce hangovers to remember! 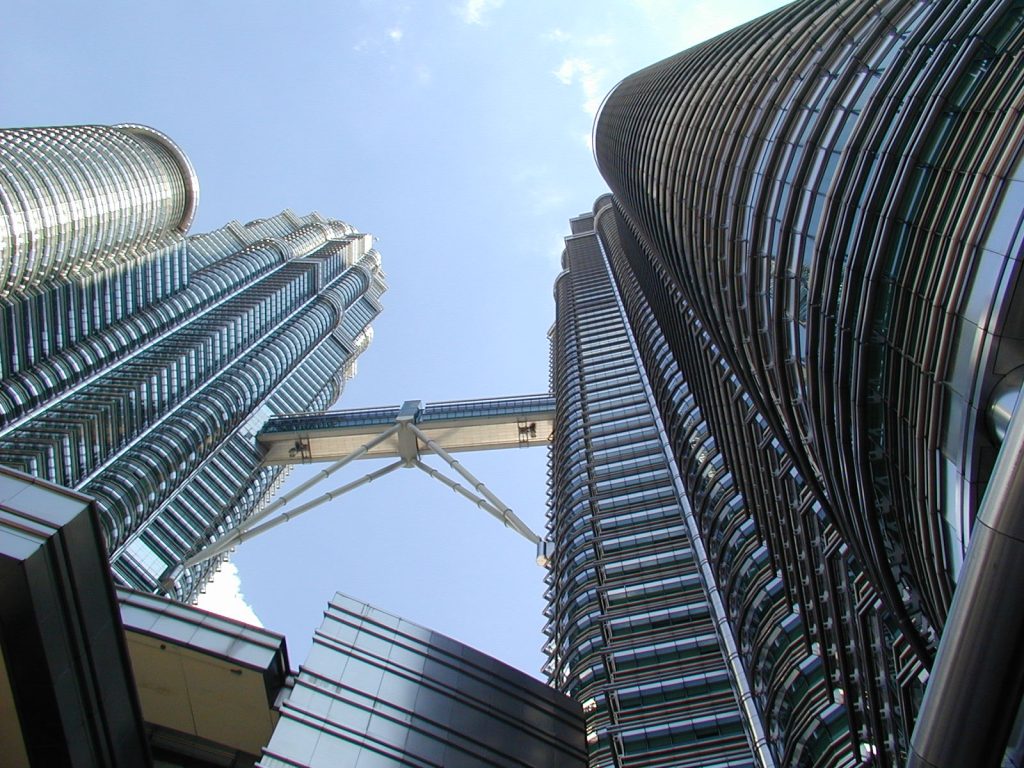 Until a few years ago, the tallest building in the world. The twin towers of Kuala Lumpur. It is completely lined in stainless steel. 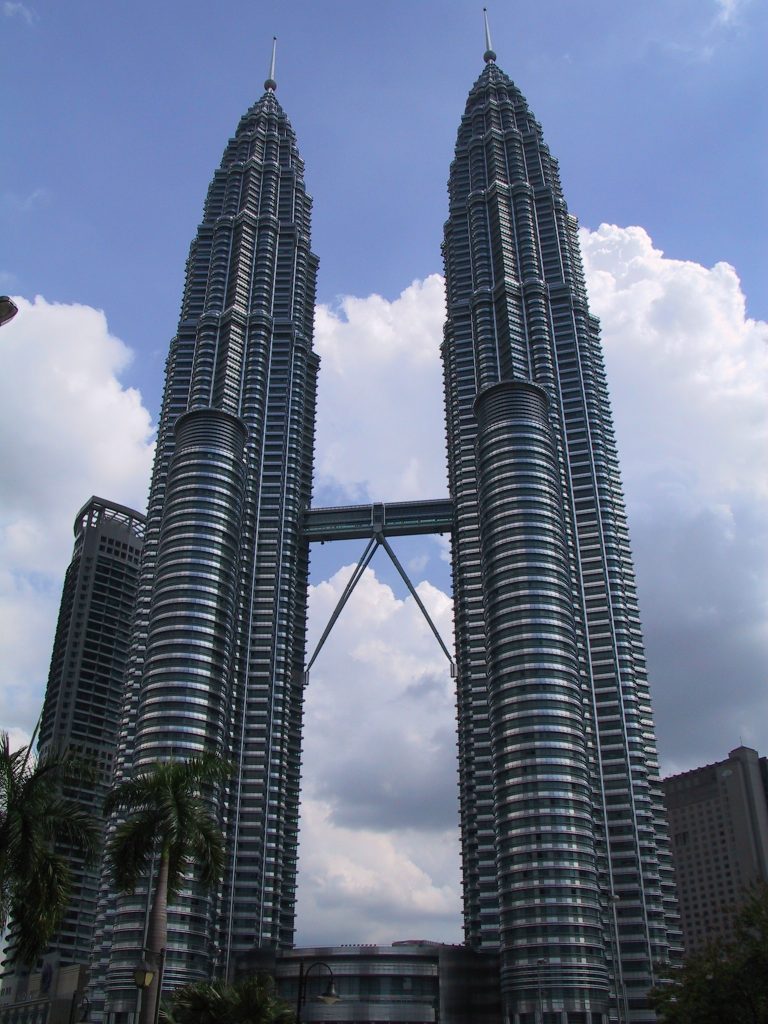 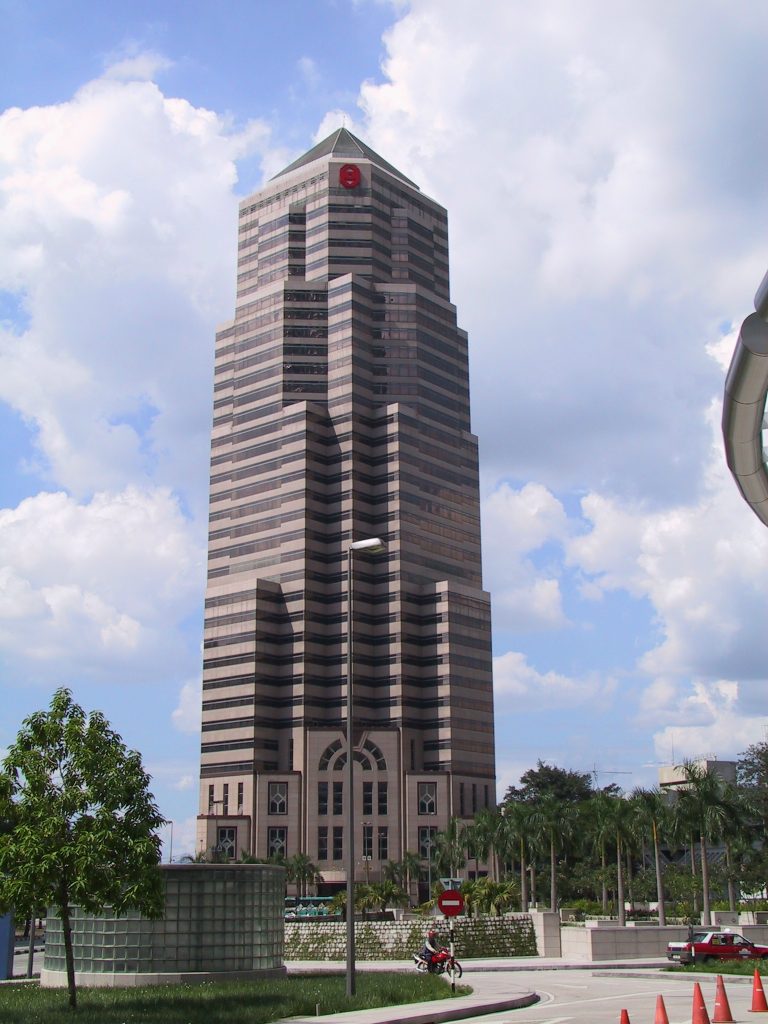 KL is famous for it’s architecture. This is just one of many other outstanding buildings. 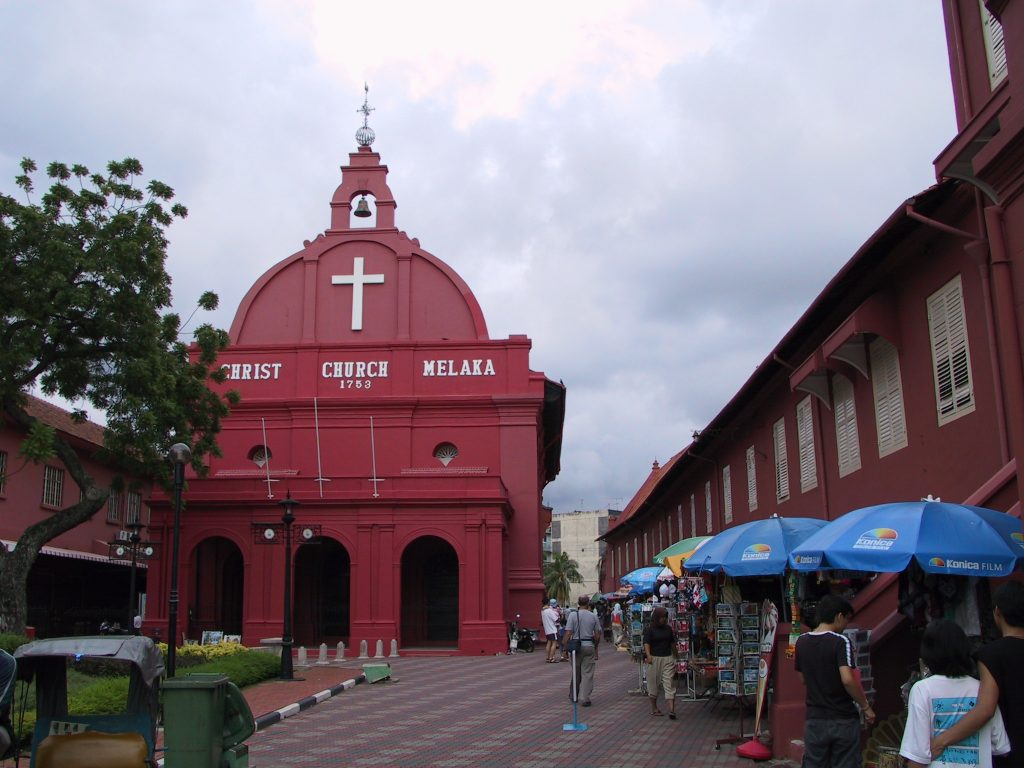 Our last stop in Malaysia was Melaka. Originally Portuguese, then Dutch then British port. It was a major port in it’s hey-day, but not much cargo goes from here anymore. It is a popular tourist destination, but I don’t know why. I didn’t find it particularly interesting at all. This shot is of an old Christian church. There are some old Dutch and Portuguese buildings, but not very many. 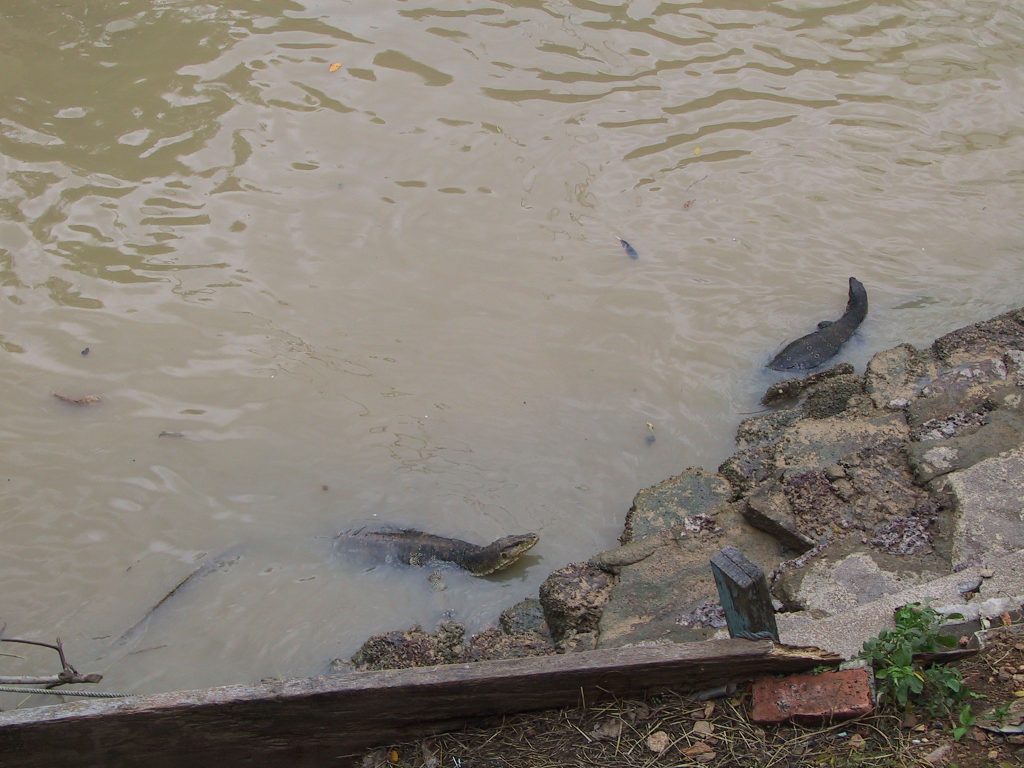 (31415 bytes) 20024. We spotted these monitor lizards in the creek. They are huge. Not as big as the Komodo dragon, but they must come close to being the second biggest in the world. 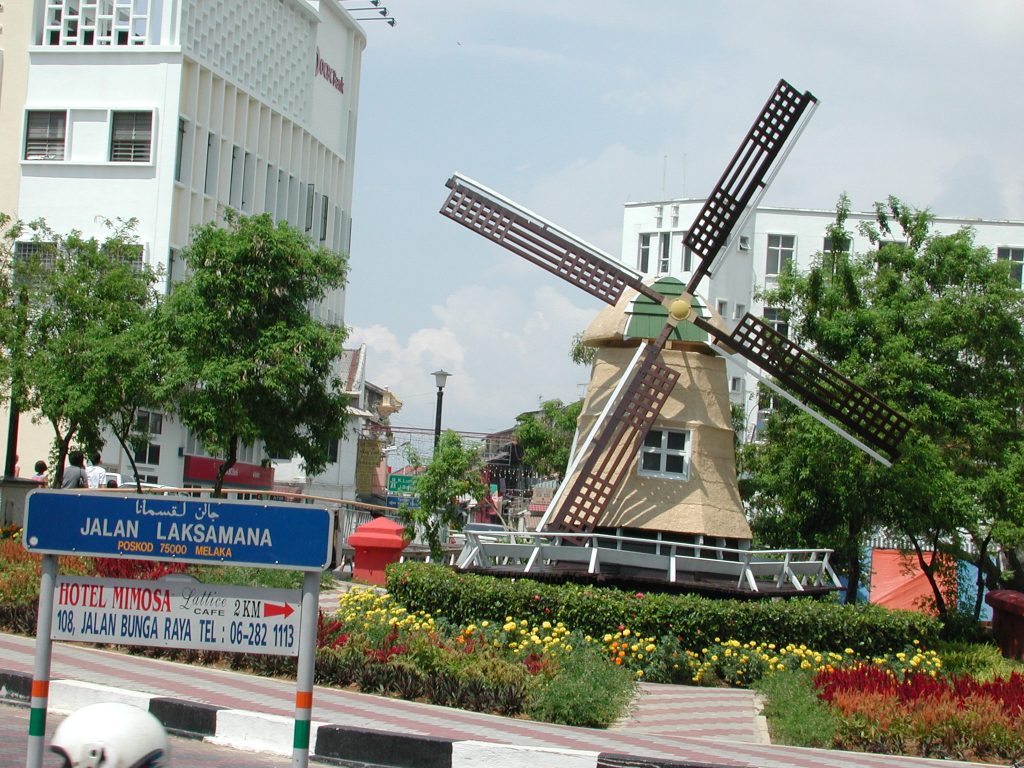 A not-so-old tribute to the Dutch influence locally. 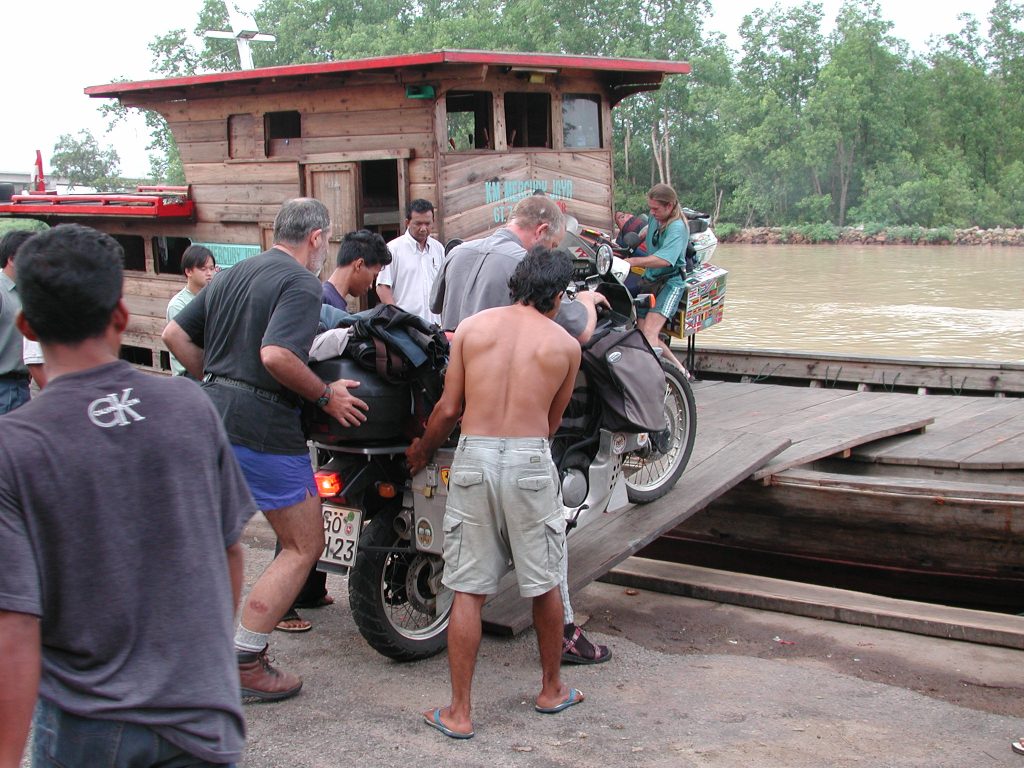 Loading our bikes for Indonesia. The biggest problem with getting a bike into Indonesia is just getting there. There is not a single car ferry or barge doing regular trips. We were told there was one in Penang (there isn’t). Someone assured us there was one in Melaka (there isn’t). There is no ferry service from Singapore to Indonesia. One way is to charter a boat, which is what we did. I cost us $370 for the boat, which only carried our bikes, no other cargo.
The other alternative is to crate it up and ship it as normal cargo. Crating is very expensive, and one biker reported that it cost US$220 to ship from Indonesia to Malaysia, so I guess it would be similar the other way. Considering it is only about 80klm, the price seems high. As I write this, I have just put my bike on a ship from Surabaya, Indonesia to Durban South Africa for US$270.