This country is where I expected a problem, but it turned out to be interesting and trouble free. I entered from Croatia, into the autonomous republic of Montenegro. I had no problems, no visa required. I don’t know if US or UK citizens would find it so easy. Montenegro was part of the Yugoslav federation, but it is now a fully fledged independent country in the EU. I doubt if I would have been able to get into Serbia though, and I didn’t try. I met two girls in Trogir, Croatia, one Australian, the other English. They told me they couldn’t get into Yugoslavia at all. They went to the Yugoslav embassy in Zagreb, and the official there was very rude, and told them to go back to their own country for a visa. He was apparently upset over the part our countries played in the then recent war. This sort of childishness seems to be common in this region. The girls are just individuals, with no political agenda, wanting to visit the country, not to mention spend money there. Why should it make any difference whether the visa is obtained there or at home?

Notice all the prices above are quoted in German DM (Deutsche Mark). This is because their own currency is so unstable. Since 1990, the Yugoslavs have dropped 10 zeros off the Dinar to cope with rampant inflation. I wonder what interest rates are like. I only stayed in Yugoslavia one night, though it would be easy to spend a lot more time here. many places are quite beautiful, and it is an inexpensive country. Edit: Now they use EURO’s

Cyrillic alphabet is common, in fact all street signs are Cyrillic only, but road signs are both Latin and Cyrillic script.

I had met an Australian at the Croatia/Montenegro border who was working in Kosovo. He invited me to drop in on them on my way through, so I was aiming for a town called Pec, then down to Decani, but I missed a turn. I realised my error about 40km later, and I found another sign for Pec, so I followed it. It went up a mountain, and after a few km, turned to a gravel road, which progressively got worse. This turned out to be a bit of an adventure! 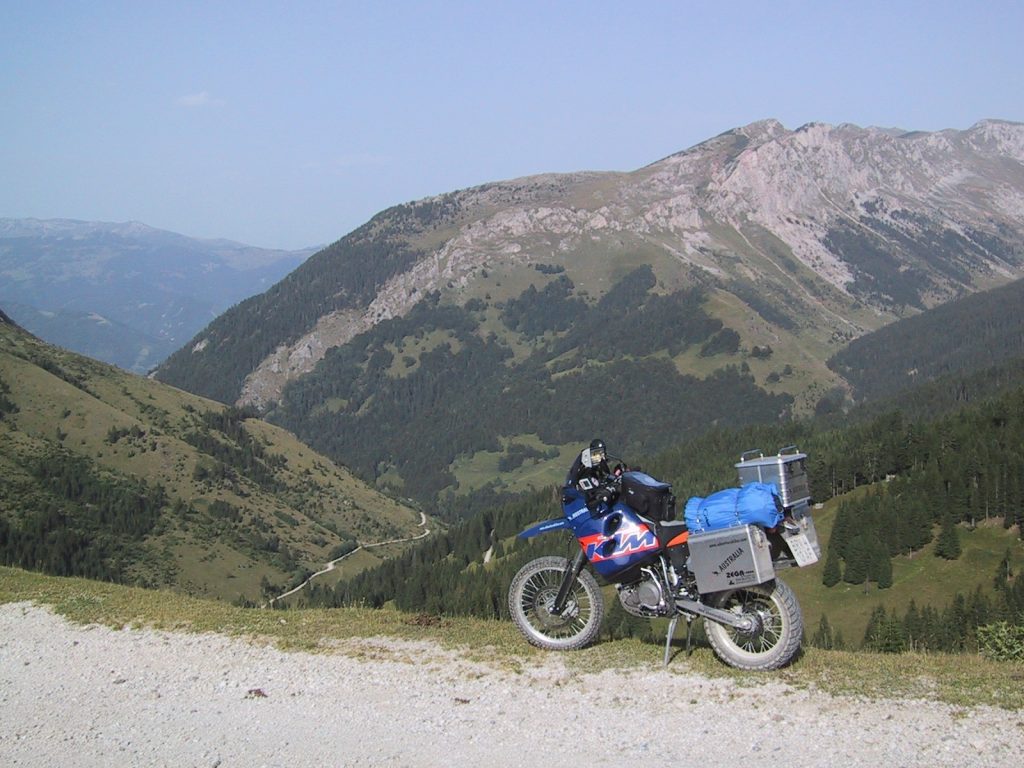 Crossing the mountains between Montenegro and Kosovo via the back road. Altitude 1930m, quite cool and spectacular views. On the way to the top, I was stopped by Kosovo peace keepers. They asked me where I was going, and they searched all my luggage, then let me through. These guys were fascinated by the bike, and where I was going. No doubt it is a mind numbing boring job sitting around all day. 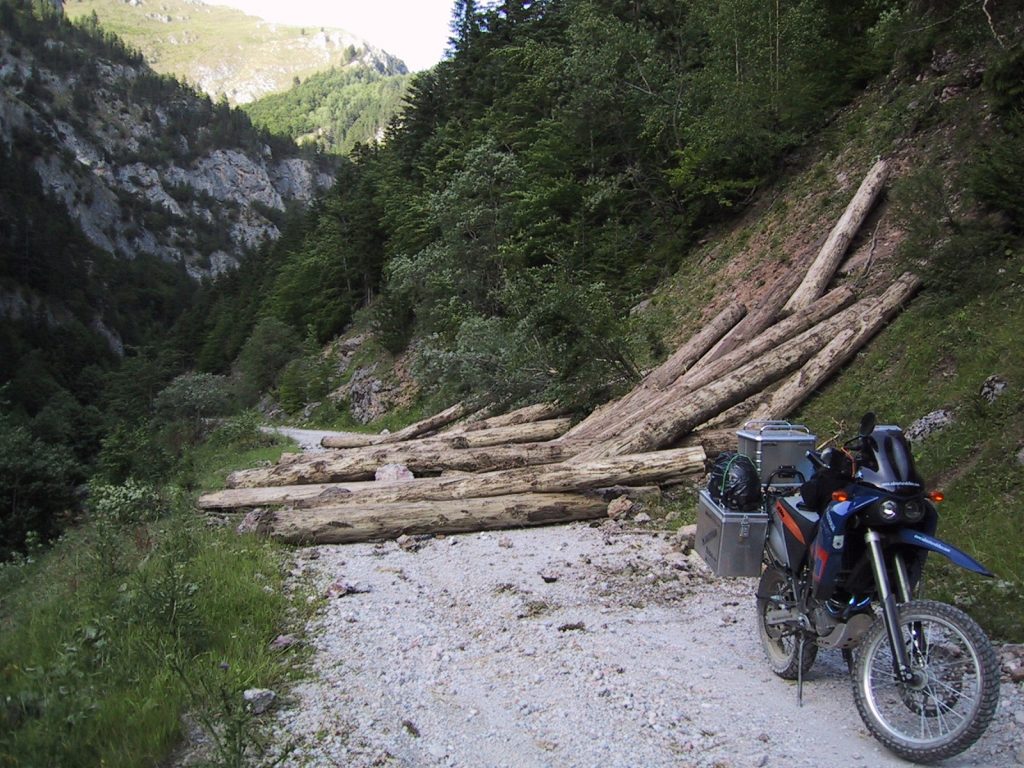 Problem number one. The road was blocked. I was trying to go the direction of the logs. It is not so obvious from the photo, but to the left of the logs, it drops down very steeply into a river. After some consideration, I unloaded the luggage, and made my way around with only 20cm of room. One slip, and I could never have retrieved the bike by myself. 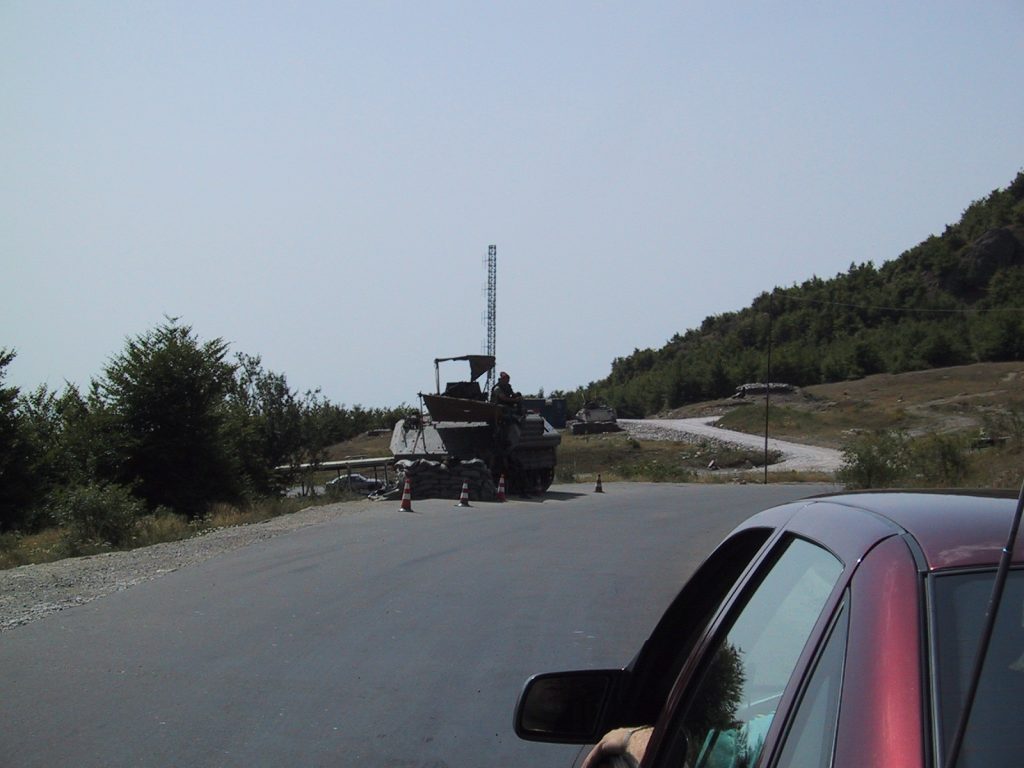 Italian peace keepers wouldn’t let me through to Pec. They claimed there were fires, but I was only 7km away, and I couldn’t see any smoke. I had to go back, past the logs again, and almost ran out of fuel. I went back to Montenegro, and stayed the night in a small village. I stayed in a room in someone’s house. Apparently that is a common way to make a bit of extra cash there. No hostels or hotels that I could see. In the morning for breakfast, my host asked me how many eggs. I said 2, but got three. Then she gave me a mug of what looked like sour milk. It had huge lumps in it. I’m guessing it is a local form of Yoghurt. It tasted OK, but the texture was off-putting. 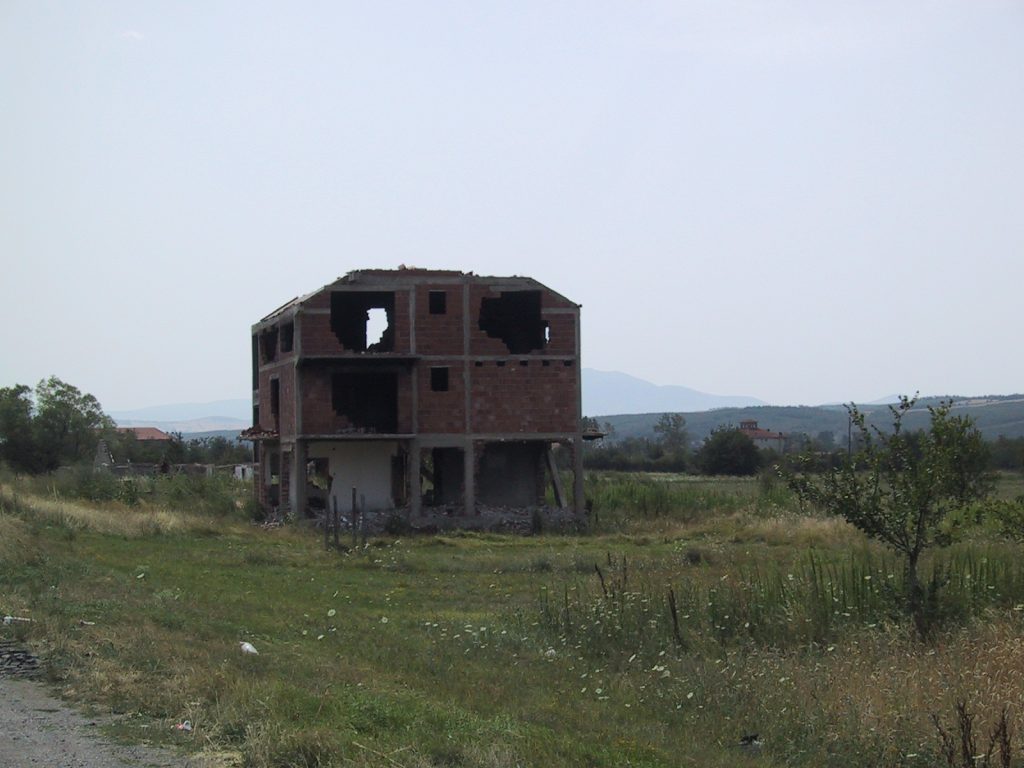 Destruction is wide-spread throughout Kosovo. Most houses that weren’t destroyed have signs of having been burnt. Blown up car, truck and bus bodies are all over the place, and there are plaques everywhere, presumably to commemorate those that died in the fighting.

There is a stark difference in the standard of living and services as soon as you enter Kosovo. It is no wonder they were seeking independence. I finally made it to Pec, but the traffic jams there were unbelievable. There is are so many support groups in Kosovo. Military vehicles everywhere, support group vehicles, semi-trailers carrying building materials, tradesman’s vans, and of course the locals all trying to get through these narrow roads. I gave up trying to find the road down to Decani, as both the bike and I were overheating in the slow going. Even on a motorcycle I had trouble getting through. Out side of town, there was another big traffic jam. I don’t know what the problem was, but the army were controlling the situation. There were vehicles lined up for at least 5km. I took to the dirt on the side of the highway, and made it to the front. Not long after, the military let us go. I was glad I wasn’t at the back of line.