Exchange Rate: 1USD = 8 Namibian Dollars
Fuel: 1 Litre = N$3.7 (97 octane)
Camping: N$25
Backpackers: – From N$30-N$55 for a dormitory, N$140 for a double room.
Road conditions: – Generally very good. Mostly sealed roads, but plenty of great dirt roads if you look.
Speed limits: – Mostly 120kph on the highways.
Border crossings: Several to South Africa, Botswana, but I doubt anyone could pass into Angola. No Visas required for most nationalities, and no carnet required as South Africa, Namibia and Botswana share customs, IE you only enter the bike at the first country, and exit at the last, in my case Botswana.
Food & Drink: – 1L Water N$5, 330ml Beer N$8, 330ml Pepsi N$3.50, Main Meal (steak and vegies) N$30

After my hold-up in Cape Town, I had to make a decision on where I could make up time. I could cut every country short by a few days, or I could basically just transit a few countries, so I could spend reasonable time in others. I decided that at some point, I will be back in South Africa, so I could cut my trip short in places like Namibia, Botswana and Zimbabwe, which all border SA. They are all easily accessible, as is Mozambique (which I didn’t plan to visit this time) from SA. I was further helped in my decision making by crazy Bob in Zimbabwe, who is throwing all the whites out of the country, and supporting violence against them. Their economy is in tatters at the moment, and all aid has been withdrawn. The system is grinding to a halt, and as I write, there is no fuel available in the country. That meant I would have to avoid it. As a result, the next few stories are going to be very brief.

Namibia was a part of South Africa until it gained its independence in 1990. The culture, the food, the prices are all very similar to SA. In fact the Namibian dollar is tied to the SA Rand at parity. IE one Namibian dollar = one SA Rand. Namibia had once been a German colony, and that is evident in the architecture in several places. German is widely spoken, as is Afrikaans and English.

My first stop in Namibia was Ai-Ais. It is known for it’s hot springs, which people pay to wade in, in spite of it being hotter than Hades outside. This place was hotter than anywhere I have been in Africa so far. The flies are annoying, and they charge about double a backpacker dorm room just to camp. I was unimpressed. 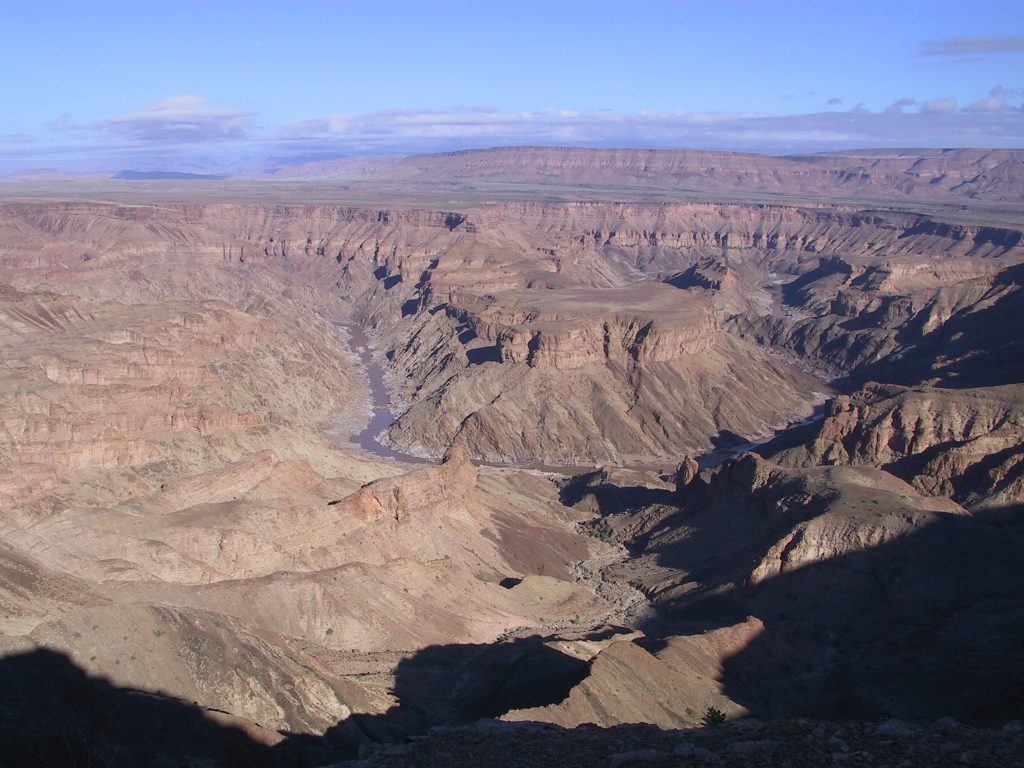 After the disappointment of Ai-Ais, first thing next morning, I headed for Fish River Canyon. This is Africa’s version of the Grand Canyon. 160km long, up to 27km wide and 550m deep. This is an impressive spectacle, but definitely junior to it’s US brother. 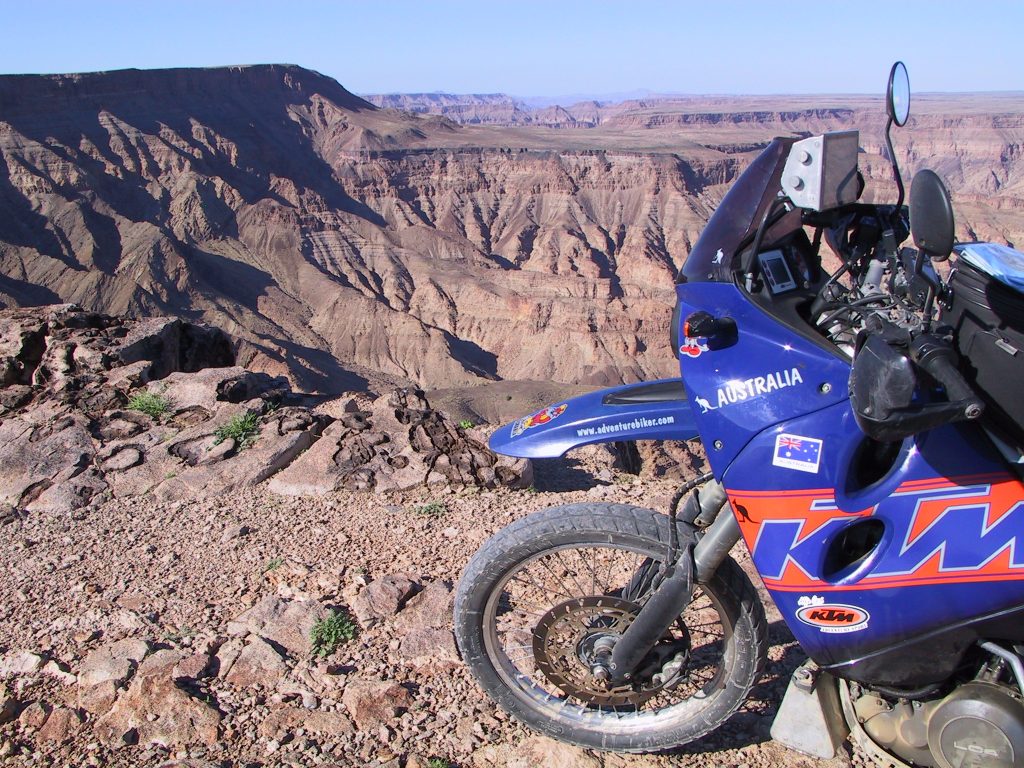 I just had to get the bike into the photo somehow. It is still going great. 40,000km up now, and no failures. 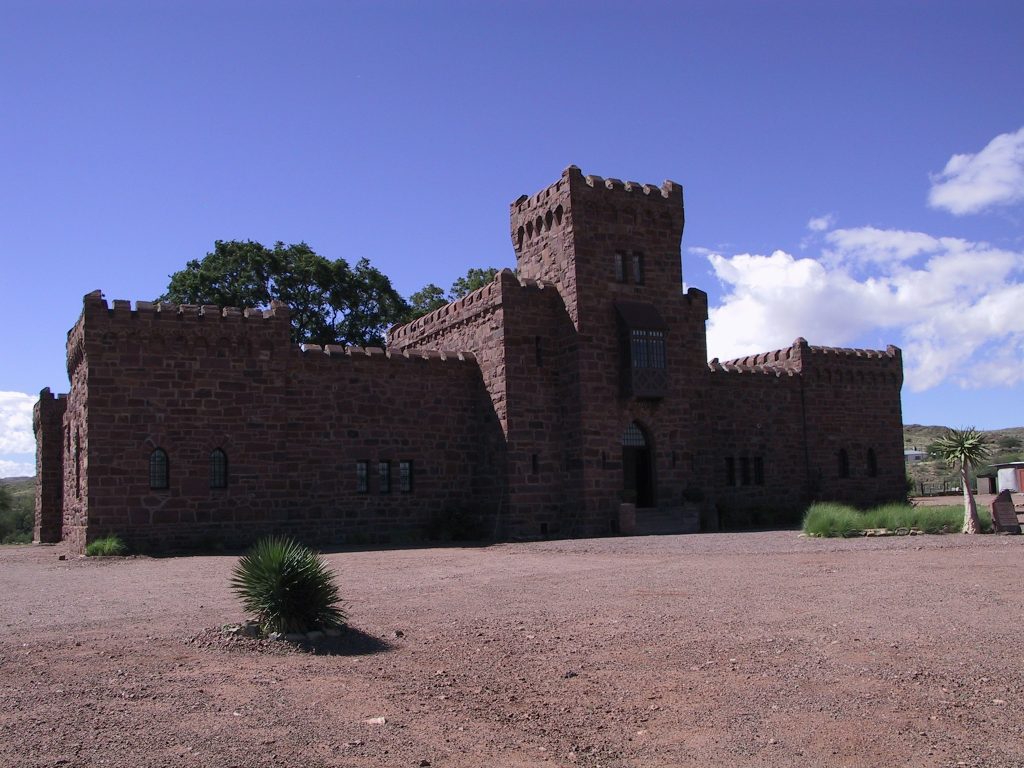 The totally out-of-place Duwisib Castle, sort of on the way from Fish River Canyon to Windhoek, but a long way from anywhere. It was built by a German ex-army officer and his rich America heiress wife, early in the 20th century. He was breeding cattle and horses from English and Australian stock. In 1914, he and his wife sailed for London to buy more breeding stock. On route, war was declared and their ship had to put in at Brazil. They were interned there for a while, but after being released he went straight back to Germany to join the war effort. He lasted exactly 2 weeks before getting killed in the Somme. His wife never came back to the castle, and the government took it over eventually. It has recently been restored. 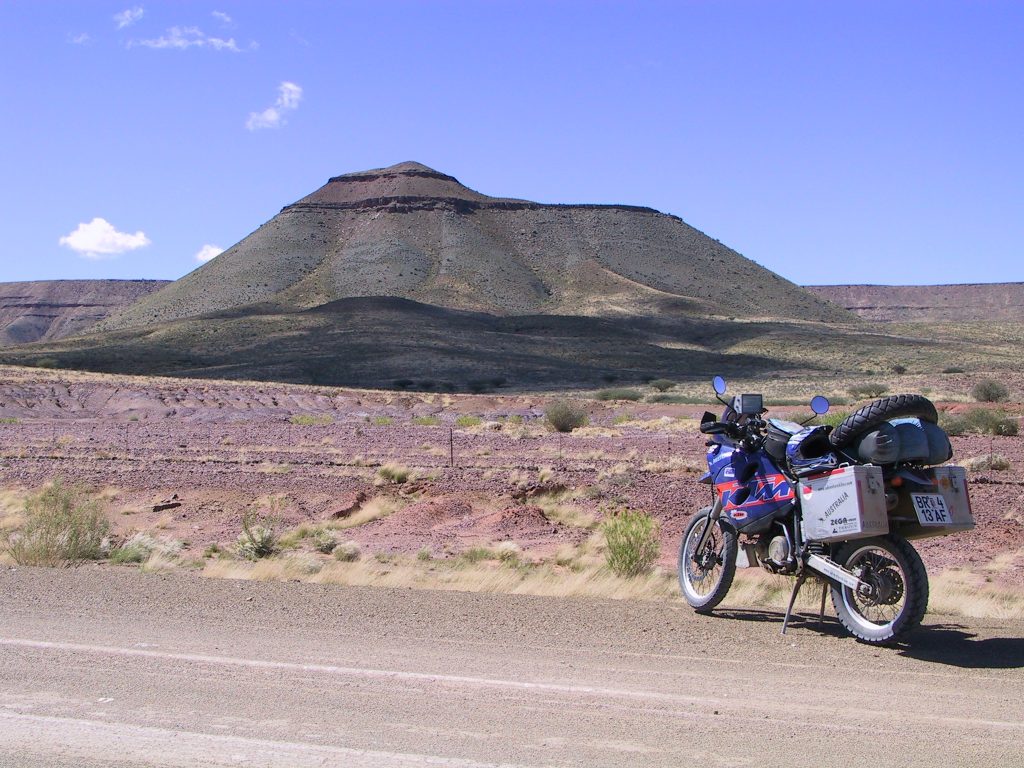 Typical barren landscapes of the Namib desert. I did about 800km getting from Ai-Ais to Windhoek, and half of that dirt in one day. When I arrived at the backpackers, they asked me where I came from. They wouldn’t believe I had come that far over those roads. In fact, most of the dirt roads were very fast except for the frequent muddy water crossings but one road in particular was closed due to rain damage. I went around the barriers anyhow, because I would have had to backtrack too far. I had to cross a sandy bottom river, water depth about 600mm which wasn’t difficult. Being a closed road, if I had a problem, help would be a long time off.

Windhoek (meaning windy corner, except it is rarely windy here I’m told???) is a mildly interesting city. One day should see most of the sights, but is also the last place for me to get tyres and parts before Dar es Salaam in Tanzania. I bought a new front tyre here. I probably could have got a lot more life out of my existing tyre, but after about 400km on rain drenched dirt roads getting here and I a few unwanted adrenaline rushes trying to wash off speed on a tyre with no tread, I decided to take the safe option.

My track from Windhoek to Maun, Botswana took me through the edge of the Kalahari desert according to my map, but I was disappointed in what I saw. The real starkness of the Kalahari is obviously further south.

A pretty pathetic report for a country that is reputedly an offroaders dream come true if I do say so myself. This place has a lot more to offer than I got the opportunity to see. Etosha National Park, the Skeleton Coast and it’s sand dunes, the Kalahari, The Caprivi strip etc. It just means I have to come back again one day.