Exchange Rate: 1USD = 888 Tanzanian Shillings (TS)
Fuel: 1 Litre = TS540-600 (Super, unknown octane)
Camping: US$2
Backpackers: – US$5 for a dormitory, US$15 for a double room.
Road conditions: – The highway from Malawi through to Kenya is great, the rest of the country is rough unsealed roads
Speed limits: – 80kph on the highways, 50 kph in villages. Speed traps common.
Border crossings: Lots, and slow. They have this this called division of labour. It can take three people to fill one form. Definitely run on Africa time here. Insurance mandatory US$10. You may travel between Tanzania, Kenya and Uganda multiple times on a single entry visa.
Food & Drink: – 1.5L Water TS2000, 500ml Beer TS1000, 330ml Pepsi TS300, Main Meal (meat and vegies) TS4000

My stay in Tanzania was limited to Dar al-Salaam, the Island of Zanzibar, and Arusha. The main highlights are Kilimanjaro, the highest free standing mountain in the world, Serengeti national park, Ngorongoro crater and Zanzibar. Dar al-Salaam is just another big African city, full of hustlers, but the port to access Zanzibar.

I had stayed my last night in Malawi at Karonga, about 170klm from the Tanzanian border. There wasn’t much of interest on the way to Dar al-Salaam (the capital of Tanzania), so I decided to have a go at making there by nightfall. It is about 1200klm, but possible if all goes to plan. Of course, nothing does go completely to plan. Firstly, although it didn’t cost me too much time, I came to the Malawi border post where I was directed to park the bike. I put the bike on the centre stand, took off my gloves, goggles, glasses, helmet, ear plugs, and backpack to get out all my documentation. The border official says ‘can I help you?’. I said ‘I would like to exit Malawi’ (why do you think I’m at a border post for you idiot, I thought). He said ‘we have moved the border post 20klm down the road, you have to go there’. ‘So why was I directed to stop here?’ ‘We wanted to tell you we moved the border post!’ ‘Don’t you think you could have told me that 5 minutes ago before I started disrobing?’ ….Silence. Probably 10 minutes down the drain here.

The next border post was thankfully simple and fast, but I can’t say the same for Tanzania. It was the 1st of May. International workers day. I couldn’t believe how slow the Tanzanians moved. Filling out the forms was shared between three people. One writes up the form, one word at a time, while carrying on a conversation with the man with the stamps, and eventually passes it on to the stamper who in turn places several stamps on the document, one at a time, in between carrying on a conversation the form filler. I am then given the forms and told to stand in line to the cashier. Some minutes later, after several others had intermittently passed through the cashiers desk as she carried on a conversation with the form filler and the stamper, I was finally told that I didn’t have to pay any road tax because I had a motorcycle. Next I had to get insurance, which took the labours of two men to fill out the forms, then off to customs to have the carnet filled out, by a further three people. I don’t know how long I spent there, but I figured that it was a sign of things to come as I head north, no doubt culminating in the legendary Egyptian bureaurocracy.

Fortunately, the rest of the day was relatively trouble free. The first few hundred kilometres of Tanzania wind around some lush fertile mountains. Rain was all round, but somehow I managed to avoid the actual downfalls. It really was beautiful and interesting looking at the cultivated hills, and I was relieved to see a real variety of fruit and vegetables being grown. Apart from South Africa and Namibia, the range has been really poor. The locals live on a diet of mostly maize, potatoes and bananas. It was hard to get a meal without fried potato chips. Here they were growing most of the common western vegetables and fruits, and in commercial quantities. The quality in the markets was excellent, unlike some of the really motley looking stuff in the Malawi markets. I had stopped at an intersection trying to figure out which way to go and I was rushed by peddlers trying to sell me cabbages, bunches of carrots, sacks of potatoes and nuts, including CASHEWS. I love cashews.

After a few hundred kilometres, the elevation dropped from about 2000m to 1200m, and the countryside dried out dramatically. Not desert, but not too fertile, and not so many people. The quality of the road surprised me. Sealed, wide, and reasonably safe. I was getting along at about 120km/h most of the way. I found out later that the speed limit is 80km/h, and they enforce it with a 20,000 shilling fine. I saw heaps of police checkpoints, and was stopped at several. They all only wanted to say hello, and after a while, I gave up stopping. When they waved me down, I waved back at them and kept going. The police stops are every 100km or so. It gets a bit ridiculous after a while. 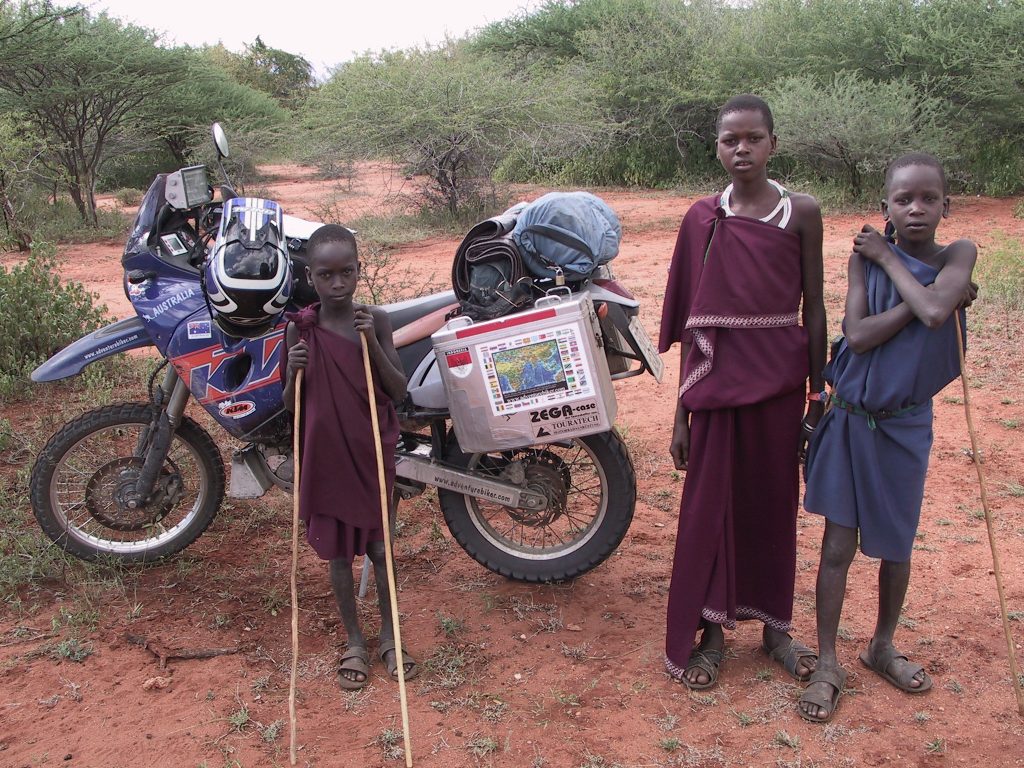 On my way to Dar, it was about midday, and I had already covered 550klm from Malawi. I was getting really tired, so I pulled up to what looked like an isolated spot to rest. These Masai kids strolled out of the bush. It seems that every bit of the country is populated. Although I didn’t really rest, the stop rejuvenated me, and I was able to continue on towards Dar. It was another big day. About 1100klm, and I didn’t quite make Dar, staying at a pleasant town called Morogoro, popular for hiking to the nearby mountains. 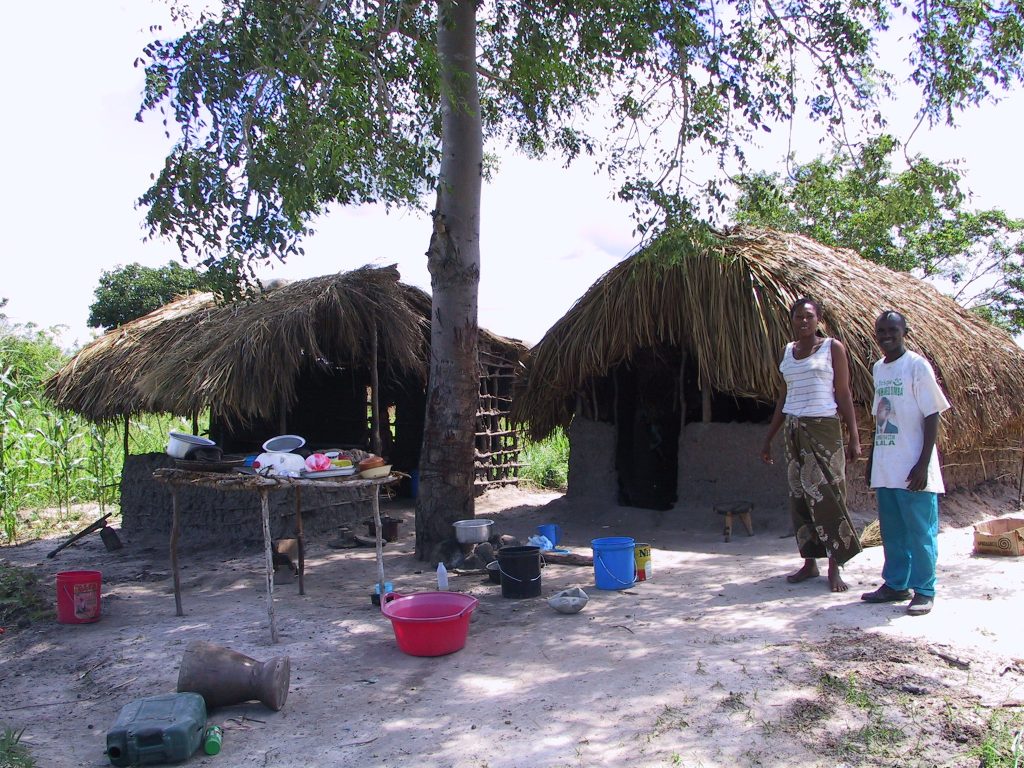 Next morning, only about 120km to Dar, I pulled up on the side of the road to have breakfast (a bag of cashews I bought at a petrol station), and out of the bush walked a local. The grass beside the road was so tall, I couldn’t see that I had parked right out the front of a village. I shared my cashews with him, then he invited me back to his place for tea and I met his wife and son. Their tea is made from unprocessed milk and some sort of flavouring that I couldn’t identify. I tried to find out what it was, but we couldn’t communicate well enough. 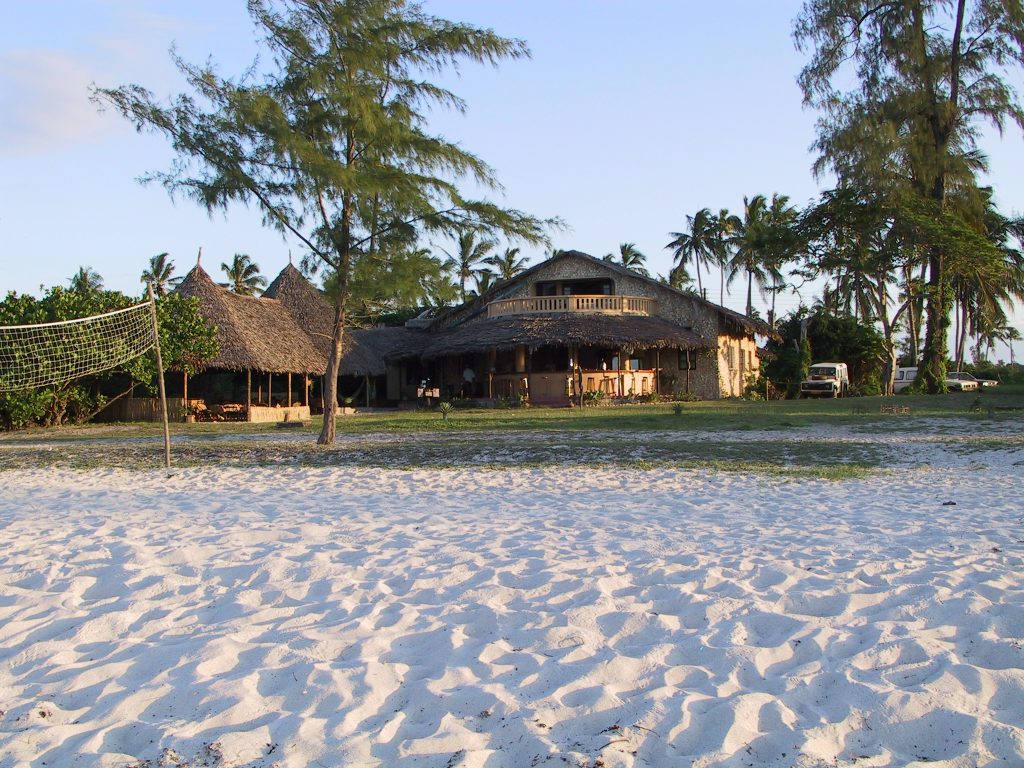 Dar al-Salam is not so nice a place to stay, however I found a really great place to relax and safe parking for the bike. It is a 10 minute ferry ride to Kigamboni and 8klm along the shore on the left to a place called Kipepco camp. The beach is very clean white sand. I did several long walks from one end to the other. The water is clean and warm. Great for swimming. Adrian and Heidi are the hosts. They looked after the bike while I went to Zanzibar.
Every morning the fishermen ply the waters in front of the camp. They use nets and lines mostly, but they also use dynamite, which is having a catastrophic effect on the coral and fish stocks, not to mention serious erosion on the beaches from the destroyed reefs. Short sighted fishermen and an apathetic government means the practice will continue for some time yet. 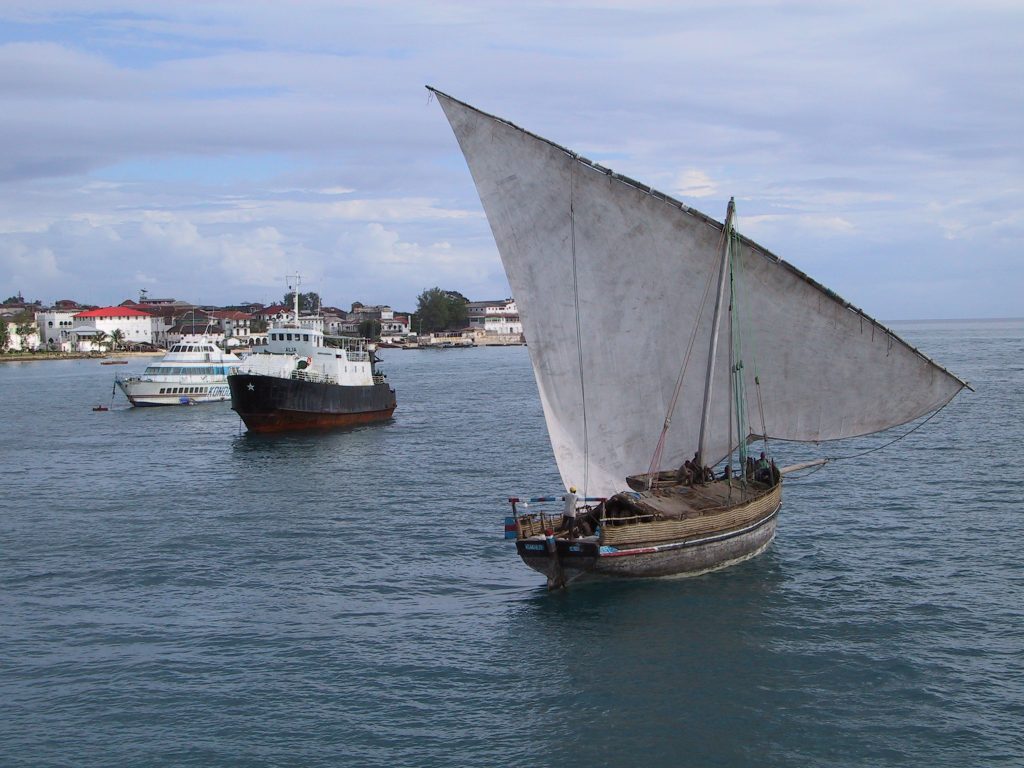 The other noticeable thing about Tanzania is the large number of Muslims (40%), after an almost totally Christian Malawi. The Arabs have been trading and settling in the area for centuries, and Arab influenced dhows like this one are common. This is actually Zanzibar. Stone City in the background.

Another photo of the beach front of Zanzibar town. It was hot during the day, but pleasant at night. The absolute highlight for me was the barbeque food market they hold on the beachfront every night. They are for the locals, but it is a big hit with the tourists. They have fresh tuna, octopus, squid, meat shish, salads, fried potato chips of course, chapattis, and heaps more. For less than US$2, I had a huge meal. This was still one of my most memorable meals ever. 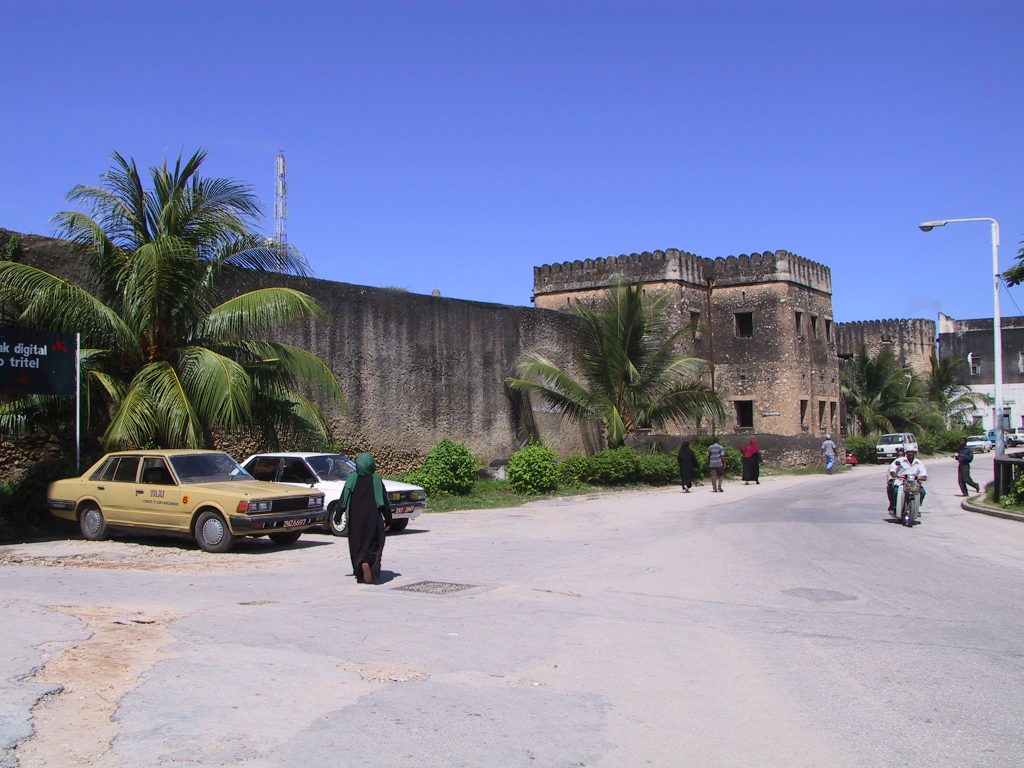 The Old Fort dates from about 1700. It was built by the Arabs as a defence against the Portuguese. The architecture of Stone Town is a mix of Arab, European, Indian and African. The streets wind around to no apparent order. Almost no straight roads. Navigating is extremely difficult. It reminded me of Fez (Morocco). Unfortunately, much of the buildings are decaying. 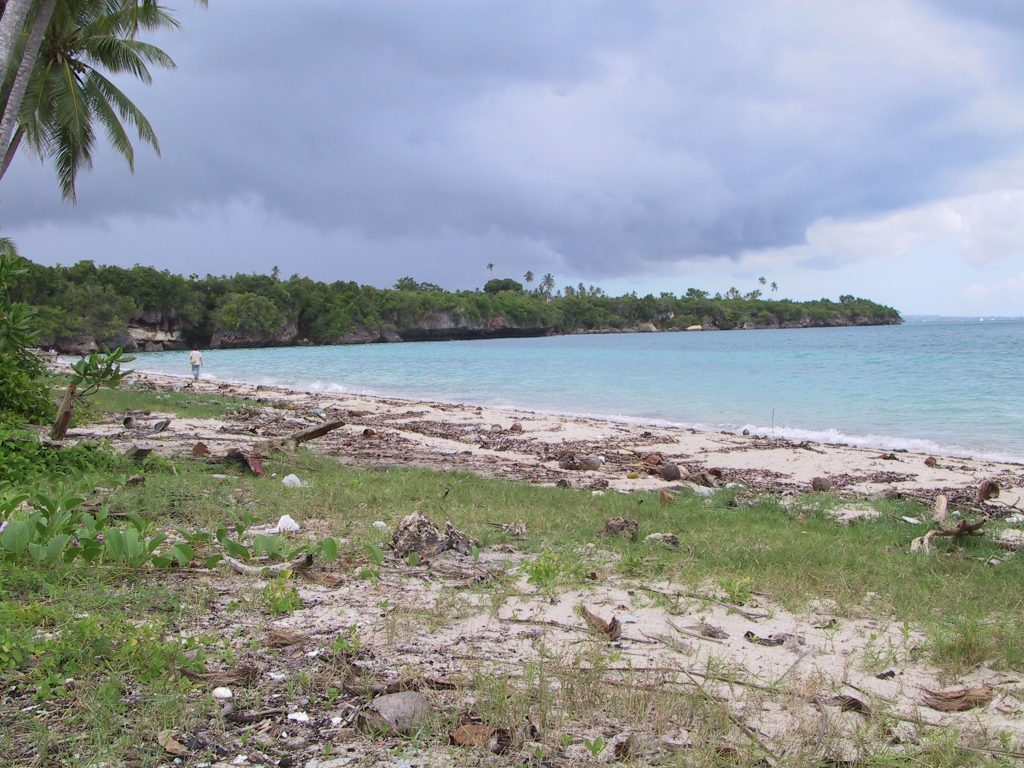 For me, the biggest attractions here are the beaches, and the spice tours. Zanzibar grows an incredible number of spices, but is facing a lot of competition from countries like Indonesia. I did a spice tour, and it is fascinating to see how spices like cinnamon, nutmeg, mace, saffron, ginger, pepper and most importantly, cloves grow. Tourism has suffered because of unrest here. Zanzibar is trying to gain independence from Tanzania, and even insist on stamping your passport in and out of the island.

The next major attraction is Kilimanjaro. I had heard that it is a really stunning sight to see, but thanks to the wet season, all I saw was clouds. I had one brief glimpse of a snow capped peak, but that was it. Coming from Dar, I was absolutely saturated wet. I didn’t put my wet weather gear on, because it was too hot, but after a few hundred kilometres of riding in really heavy rain, I regretted my decision. Putting on the wet weather gear now would do nothing but pickle me in my own juices. I stayed the night in Arusha, the setting off point for Serengeti national park and the Ngorongoro crater. I had already decided to skip both because of my number one hassle on this trip so far, visas. I still don’t have my Sudan or Ethiopia visa. Nairobi is supposed to be the place to get them. I didn’t feel too bad about missing the Serengeti because I was planning to go to the Masai Mara reserve, which is actually physically the northern part of the Serengeti, where the annual spectacular migration occurs from the Serengeti to the Masai Mara. I feel I didn’t really miss too much in Tanzania. I’d like to come back to Zanzibar and Pemba islands one day, but not on my own.