Exchange Rate: 1USD = 1750 Ugandan Shillings (US)
Fuel: 1 Litre = US1450 (Super, unknown octane)
Camping: US2500
Backpackers: – From US5000
Road conditions: – Kenyan border to Kabale very good, dirt after that. The dirt roads are treacherous when wet, but dry out quickly.
Speed limits: – 30-50 in Villages, 80-100 on the highways. Mostly signed.
Border crossings: Several to DRC (Congo), Tanzania, Burwundi, Rwanda and Sudan, but I doubt anyone could pass into Sudan. Visa available at the border. Insurance mandatory US$10, plus a $20 road permit required, but only if you plan to stay more than a week. You may travel between Tanzania, Kenya and Uganda multiple times on a single entry visa.
Food & Drink: – 1L Water US2000, 500ml Beer US1500, 330ml Pepsi US600, Main Meal (meat and vegies) US4000

The mention of Uganda brings up memories of that lunatic murderous dictator Idi Amin of the 70’sand 80’s. Amin seems to have a disciple in Robert Mugabe, who is emulating some on Amin’s antics to destroy Zimbabwe. Foreign companies were nationalised, and Whites and Asians were expelled, and the economy collapsed. Over 300,000 Ugandans lost their lives due to Amin. Uganda faced financial collapse, but was rescued by Colonel Gadaffi of Libya, since Amin had recently converted to become a Muslim. Uganda is still virtually a dictatorship, however the recently re-elected leader, Museveni appears to be doing a good job, and has good support.

Since Amin’s overthrow (by guerrilla leader Museveni), Uganda has returned to being one of the most peaceful and beautiful countries in Africa. It is vying with South Africa as my favourite African country. The people are mostly gentle and honest. It is one of the safest countries to visit, both from physical assaults and theft. It is mostly rolling green hills at about 1200m altitude. The temperature is mild all year round, though it can get quite cool in the mountains close to the Congo.

The notable attractions here are the source of the White Nile, The Mountain Gorillas at the other end of the country, some game parks (though they still haven’t recovered from almost total annihilation of the animals under Idi Amin), Climbing Mt Elgon, and the Chimpanzees of Fort Portal. 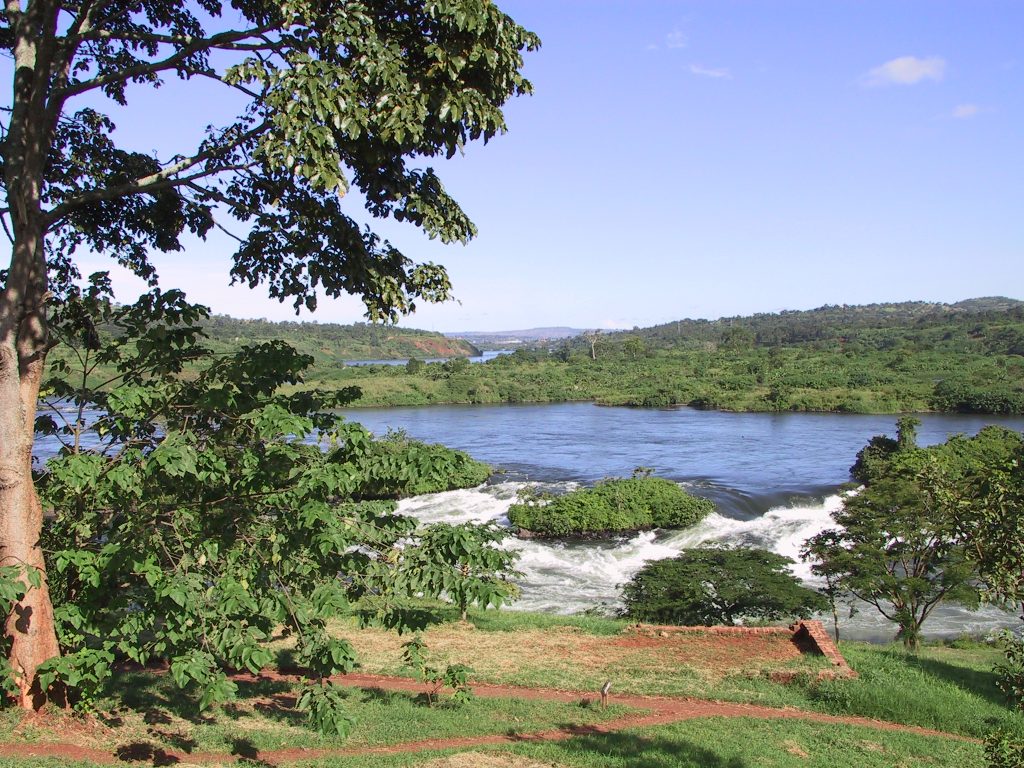 The White Nile above, which merges with the Blue Nile in Khartoum, Sudan, 1700 km away, before finally entering the Mediterranean in Egypt 3500km away. One of the worlds biggest river systems. This photo is of Bujagali falls, about 8 km from the actual source at Lake Victoria. 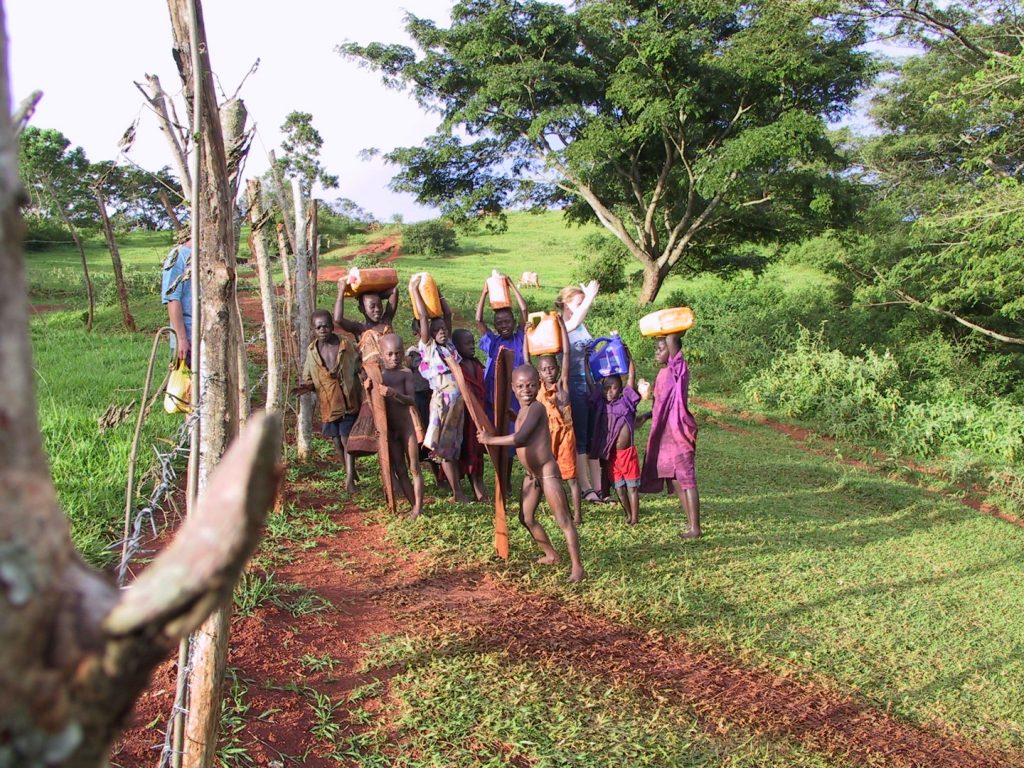 Local children at Bujagali Falls having fun sliding down the banks of the river on dried banana ‘bark’.

Ye-ha, away he goes. These kids have no toys, other than what they make for themselves from soft-drink cans, wire, old bicycle tyres, rims, etc. They never look bored. More than can be said for most western kids. 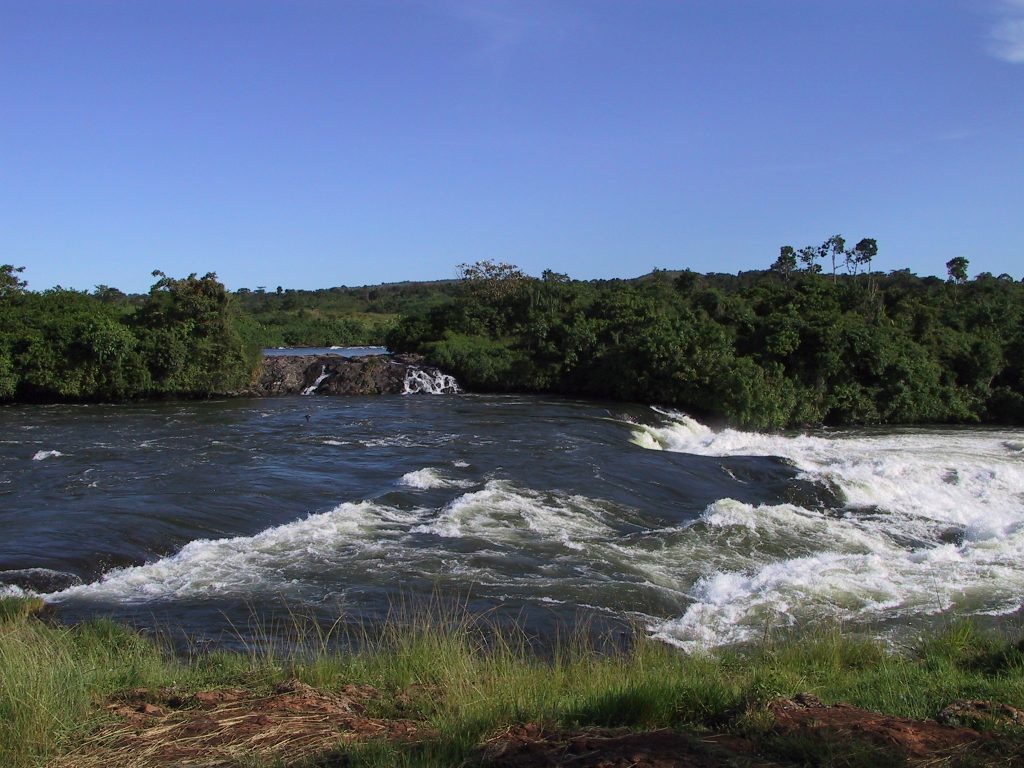 Bujagali falls has some of the best white water rafting in the world, with up to category 6 rapids (but commercial operators only do up to category 5). Unfortunately, there are plans to build another hydro dam below these falls, so they will disappear in the near future. I was really struck by the beauty of the place. I had planned to stay in Kampala, but decided to stay here a few days. 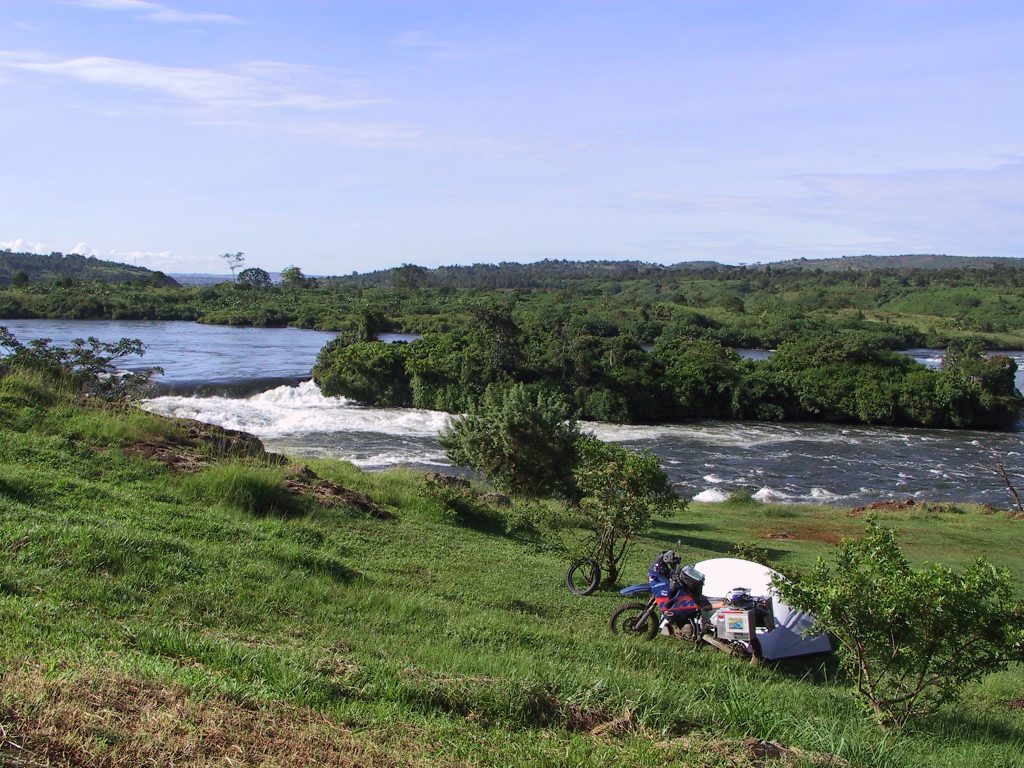 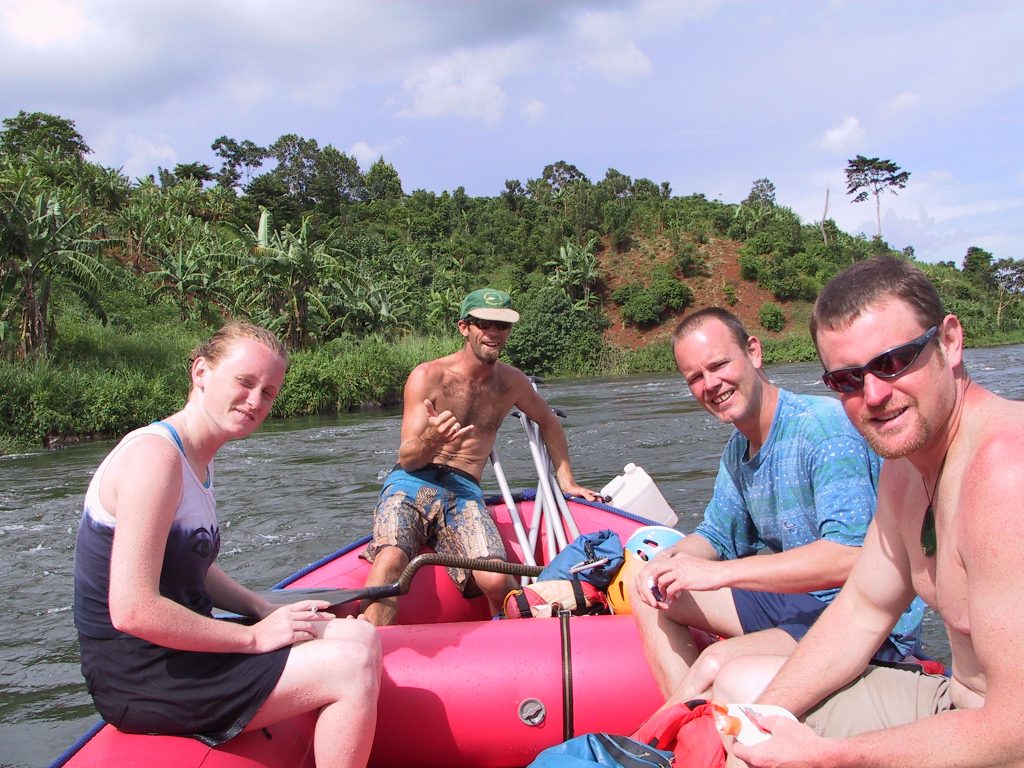 Part of my group. We were thrown out at least 6 times, despite our best efforts to stay upright. The last category five was a bit scary. We flipped on the first of 5 waves, and were swept 180m before we got out of the boiling water. You can’t see, you can’t breathe, but we survived. Fellow Aussie Adam on the left hit a rock and gashed his leg a little. 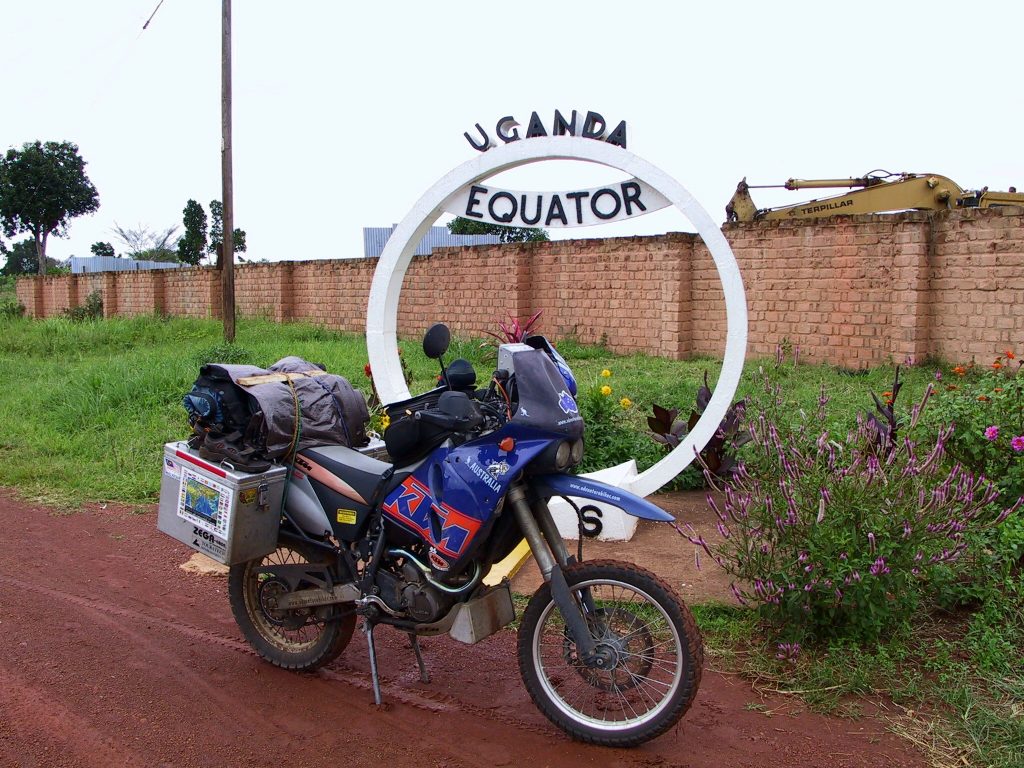 This was my third time over the equator in Africa. I will cross it 5 times in total, twice in Uganda, and three times in Kenya. 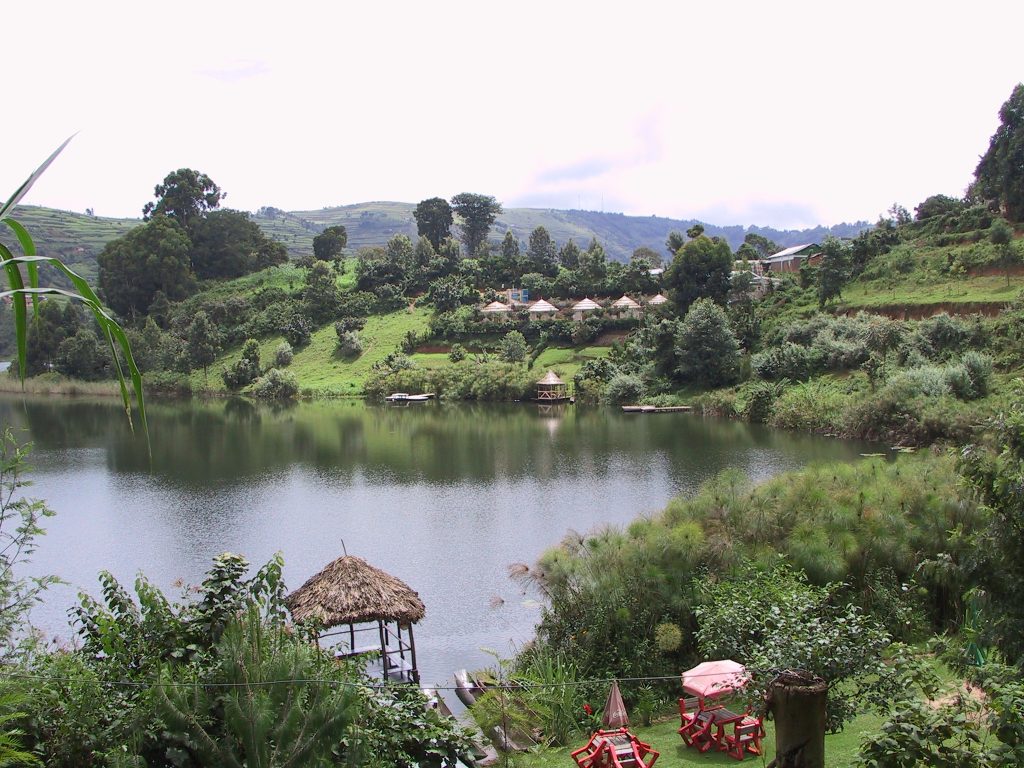 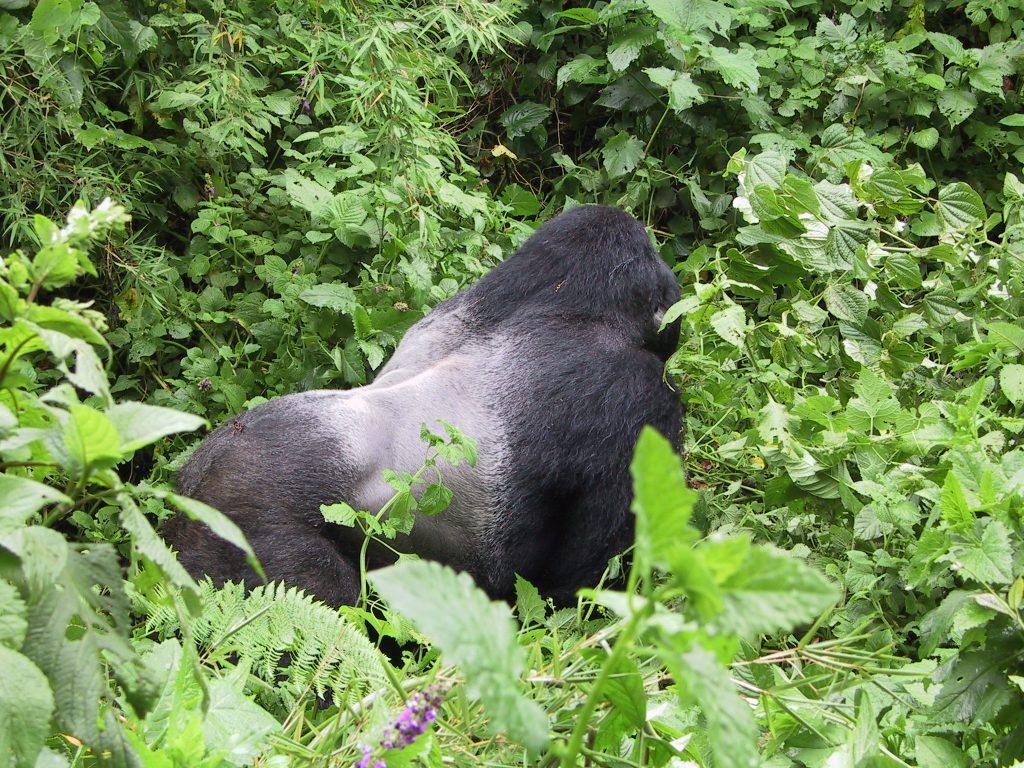 My reason for going to the other end of Uganda. The famous but threatened mountain Gorillas. To be able to be within a few metres of these huge, immensely powerful, intelligent, gentle animals is a truly amazing experience. This was in Mgahinga National Park. This mature male has become a silverback. I can relate to his greying 🙂 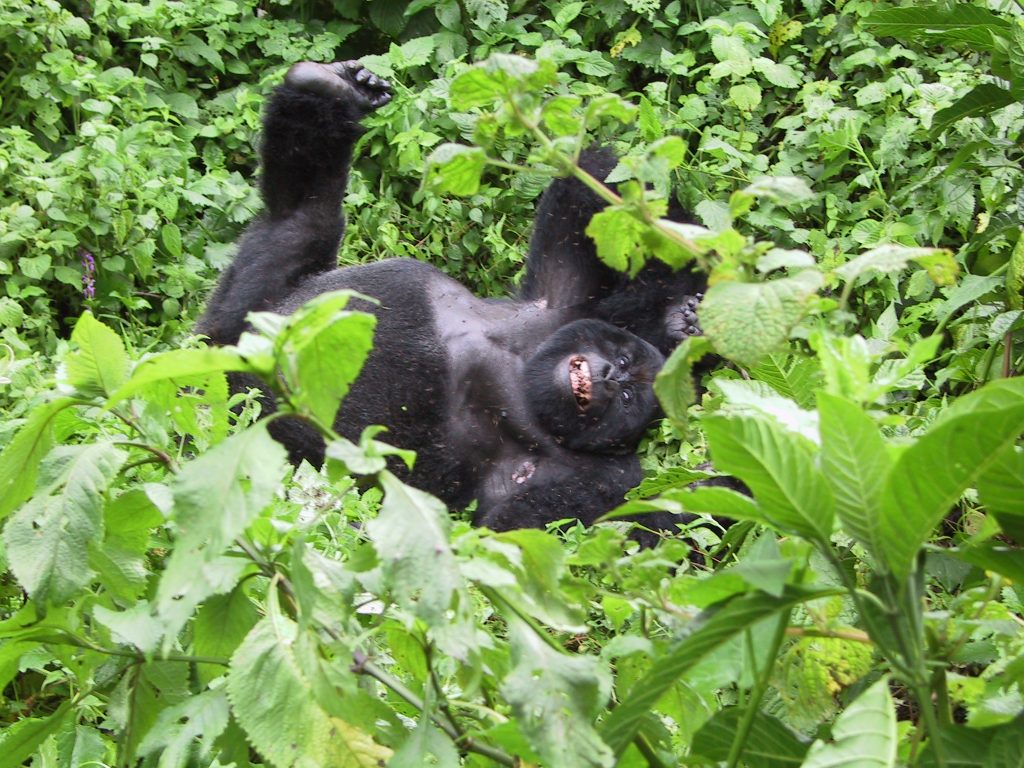 He looks playful here, but not long after he made some signals to show who was boss of this domain. They can move so quick and make violent movements and sounds that instil a strong level of respect in all observers. It is all bluff of course though I have no doubt if he had to get aggressive, there would be few creatures that could threaten them, humans excluded. We have done a great job of wiping them out. 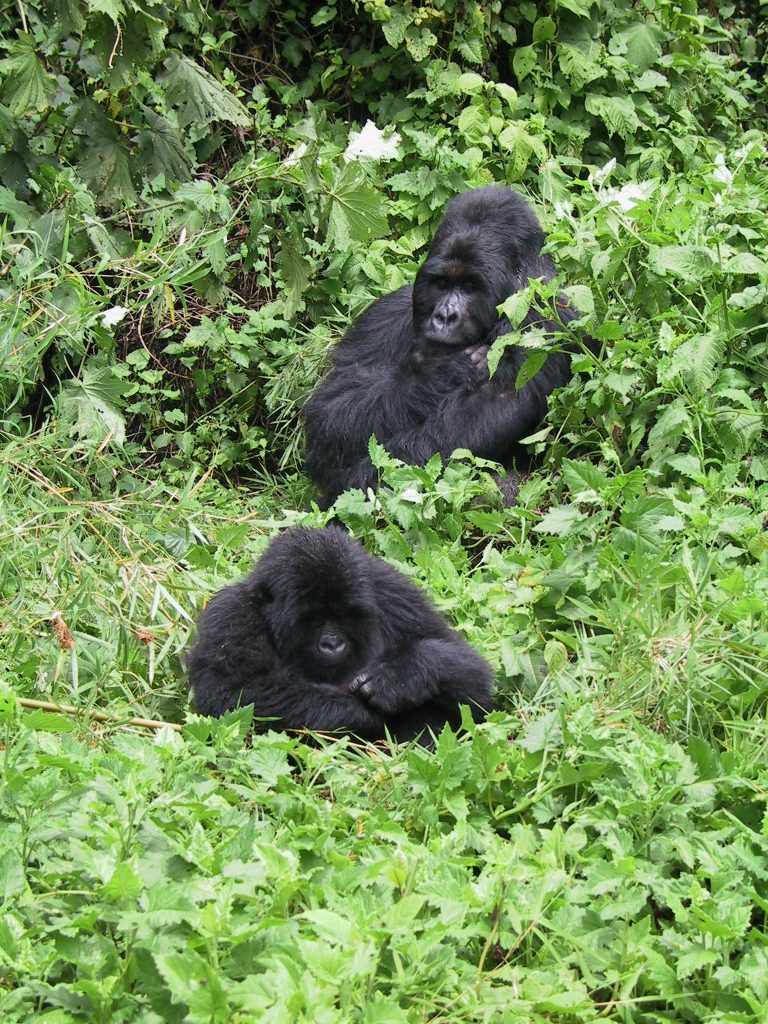 We had to search for over 2 hours to find them. I was starting doubt that we would find them. The guides go to where they were the day before, then attempt to follow their tracks. Roaming buffaloes confuse the tracks, so we walked around in circles, up hill and down dale, through thick forest. This is a younger silverback, and a juvenile in the foreground. The silverbacks weigh close to 300Kg, and have little fat. One big ball of muscle. You have to see them up close to truly appreciate their massive size. They are totally vegetarian. Their diet is bamboo leaves, certain barks, and a variety of other leaves. 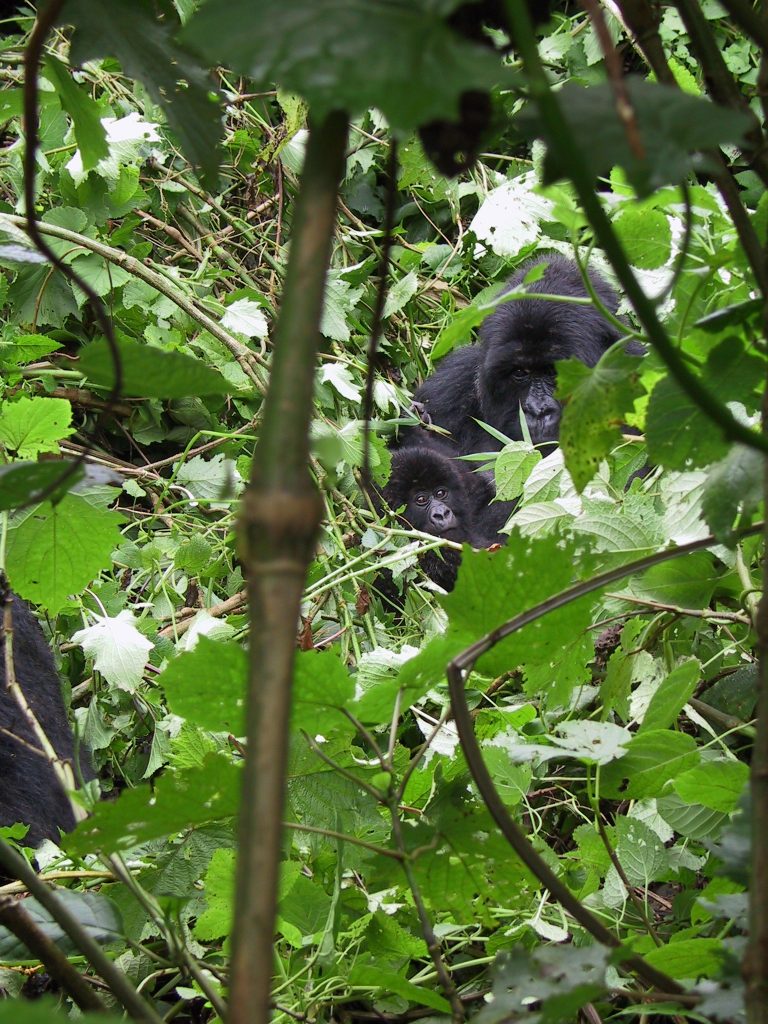 We couldn’t get close to mum and her baby. I’m sure the silverbacks would have made their displeasure known if we ventured too close. Only 6 people per day are allowed to view the Gorillas, and strictly for only one hour maximum. If we have any sign of being sick, we are not allowed to see them, and we definitely are not allowed to touch them. They have no resistance to human diseases. 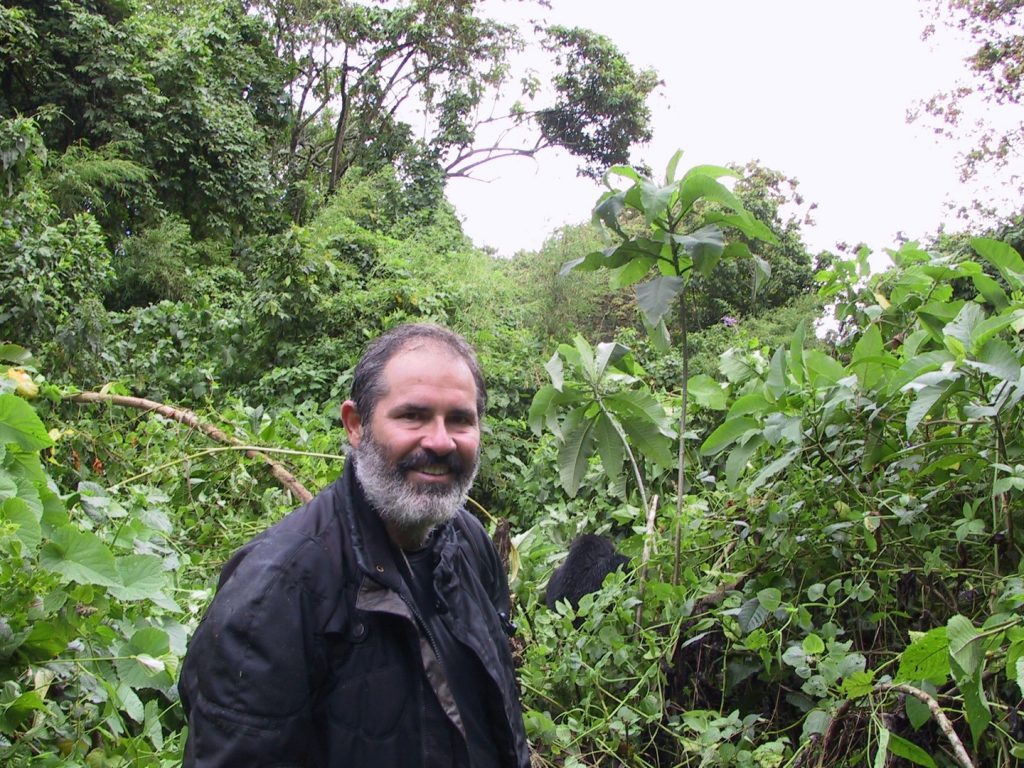 Getting a bit wild and wooly 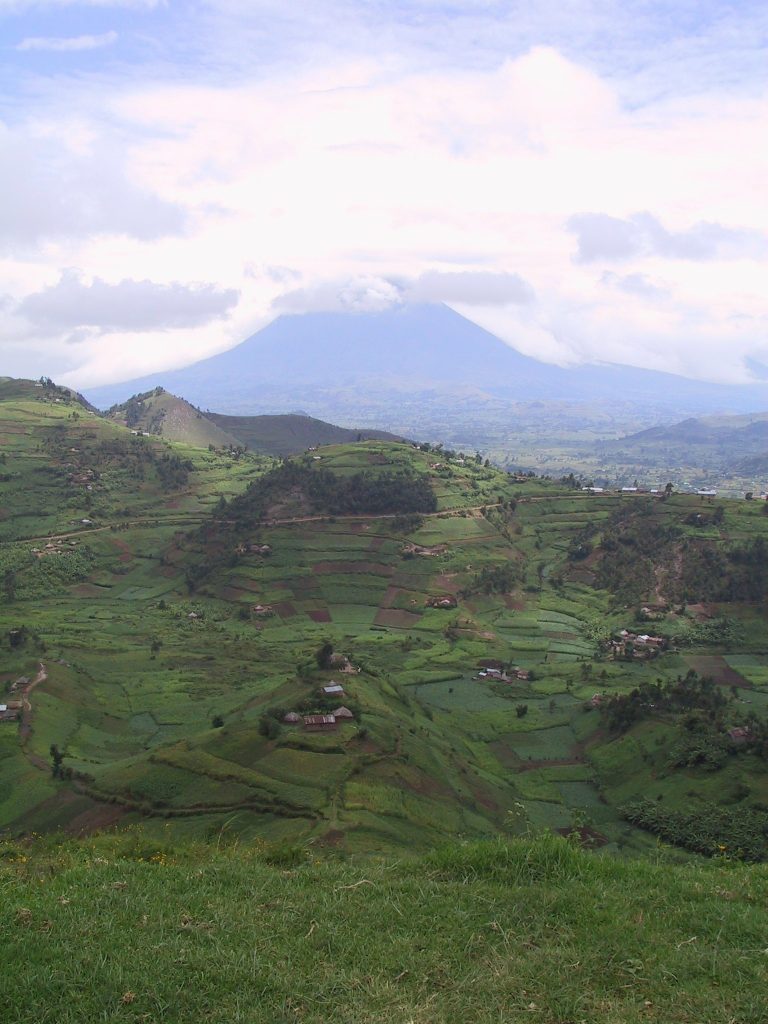 On the way from Kisoro back to Kampala. Looking over the cultivated hills, with three volcanoes in the Congo (only one visible thanks to the cloud cover). The ride from Kisoro to Kabale is about 85km of great dirt roads through the mountains. It is only 27km by GPS so that gives you an idea of how twisty it is. getting there was wet and slippery, but coming back the next day, it was dry and mostly really good traction. I was able to leave the Gorilla park at 1pm, and get all the back to Kampala by nightfall. I was told that it is almost impossible to do it in one full day, even on a bike. 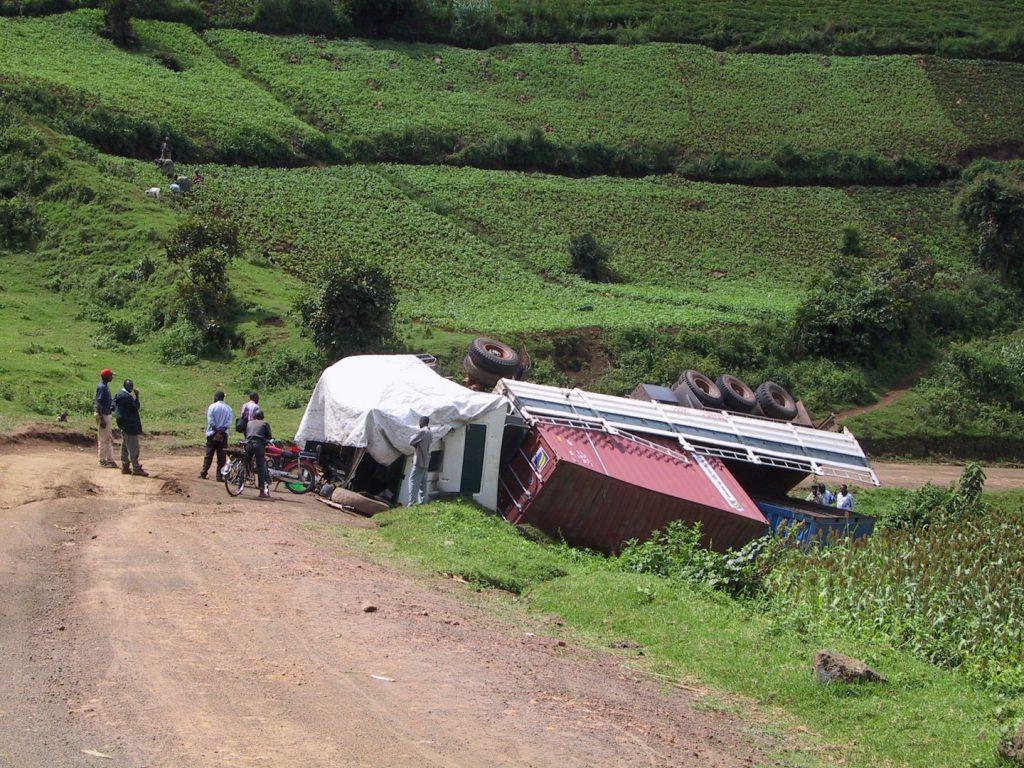 A common sight all throughout Africa. Truck crashes are incredibly frequent. I see several every day I ride.

Well, I’m off for Northern Kenya now. I have had some news of really difficult mud conditions. While I hate mud, it is about time I had a bit of a challenge. Africa, like Asia is really too easy. I have no illusions about the problems I am about to face in Kenya, Ethiopia and Sudan. I’ve just learned that Ted Simond of ‘Jupiters Travels’ fame came to grief on the section of road between Moyale on the Ethiopian border and Isiolo, central Kenya. He broke his leg, and is in hospital in Nairobi. Ted is re-tracing his trip of many years ago. He is now 69, so you are never too old. You have to admire his courage, but it is a shame he injured himself. I hope that doesn’t put an end to his trip. I’m sure he was well aware of the possibilities, as all motorcycle riders have to be.